In this article, you will learn about writing a playbook with Ansible to provision the Azure SQL database. In addition, you will also learn about Ansible and its design constructs and concepts.

In this article, you will be introduced to the following concepts:

Ansible is a simple, flexible, open-source, extremely powerful tool that gives us the ability to automate common infrastructure tasks, run ad-hoc commands or scripts, deploy the multi-tier application, and simplify cloud provision or resource management tasks. It gives us the flexibility to launch commands on a number of hosts in parallel. In addition, it helps seamless deployment and effectively-and-efficiently manages the deployment process using playbooks.

In my previous article, we discussed a lot about automation. Let us dive deep into some of the concepts. In general, If you’re managing a smaller group of IT infrastructure, some IT developers and administrators manage the mundane tasks by logging into them via SSH or RDP, making the required changes on the servers. In some cases, it is a hard fact in the bigger estate, many of them have still adopted a legacy manual method to handle the repetitive tasks.

Let’s consider a scenario, the Administrator needs to make the same change to a default value in a configuration file. In this case, without automation, the administrator would manually login to the server and repeatedly make the required change. If the server estate is small and this could be a simple exercise. In addition, if every change were thoroughly documented, this process wouldn’t be a problem. But, you all would agree that almost every company in existence, in-house complex and custom set up—in most cases, multiple applications are built that involve several customizations to the servers and configuration. For example, In my case, most servers have complicated firewall rules and dozens of tweaked parameters in the configuration files. And even with very good documentation and process, the manual process usually results in error-prone execution and failure in successful implementation.

I bet, some of you might be the admins of such companies and might have faced one of the several aforementioned scenarios. If you wanted to set up a new server exactly like one that is currently running then you would need to spend a good deal of time going through all the documentation, configurations, installed packages, and custom settings; and then you need to spend a lot of time manually reinstalling, updating, and tweaking parameters everything to get the new server to run close to your old server.

I have used PowerShell or Perl or Python scripts in all the automation but I’ve yet to see a complete skeleton of the script that handles all edge and use-cases which synchronize multiple server configuration and deploy new code.

Using Ansible, it is easy to run shell or batch commands or database scripts or configuration script or python script or handle service or deploy the installation process. In addition, it also provides a platform for converting the tasks into idempotent playbooks.

Ansible designed to operate from the central servers or control servers that push the instruction out to all the target servers and run locally on the target machines with no extra resource overhead incurred to manage the internal process.

The first step is to create an Azure subscription if you don’t have one already. You can sign up for the free trial subscription and then get started.

Let us get started:

In my case, my login is associated with multiple subscriptions. You can type in az account list and list the one which you want to use for the Azure SQL database provisioning using Ansible.

To list the subscriptions, run the following az command:

Select the subscriptionId and set the AZURE_SUBSCRIPTION_ID environment variable using the export command.

Ansible reads the AzureSQLProvision.yaml playbooks specified as an argument to the ansible-playbook command and starts executing plays (or tasks) in the same serial order in which it is created in the YAML. 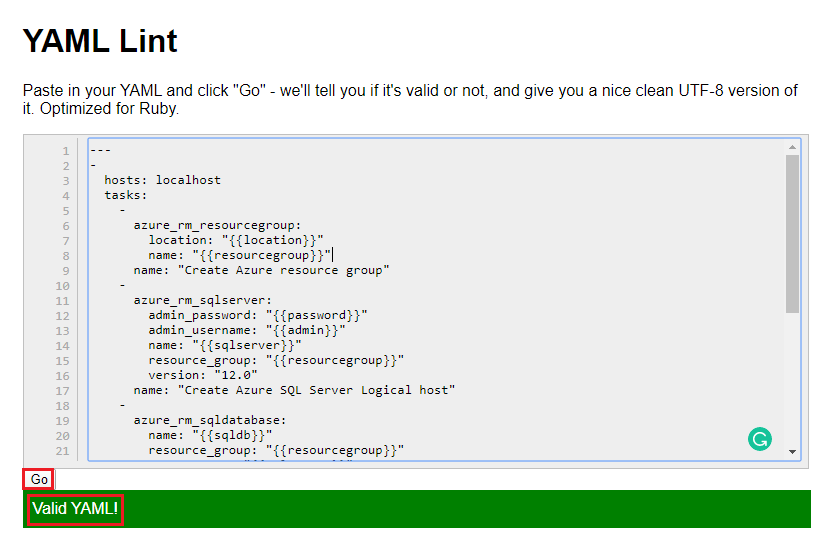 The first play that we declared, runs against the “localhost” host.

The localhost keyword is a special pattern that will match all hosts (similar to *). So, the tasks in the first play will be executed on all hosts.

Before running any of the tasks, Ansible will gather information about the systems that it is going to configure. This information is collected in the form of facts.


Finally, Ansible prints the summary of the playbook run in the “PLAY RECAP” section. It indicates how many modifications were made if any of the hosts were unreachable, or execution failed on any of the systems

In this article, you learned about automation abstracts, what Ansible playbooks are, what ansible components are consist of, and how to build Azure SQL database with ansible-playbook. You also see how to write and validate YAML—the core language used to create playbooks. In addition, you understand the working of playbooks by creating an Azure SQL database. In the upcoming article, you’ll see how to refactor the code and run the script using Ansible playbooks.

It is always easy to write a simple script and it may work fine for a very simple setup. However, if we have multiple applications spanning across a number of hosts, this will quickly become unmanageable—Ansible may be one of the solutions to such problems.

That’s all for now. Stay tuned for more details in my next article…