In this article, I’m going to explain in detail about the SQLPackage utility that is provided by Microsoft in order to automate database deployments. In my previous article regarding Data-Tier Applications in SQL Server, I have mentioned how to create a DACPAC and a BACPAC file from an existing SQL Server Database. The underlying technology behind creating the DACPAC and the BACPAC files is the SQLPackage utility, which helps to create those files.

The SQLPackage utility is a cross platform, command line tool and can be installed on Windows, Linux and MacOS. You can easily download the utility from the official website based on the operating system you are using. At the time of writing this article, the latest version of the utility is 18.5, however, it may change if you are reading it at some later point.

Let’s head over to the official website and download the windows MSI installer file and start installing the package on the local machine. 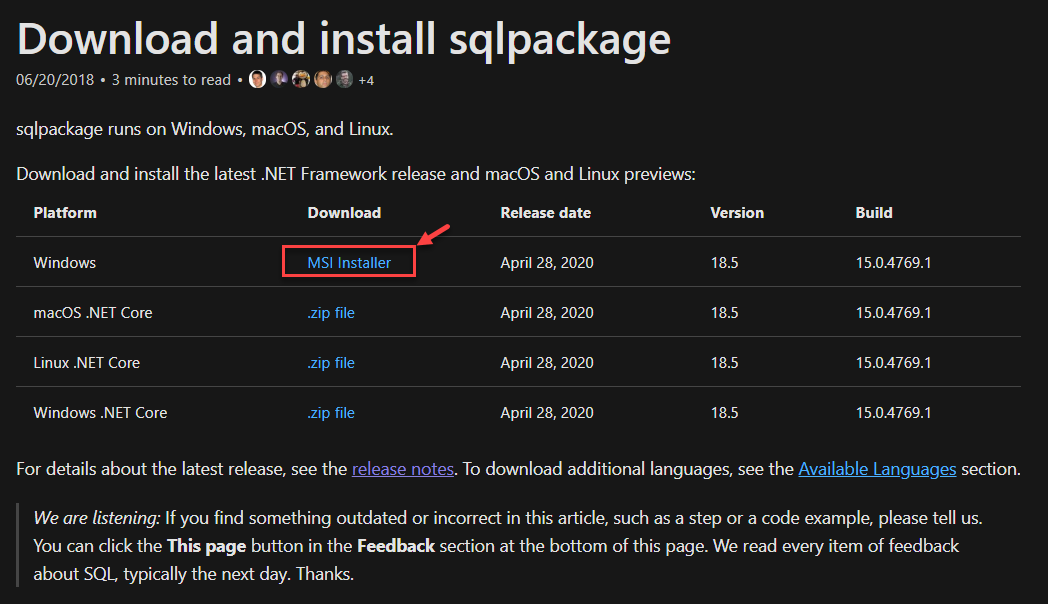 The name of the downloaded file will be DacFramework.msi. Click on the file and start installing it. 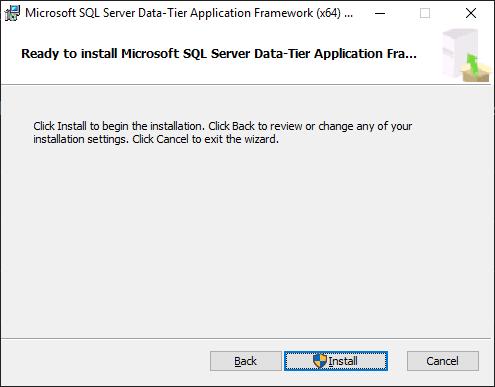 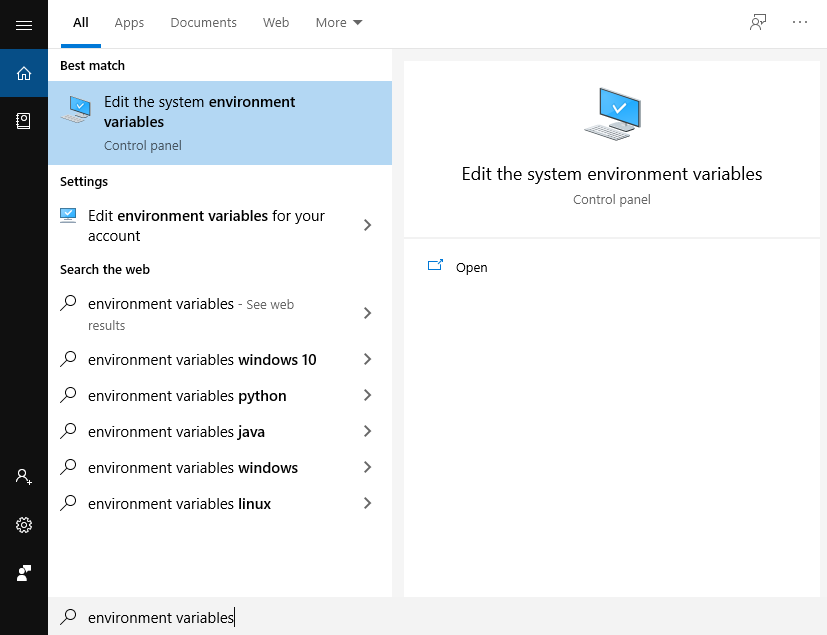 In the next step, click on the New button and then add the binary file path of the DAC program directory. In my case, the executable file for the SQLPackage is usually located at “C:\Program Files (x86)\Microsoft SQL Server\140\DAC\bin“. Once the path has been added click on OK. 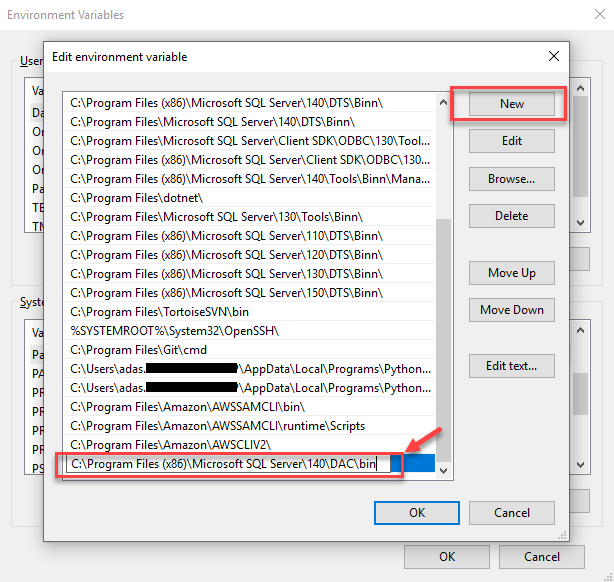 Now that the path of the executable has been added to the system variables, we can directly call the SQLPackage from the command-line. Start the command prompt and type SQLPackage and press Enter. If the package has been installed successfully and the path set correctly, you will see the options from the package. 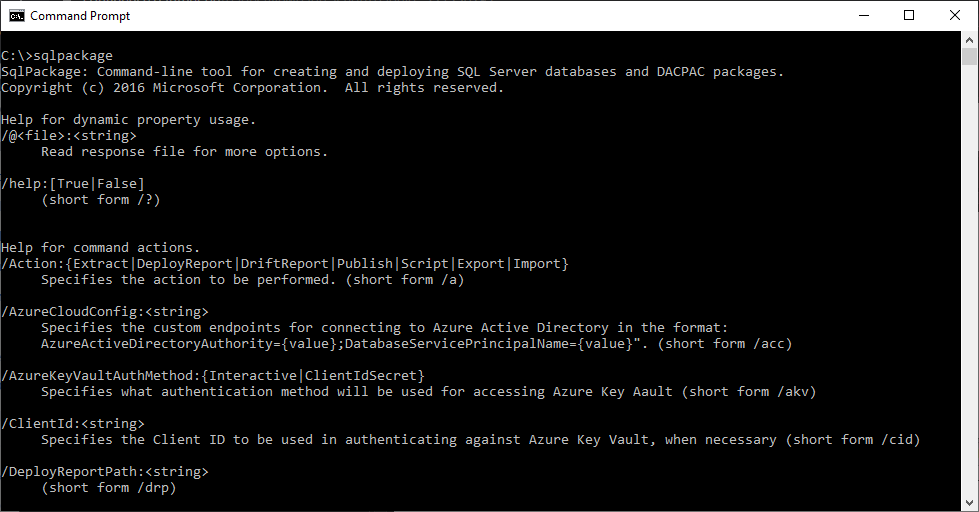 Using the SQLPackage Utility and Actions

The common syntax to execute the commands are “SQLPACKAGE <<PARAMETERS>> <<PROPERTIES>> <<SQLCMDVARIABLES>>“. You can add multiple parameters to a command to perform complex tasks. The SQLCMD variables are used to pass variable values to a parameterized script which can be executed against a SQL Server database.

The following actions are performed by the SQLPackage which are described below:

Parameters of the Publish Action in SQLPackage Utility

In the previous section, we have seen several Actions that are supported by SQLPackage. Now let us go ahead and learn the most important parameters that are available to be used within these actions. Apart from the parameters mentioned in this article, there are several others which are available to use and you can see those in the documentation.

For the purpose of this article, I am going to demonstrate the Publish action of the SQLPackage utility. The command to publish a DACPAC file is as below: 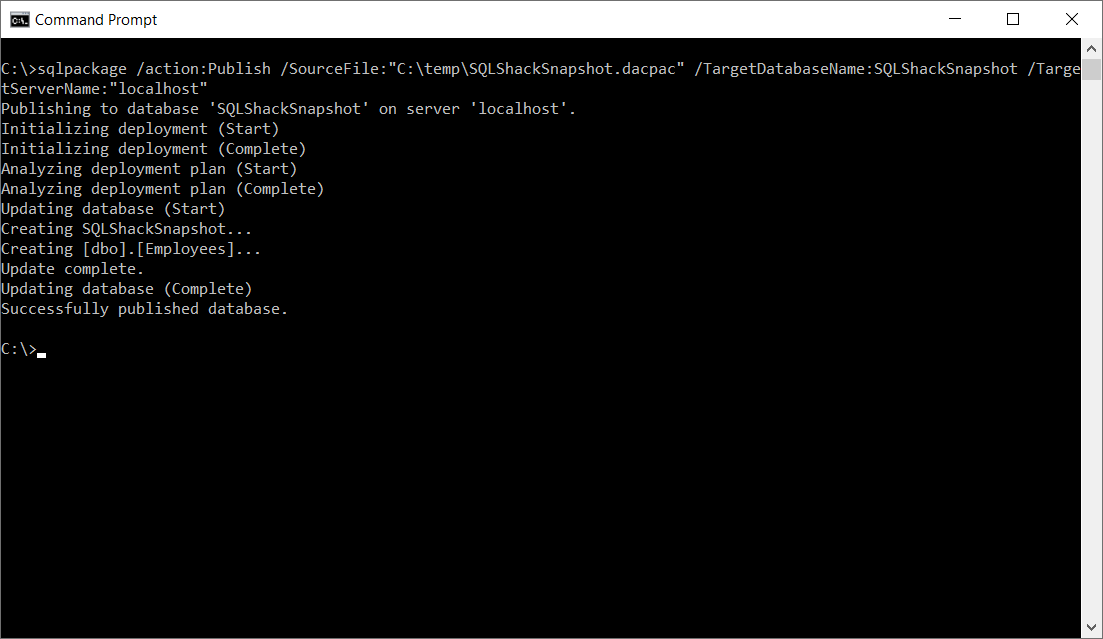 If you see the output in the above screen, you can see that the SQLPackage has successfully connected to the target server and then created a database based on the schema available in the DACPAC file. This utility can also publish to remote SQL Server machines instead of a local host or even to Azure SQL Database.

In this article, we have seen the basic features of SQLPackage utility. SQLPackage is an important utility when modern database development and deployment is taken into consideration. It can be easily used create new databases or updated existing databases with minimal configurations. In my upcoming articles, I will also explain about the other actions that are possible with this utility in detail.