In this article, we will learn how to user slicers to filter data in a Power BI report.

Power BI Desktop is one of the most popular report authoring tools that offers a variety of features for rich report authoring. Reports can vary in terms of the data volume that it reports. The report can have minimal data, as well as certain reports, can have overwhelming volumes of data in them. To control the volume of raw data in a report which an end-user may find challenging to analyze visually, typically rich visualizations are used to bring out the insights contained in the data in a visual and analytical way. While these techniques are efficient to abstract the volume of data, an end-user may want to scope the data based on few parameters to assess the data based on various scopes. While filtering the data prior to presenting it on the report given the report designer an option to scope the data, the next level of data filtering capability needs to be given to an end-user. One of the most common ways of filtering data while using the Power BI report is by using slicers in the report. 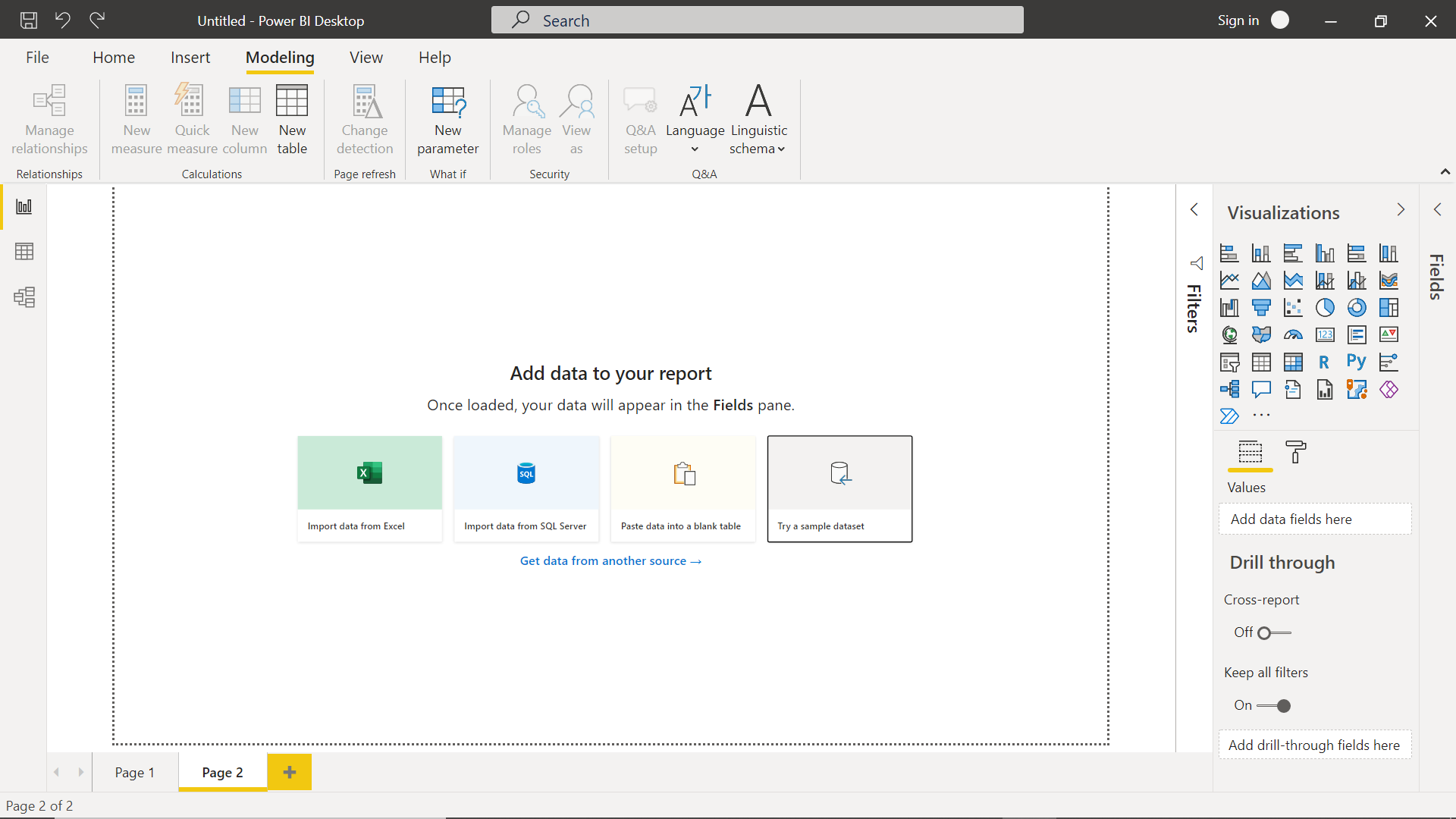 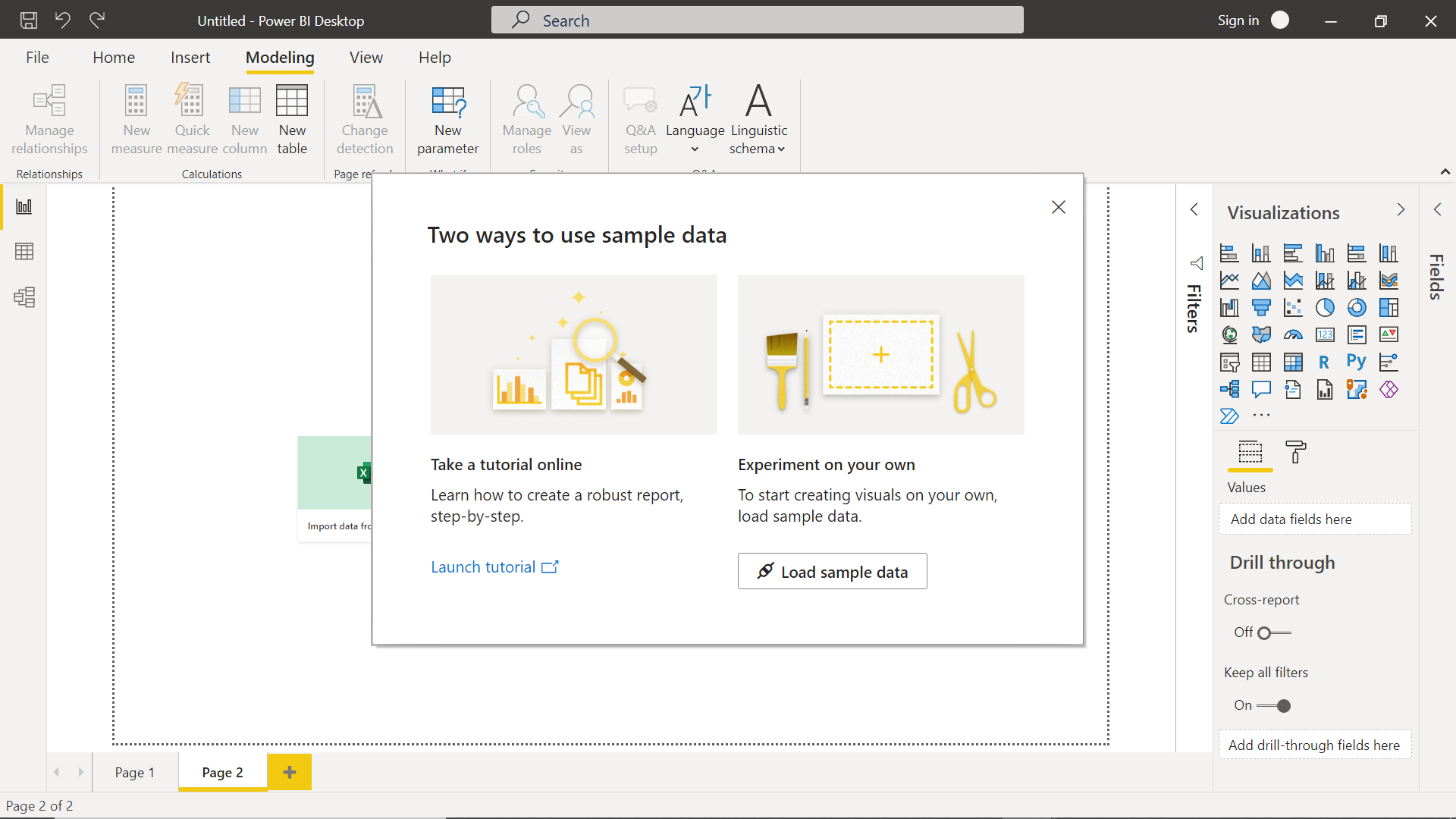 In the next step, we would be presented with a preview of the dataset as shown below. One of the datasets is financials and another one is called Sheet1. We can click on the desired dataset to preview the data in it on the right-hand side of the wizard as shown below. We can optionally choose to transform the data or load it straight away. For now, we will select both the datasets and click on the Load button to load this data in our report model. 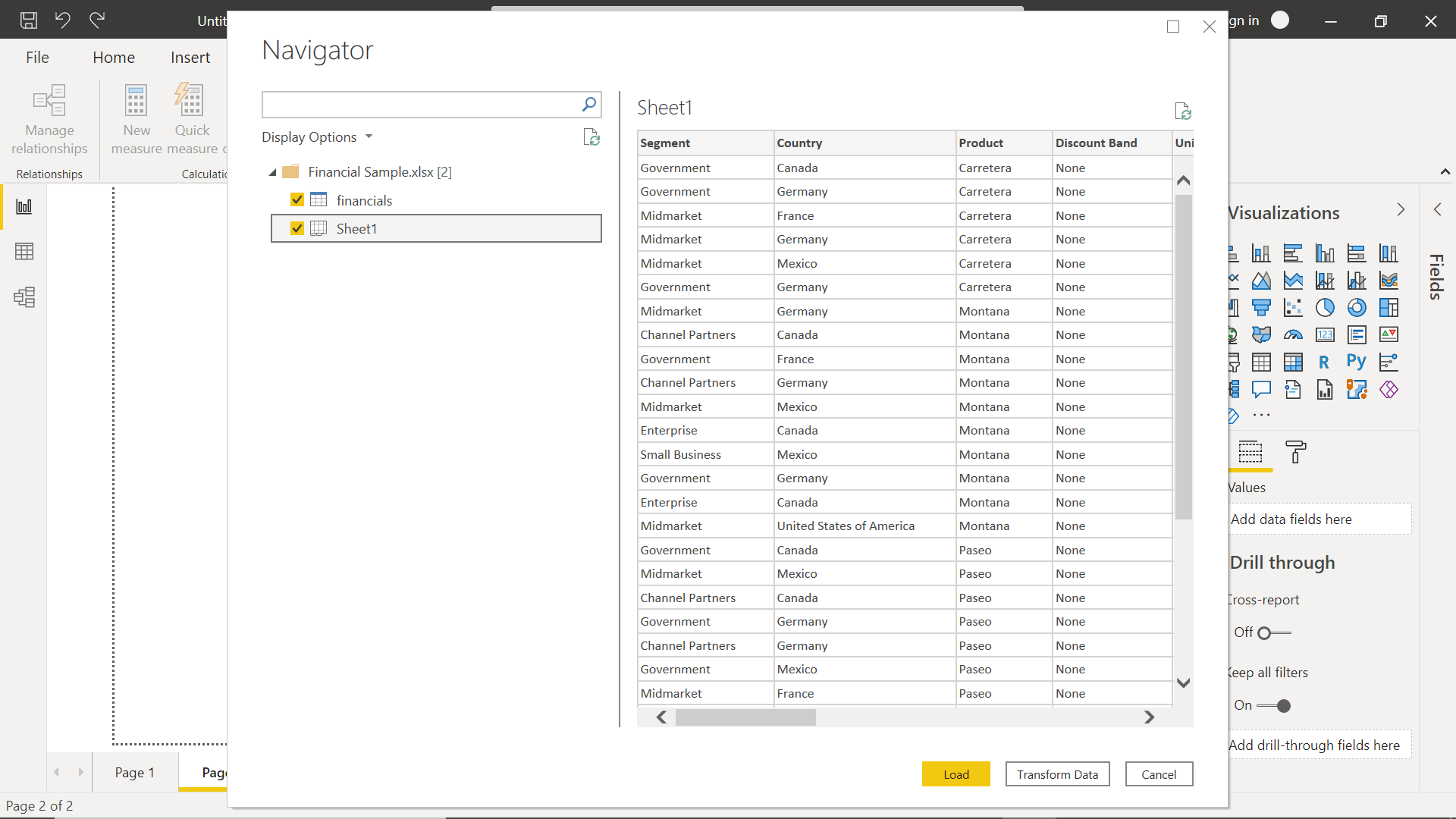 Once the data is loaded, the would be get listed on the right-hand side in the fields pane. These fields are now ready to be used with different visual controls available in the visualizations pane. 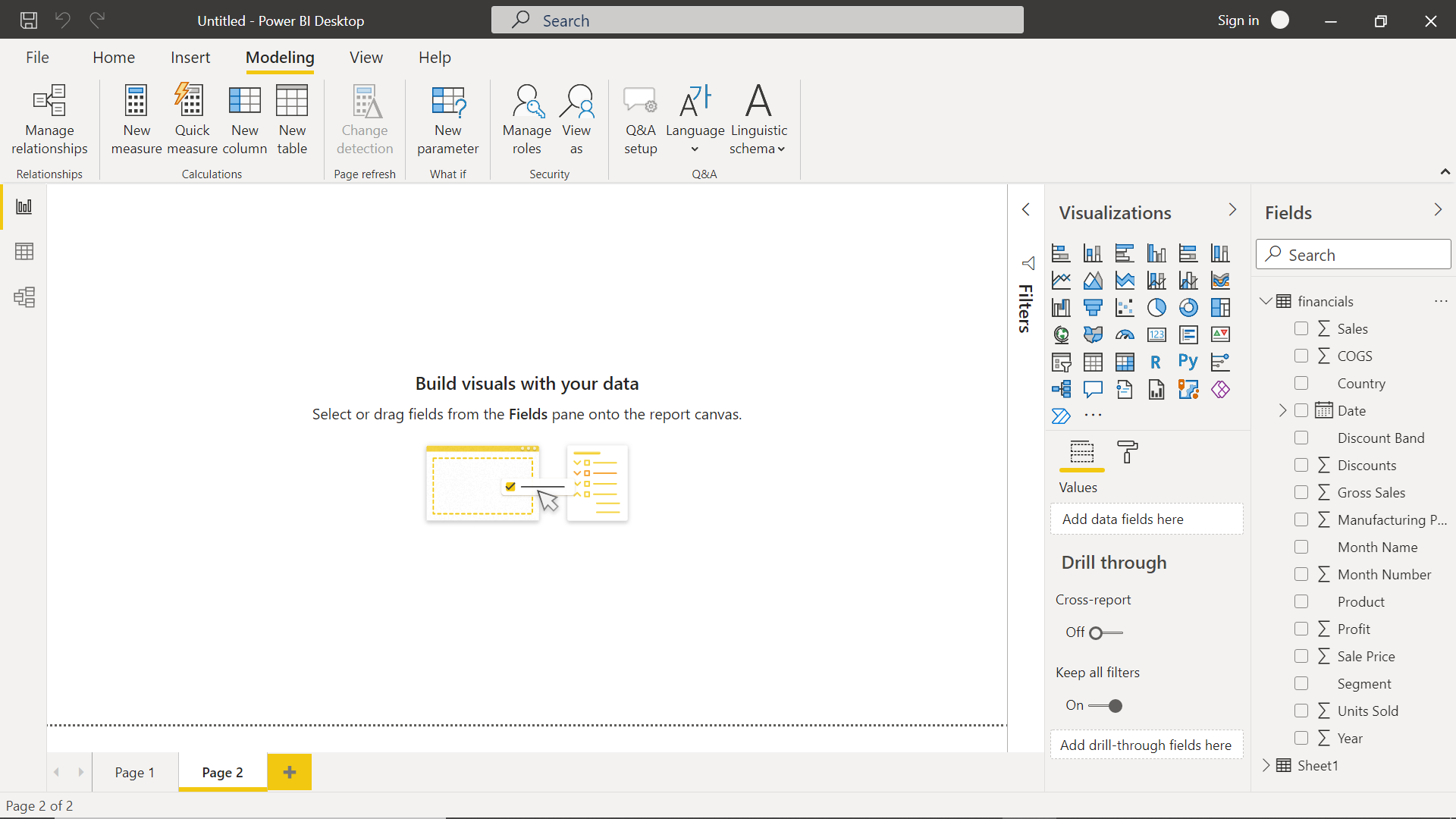 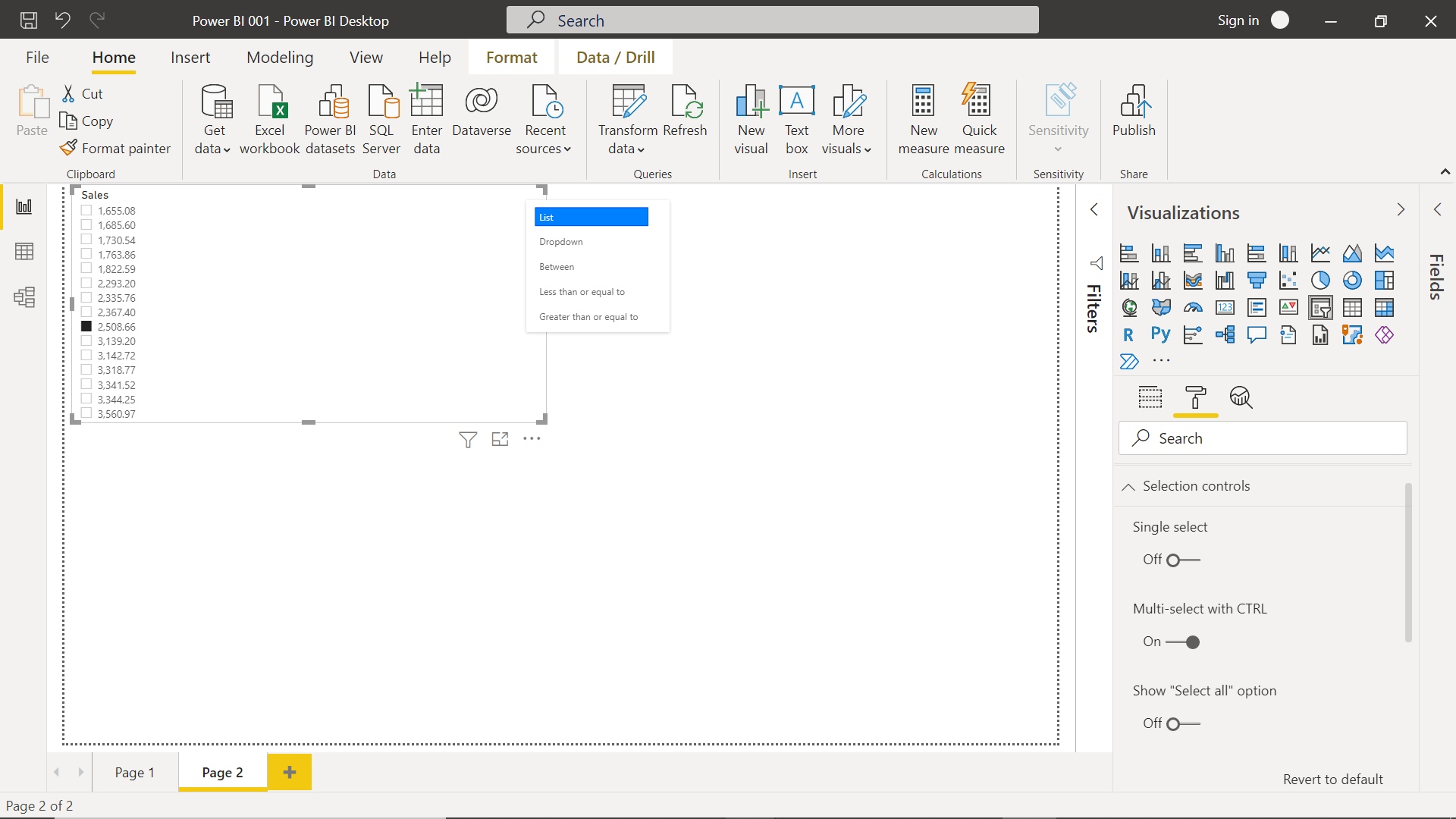 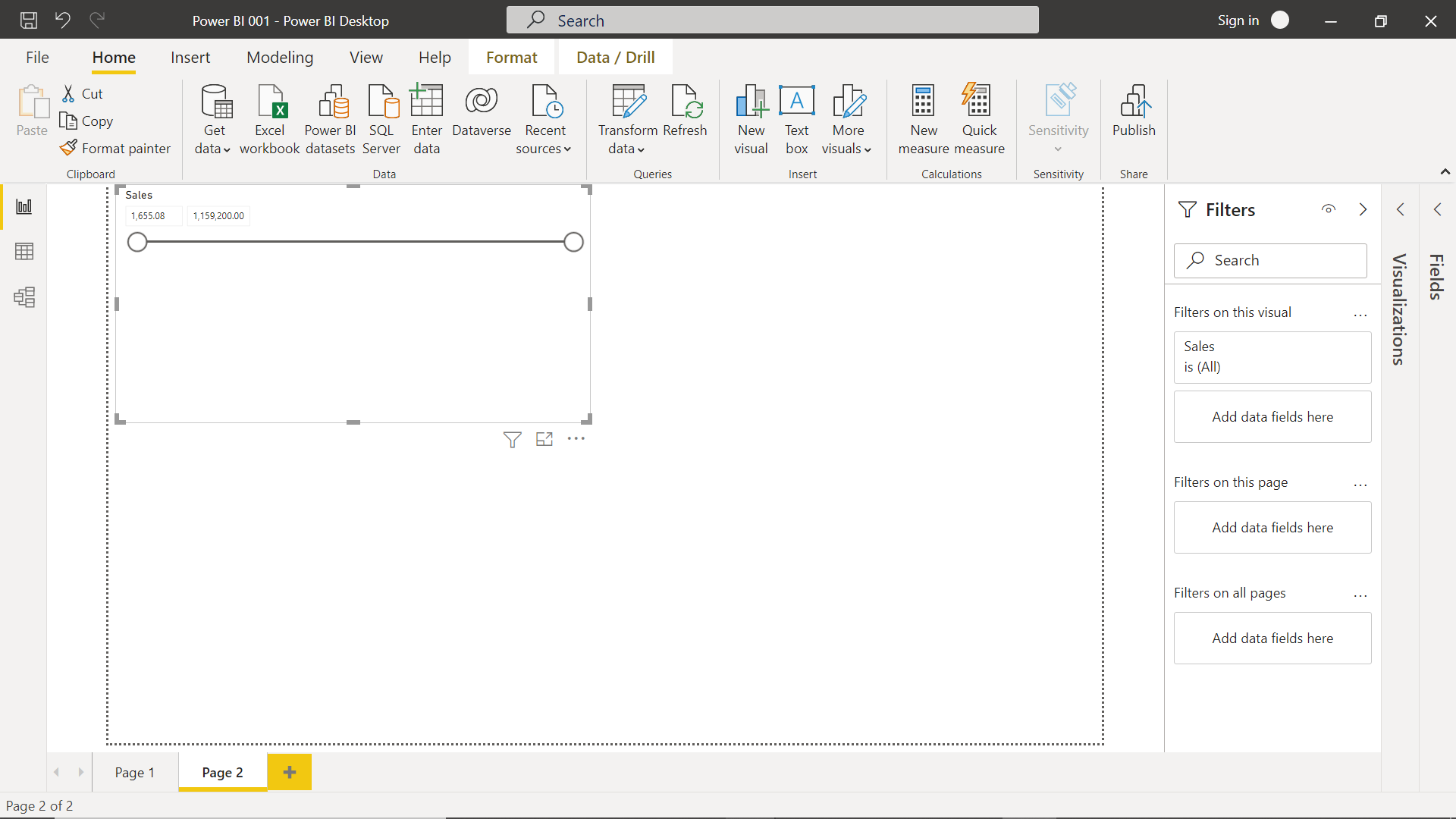 Now let’s say that we have a very simple slicer requirement, where the value of the slicer is a limited set of character values. For example, let’s select Country as the slicer. In our sample dataset, we just have a few countries in the list, so the slicer can be used in its default form and the user can select one or more countries from the list as shown below. 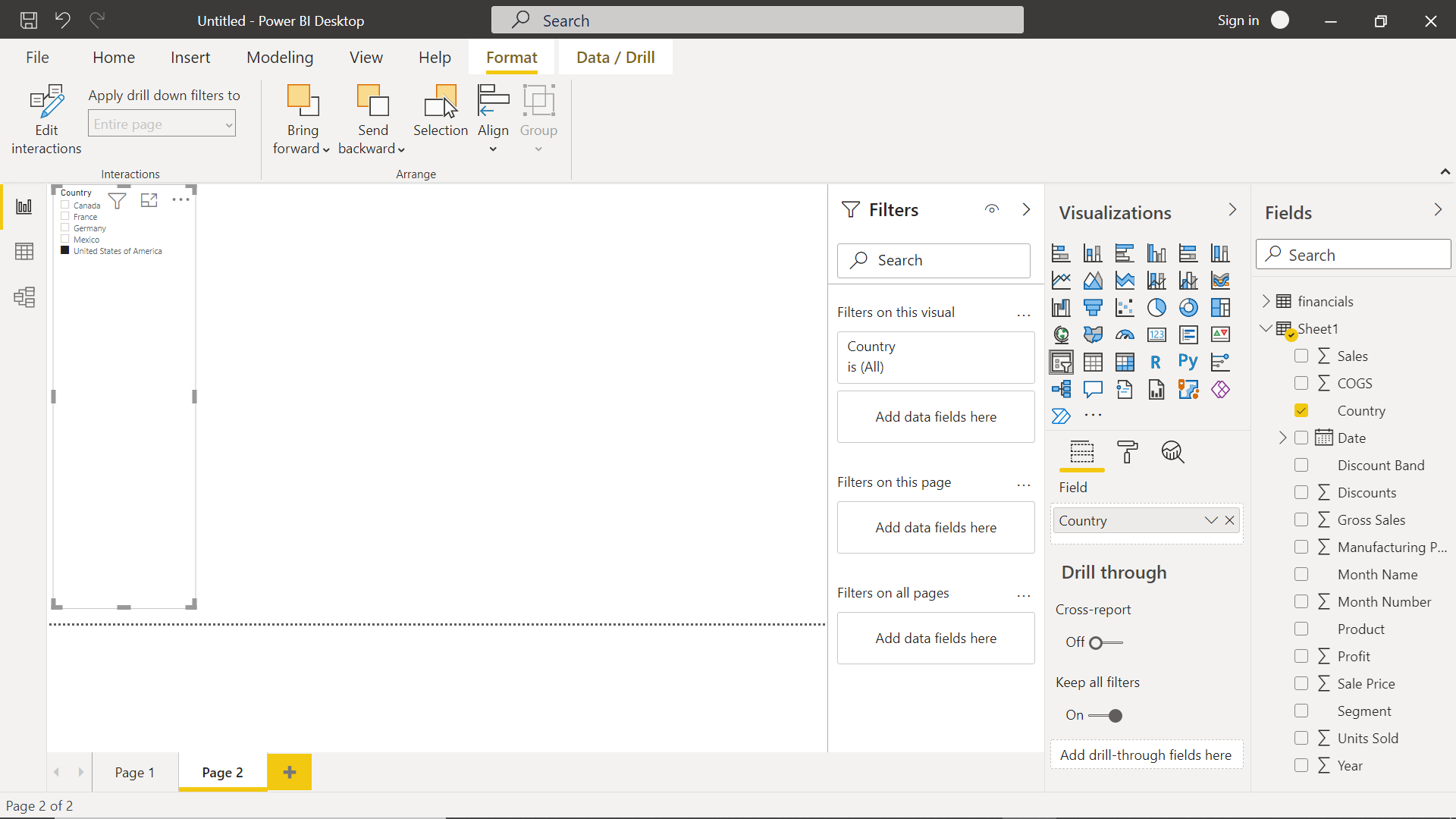 At times, the size of the font may become an issue in focusing on the list of values and the way it appears on the report layout. One can click on the focus mode icon on the top-right corner of the control to zoom into the control and focus on every detail inside the control as shown below. 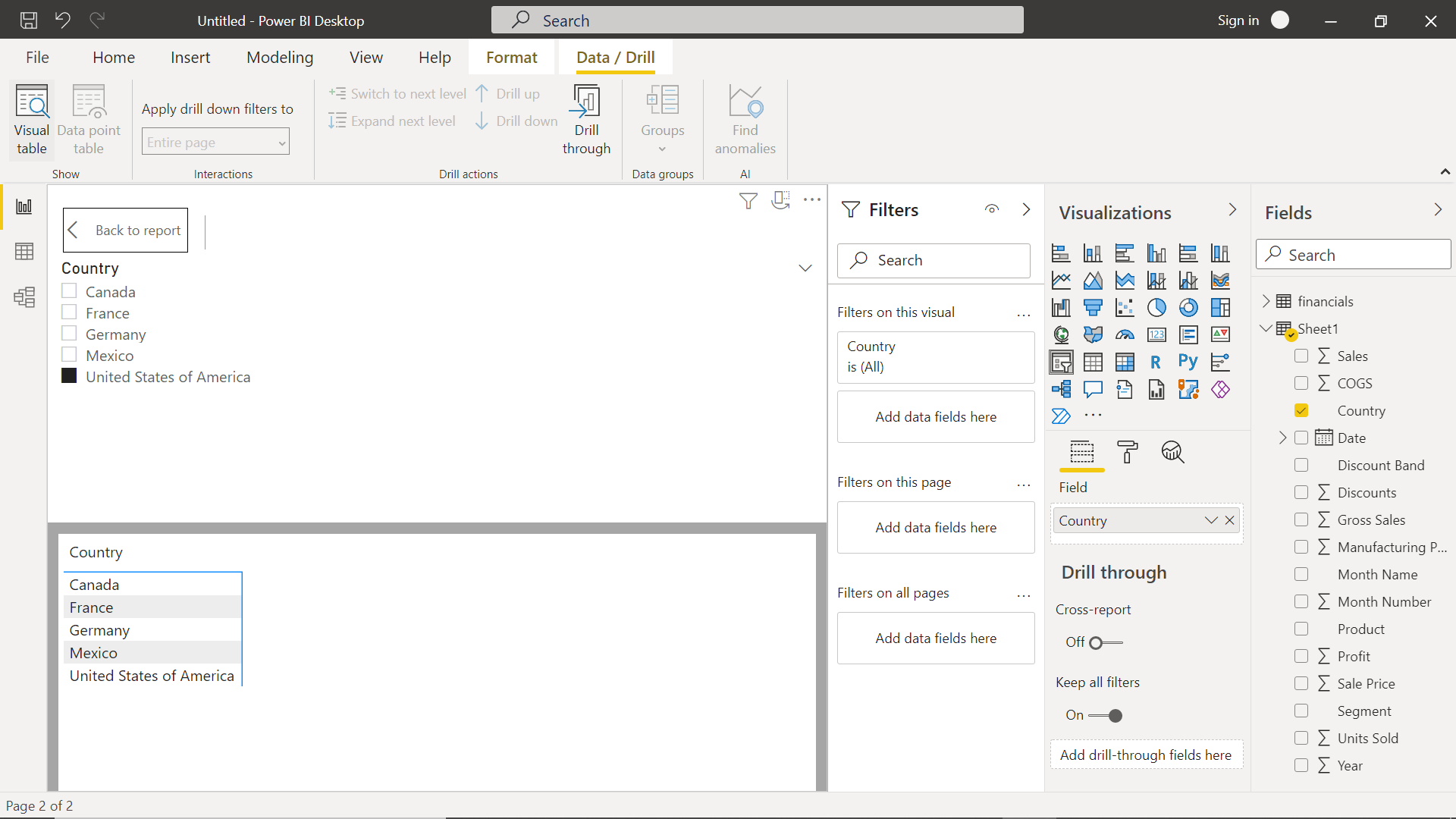 Click on the Back to Report button to navigate back to the design mode. The slicer is the user to filter or scope the data in other elements on the report layout. To realize the effect of the slicer on other data, we can simply add a table control on the report and populate it with a set of fields. This will populate the table with all the records for the selected fields as shown below. 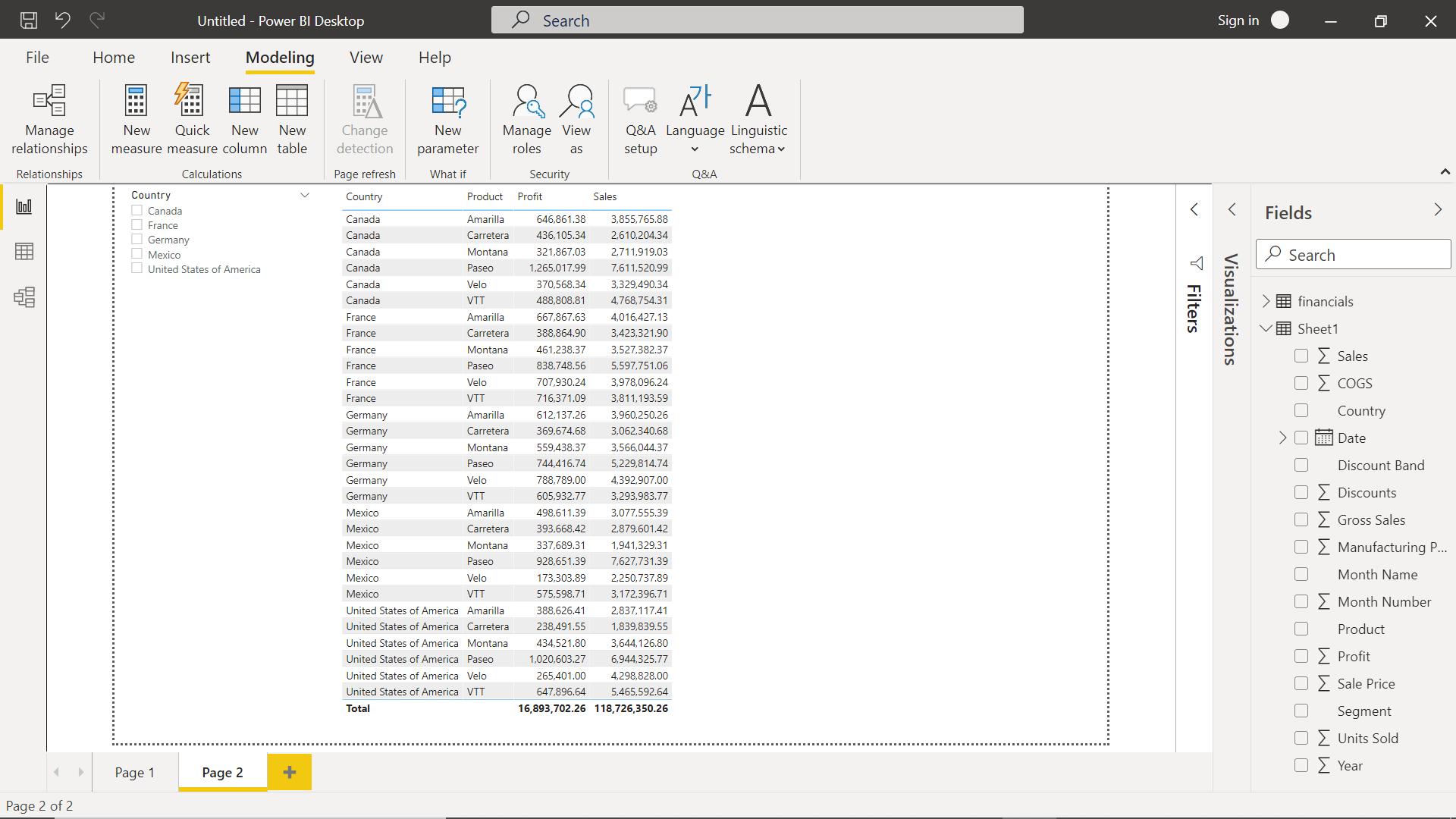 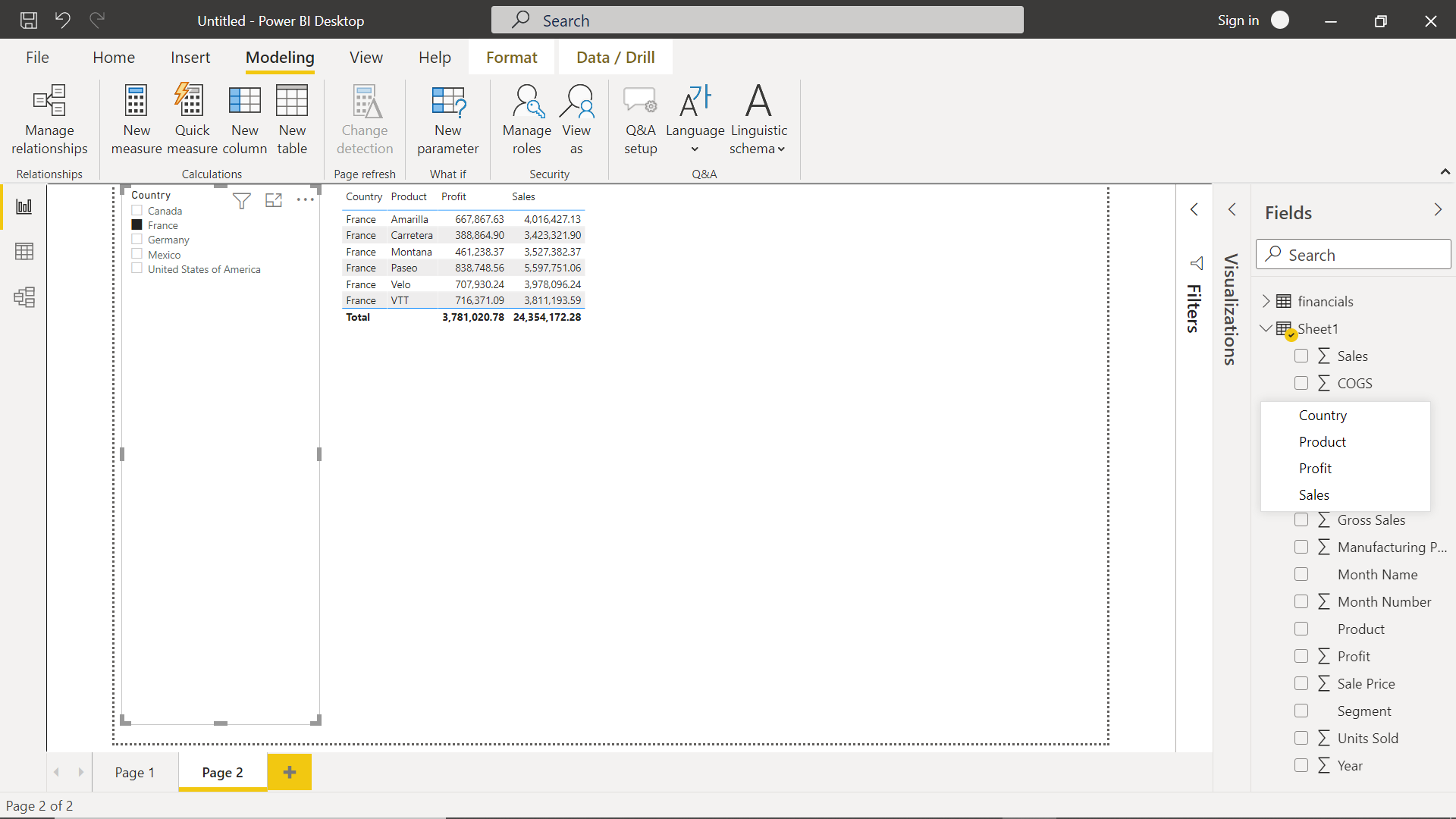 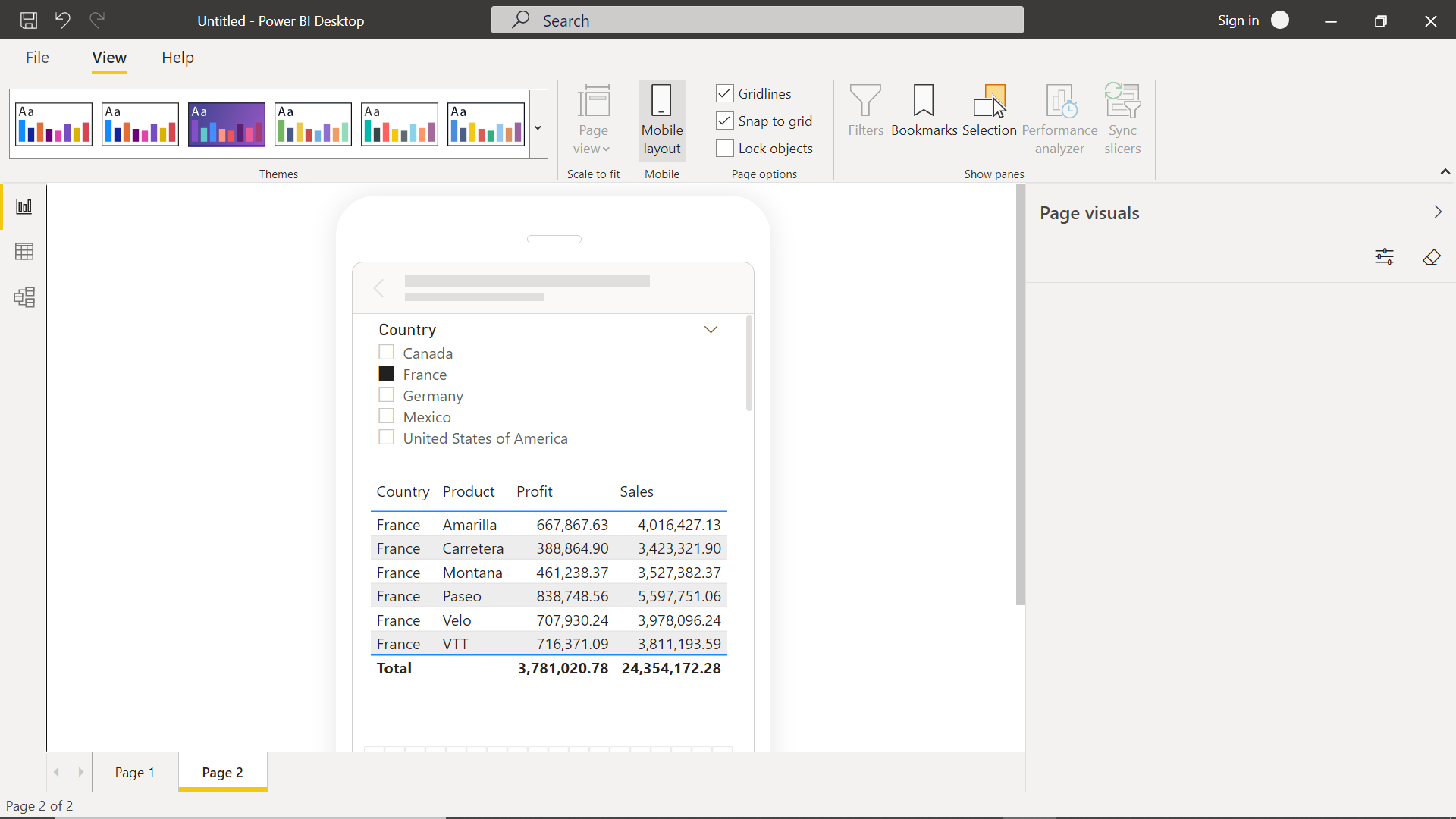 In this way, one can use slicer control to enable an end-user to slice the data as per one’s need. While we discussed the slicer control with just one data table, in real-life scenarios, the report may contain several visualizations. Using slicer control in such a variety of visualization provides an easy way for the user to control the scope of data across the entire report.

In this article, we learned how to populate sample data in a Power BI report using Power BI Desktop. We learned the user of slicer control, how to control the method of presentation depending upon the nature of data and finally, we learned how to use it with visualizations on the report layout.