In this article, you will see how to use the Extract function in Power BI to extract information from columns in a Power BI dataset.

For those of you who are not familiar with Power BI, it is Microsoft’s data analysis and BI tool. It is available under a number of different licenses (see this Power BI article for full details licensing) but in this article, we use the free Power BI Desktop which is available free.

While Microsoft’s Power BI comes with a lot of options for data analysis, one of the most exciting options is its ability to extract specific information from within a column. For example, with Power BI you can extract year, months, days, hours etc. from a complete date. You can also create new categories using a range of data.

In this article, we will look at a number of examples of using the extract function in Power BI.

As Power BI is a data analytics tool, it goes without saying that you need to import data into Power BI before it can be analyzed. To demonstrate the use of the extract function in Power BI, we will use a freely available dataset on Boston crime that contains information about incidents that took place in Boston. The dataset is freely available at this Kaggle link. Download the dataset. You will be using the “crime.csv” file from the downloaded dataset. Follow these steps to import the dataset into Power BI.

Open the Power BI desktop application. From the dashboard click the “Get Data” option (in the top menu) and then select the “Text/CSV” option from the list of options that appears asking you to define what type of dataset you are working with. Finally, click “Connect”. 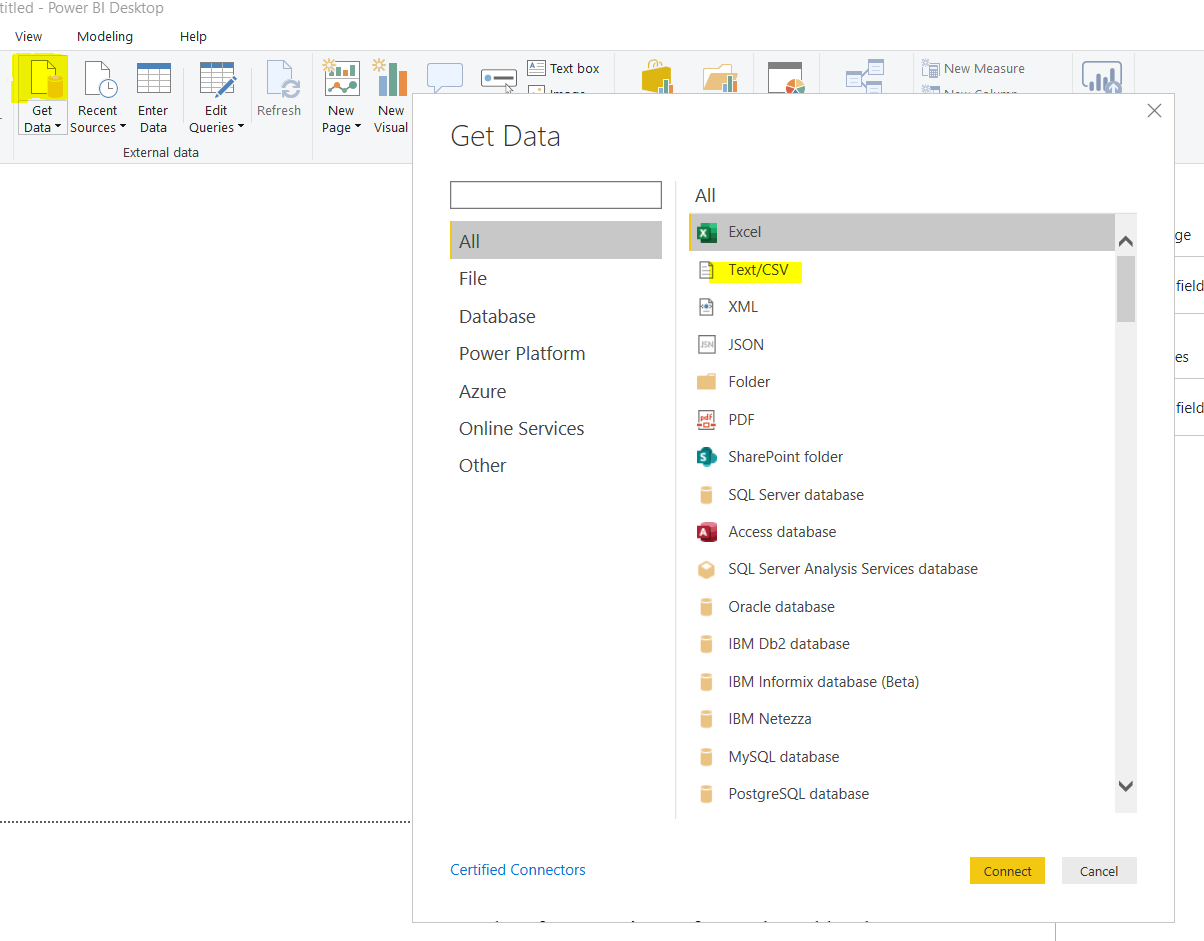 The dataset will now be imported into Power BI (see screenshot below).

Now you have two options:

The extract function in Power BI is available in the Query editor, so please click the “Load” button to import the data.

In the query editor, you have two options when using the Extract function. You can access the “Extract’ function from the “Add Column” menu as shown below.

The other way to select the “Extract” function is via the “Transform” which is in the top menu as shown below.

Let’s look at both of these in more detail.

Let’s first see a couple of examples of extracting content using the extract function in Power BI from the “Add Column” menu.

To do this, click the header of the “UCR_PART” column, go to the “Add Column” option from the top menu, and then select the “Extract” function. From the dropdown list, select “Text After Delimiter”.

You will now see that a new column has been inserted after the last column called “Text After Delimiter”. You can see that the column only contains the numbers in the form of text i.e. “One”, “Two”, “Three”.

Next, let’s try changing the text numbers into digits. You can do this by clicking “Replace Values” from the “Transform” menu as shown. 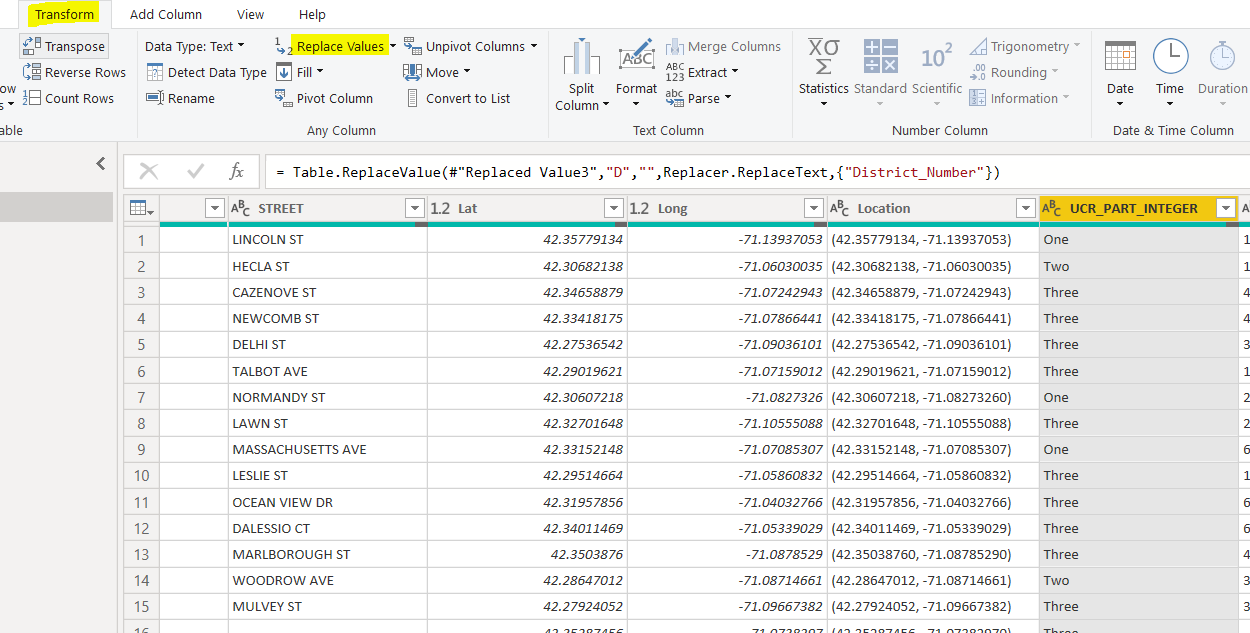 In the replace values dialogue box, replace the text “One” with the digit ‘1’. Repeat the same step to replace “Two” with 2, “Three” with 3 and so on.

If you look at the newly created “UCR_PART_INTEGER” column you will see that it contains “ABC” before the column header name, which shows that it is a text column. However, the “UCR_PART_INTEGER” column now contains integers. To convert it to an integer type, click the “Detect Data Type” option from the “Transform” menu and you will see that the column type is changed to numbers as shown below:

Extracting the Day from a Date

With the extract function in Power BI, you can also extract information such as the year, month, day, or time from a date-time column.

We will extract the day of the month from the “OCCURRED_ON_DATE” column. If you look at the column, the day of a month is located inside two forward slashes. To extract the day, you use the “Text Between Delimiters” option of the extract function in Power BI. 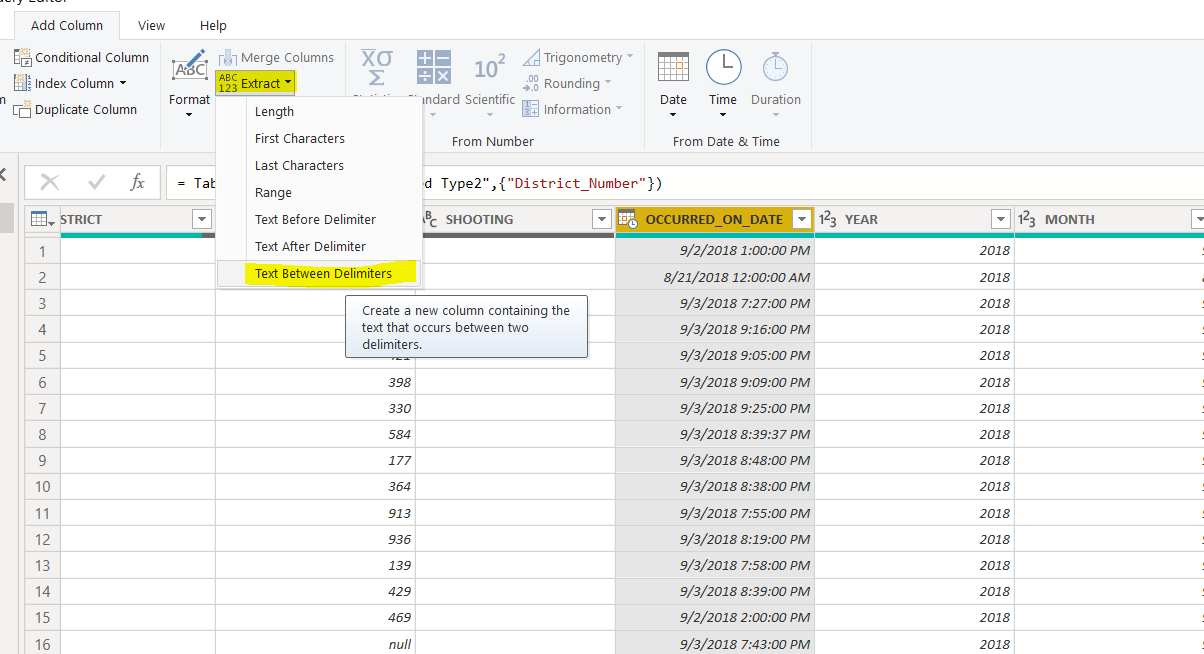 Enter a forward slash “/” in both the “Start delimiter” and “End delimiter” fields as depicted by the following figure and click the “OK” button. This selects what is between the first two forward slashes in the field.

You will see a new column containing the day of the month now appear at the end of the list of columns. Rename the column to “Day of Month”.

Click the column header and drag it next to the “MONTH” column. Look at the following screenshot for reference. Here you can see that Day of Month column contains the day value as shown in the “OCCURRED_ON_DATE” column. 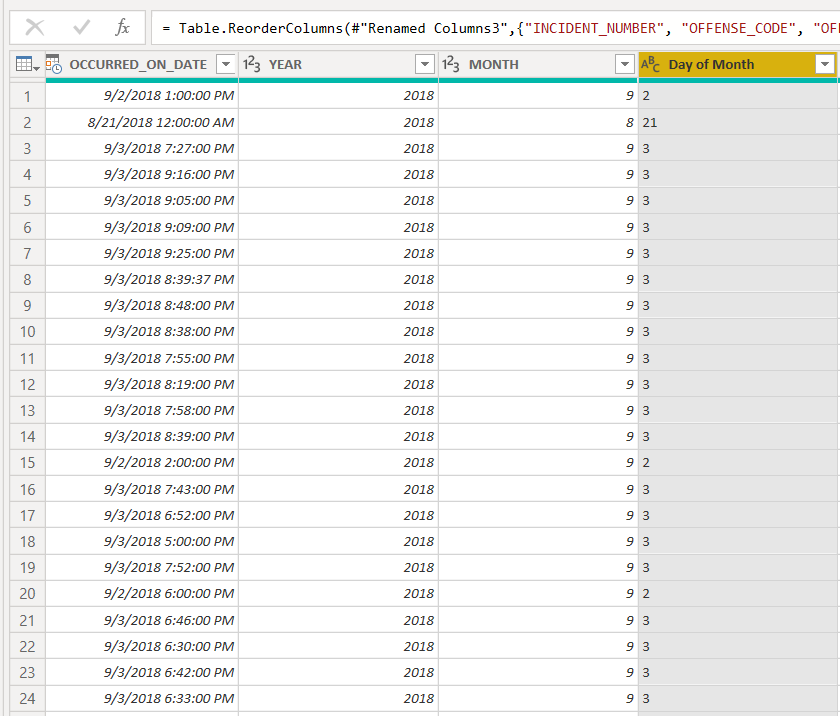 Extracting the Time from a Date

Like the day, you can also extract the time from the “OCCURRED_ON_DATE” column. You can see that there is a single space between the date and time information. This means that again you can use the “Text After Delimiter” option from the extract function in Power BI to extract the time.

The type of the newly created time column is “Text” at the moment. Again click the “Detect Data Type” option from the “Transform” menu, the “Time” column will be converted into a date-time column. This is shown by the clock icon which will now be visible before the column name in the “Time” column. Look at the following screenshot for reference.

As mentioned in the introduction, you can also use the Transform menu to extract text from a column. However, no new column will be created. Instead, the extracted text will replace the text in the selected column. Let’s look at an example.

Let’s extract the last two characters from this column. Select “Transform” from the top menu and then click “Extract”. From the dropdown list, select “Last Characters

In the “Extract Last Characters” dialogue box, enter 2 and then click OK.

You will see that the DISTRICT column will be updated to now contain only the last two characters from the original values.

Since we want the DISTRICT column to contain numbers only, we will need to remove the letters by replacing them with empty spaces. To do this select the “Replace Values” option from the “Transform” menu.

You will see that the DISTRICT column now contains only digits.

Finally, remember to change the type of the DISTRICT column from text to numeric by using the “Detect Data Type” option from the “Transform” menu.