Password security is a critical requirement for any organization. It starts with using a complex password with combinations of alphabets, digits, special characters. We also enforce security policies such as account lockout after using an absolute number of incorrect passwords, password change policy. The service account is useful in SQL Server for running services, linked servers or applications. Usually, we use a complex password for these accounts but do not change them frequently. We stored these service account with passwords in password-protected Excel or third-party tools such as Keepass password safe. We do not want unauthorized persons to use these accounts and passwords as they can make undesired changes in the database services.

Suppose we store these passwords in a SQL table and restricted access to that table. However, there is a chance that users with a higher level of permissions can access passwords easily. It might be a security breach and unauthorized data access. Another alternative could be storing passwords in the SQL table in an encrypted form. If any user tries to access the encrypted table, he will get an encrypted password, and he cannot use it for database connections without the encryption key.

Let’s understand the encryption and decryption using the following example.

Original text: SQLShack is a popular site among DBA and developers for Microsoft SQL Server.

You can easily read the above text and understand it. Now read the below sentence.

Are you able to understand the above-specified encrypted text? No, right! It is absolute gibberish. We cannot understand it unless decrypted.

Python is a high-level programming language that we can use for complex data analytics, manipulations. We can use Python for encrypting passwords and later, we can store these passwords in SQL tables.

You should explore Python scripts and be familiar with the Python language before going through this article. You can go through Python articles for it.

If you are familiar with it, you can explore articles in the Azure Data Studio category, here on SQLShack.

Let’s understand a few useful terminologies before proceeding with Cryptography in Python.

It is a standard text that is readable and can be understood by the user. In other words, it is the text without encryption.

It is the output text after applying cryptography on the plain text. It is difficult to understand and remember the ciphertext.

We convert plain text into ciphertext using the encryption process.

It is the reverse of the encryption process. In this, we convert ciphertext into the plain text.

In the context of storing passwords into SQL tables, we use encryption to convert passwords (plain text) into an encrypted form (ciphertext). Later, as per requirement, we again convert it back to plain text (password) using decryption.

We can understand the encryption and decryption process quickly using the following screenshot:

We need to install a cryptography module in Python using pip command.

Now, click on add code and paste the following command:

It installs the packages. I have already installed the cryptography package. Therefore, it says – Requirement already satisfied:

Let’s use this package for encryption or the text using the symmetric key.

Fernet is an accessible and most useful secured primitive in the cryptography. It is suitable for small texts and files. We cannot use it for more extensive texts in GB’s. It encrypts or decrypts the texts in the memory.

The following code generates a symmetric key in SQL Notebook and prints it:

It is a URL safe base64 encoded key. Note down this symmetric key and store it in a safe location.

Python scripts to encrypt the password using a symmetric key

In the step, we will use the symmetric key generated in step 1 along with text(password) that we want to encrypt. We use the cipher_suite.encrypt() function for generating a ciphered text from the string:

In the output of the SQL Notebook, it prints the ciphered text, and we can store this password in SQL Server tables. SQL Server does not recognize this encrypted text, so if anyone gets access to the table also and read passwords, he cannot be authenticated by SQL Server:

Suppose we want to decrypt the ciphered text and generate the password from it. We still need access to the same symmetric key for decryption as well.

In the following Python script, we specify the symmetric key (step 1 output) and ciphered text (encrypted password from step 2). We use cryptographic function cipher_suite.decrypt() for decrypting text and generated the original password for use:

As specified earlier, we need the same symmetric key during decryption that we generated in step 1 for encryption. If we try to use some other symmetric keys, it gives the following error message. 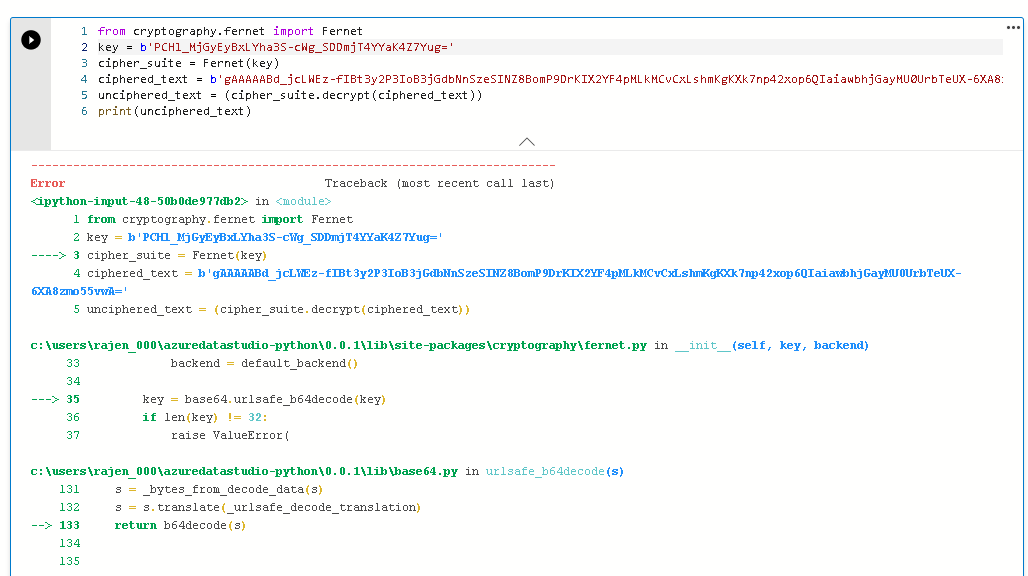 In the previous section, we generated the symmetric key randomly. We did not specify any inputs for generating it. Suppose we want to use a string for the base of this key. It requires the following steps:

Execute the following code in SQL Notebook, and it generates the symmetric key using the specified password and salt with function:

We can use this symmetric key and follow steps 2 and 3 specified above for encrypting and decrypting the passwords.