Disclaimer: I assume dear Reader, that you are more than familiar with the general concept of partitioning and star schema modeling. The intended audience is people who used to be called BI developers in the past (with a good amount of experience), but they have all sorts of different titles nowadays that I can’t keep up with… I won’t provide a full Visual Studio solution that you can download and just run without any changes or configuration, but I will give you code can be used after parameterizing according to your own environment.

So, with that out of the way, let’s start with some nostalgia: who wouldn’t remember all the nice and challenging partitioning exercises for OLAP cubes? 🙂 If you had a huge fact table with hundreds of millions of rows it was at least not an efficient option to do a full process on the measure group every time, but more often it was out of the question.

In this example, I have a fact table with 500M+ rows that is updated hourly and I created monthly partitions. It is a neat solution and the actual processing takes about 3-4 minutes every hour, mostly because some big degenerate dimensions I couldn’t push out of scope. The actual measure group processing is usually 1-2 minutes and mostly involves 1-3 partitions.

I know OLAP is not dead (so it is said) but not really alive either. One thing is for sure: it is not available as PaaS (Platform as a Service) in Azure. So, if you want SSAS in the Cloud, that’s tabular. I assume migration/redesign from on-premise OLAP Cubes to Azure Tabular models is not uncommon. In the case of a huge table with an implemented partitioning solution, that should be ported as well.

Where Visual Studio provided a decent GUI for partitioning in the OLAP world, it’s not the case for tabular. It feels like a beta development environment that has been mostly abandoned because the focus has been shifted to other products (guesses are welcome, I’d say it’s Power BI but I often find the Microsoft roadmap confusing especially with how intensely Azure is extending and gaining an ever growing chunk in Microsoft’s income).

In short: let’s move that dynamic partitioning solution from OLAP into Azure Tabular!

The partitioning solution should accommodate the following requirements:

The process of Dynamic Partitioning 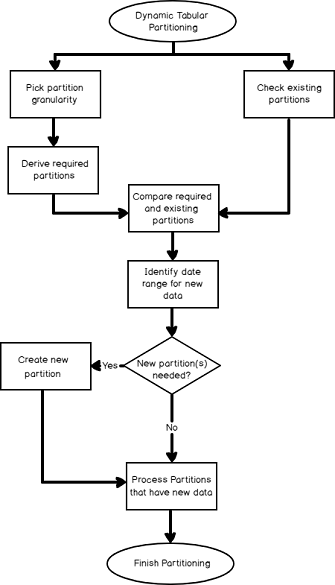 My solution consists of the below components:

Let’s get to it, going through the steps from the diagram one-by-one!

The below objects are used in the solution.

I chose C# for this script’s language and the TOM (Tabular Object Model) objects are required to interact with tabular servers and their objects. To use them some additional references are needed on the server (if you use ADF and SSIS IR in the cloud, these are available according to the Microsoft ADF team) that are part of the SQL Server 2016 Feature Pack. You can find more info about how to install it here:

And the official TOM Microsoft reference documentation can be very handy:

The part that is related specifically to the partitions:

Create Tables, Partitions, and Columns in a Tabular model

The below variables are needed to be passed from the package to the script:

Make sure you include the above variables, so they can be used in the script later on:

The syntax for referencing them (as it’s not that obvious) is documented here:

Using Variables in the Script Task

The script itself does nothing else but loops through all existing partitions and calls a stored procedure row-by-row that inserts the details of that partition into a SQL table.

SQL to sort out what to do with partitions

All this logic is coded into pr_InsertTabularPartitionsRequired (feel free to use a better name if you dislike this one) and in high level it does the following: 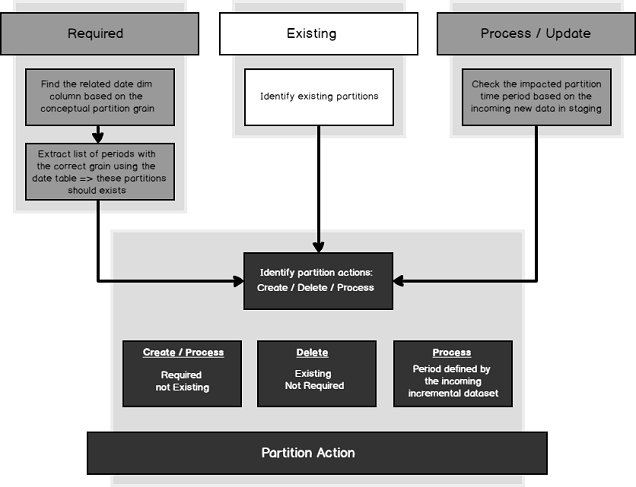 Gray means T-SQL, white is C# (see the previous section), dark grey is putting everything together.

Here is the code of my procedure, it works assuming you have the three tables defined previously and you configured the values according to your databases / tables / columns.

It is mostly self-explanatory, and the inline comments can guide you as well. Some additional comments:

Additionally, a WHERE clause for each partition is defined which can be used later when it is time to actually create them.

Create new partitions / drop the ones not needed / Process

Again, back to the C# realm.

One particular inconsistency caught me as I had to spend half an hour to figure out why removing a partition has a different syntax then processing. It might be totally straightforward with people having a .NET background but different than how T-SQL conceptually work.

How to assign the right query for each partition? Yes, we have the WHERE conditions in the ETL_Tabular_Partitions_Required table but the other part of the query is missing which has the date filtering to ensure there are no overlapping partitions. For that I use a trick (I am sure you can think of other ways, but I found this next one easy to implement and maintain): I have a pattern partition in the solution itself under source control. It has to be in line with the up-to-date view/table definitions otherwise the solution can’t be deployed as the query would be incorrect. I just need to make sure it always stays empty. For that a WHERE condition like 1=2 is sufficient enough (as long as the basic arithmetic laws don’t change). Its naming is “table name – pattern”

Then I look for that partition (see the details in the code at the end of the section), extract its source query, strip off the WHERE condition and then when looping through the new partitions, I just append the WHERE clause from the ETL_Tabular_Partitions_Required table.

Note: I use SQL queries not M ones in my source but here’s the code that helps you get both types from the tabular database’s partition using .NET once you have identified the proper partition that contains the pattern:

Now I have the first half of the SQL query, I have the building blocks for this last step of the partitioning process:

Don’t forget that after the loop the tabular model must be saved and that is when all the previously issued commands are actually executed at the same time:

The code bits that you can customize to use in your own environment:

So, by now you should have an understanding of how partitioning works in tabular Azure Analysis Services and not just how the processing can be automated but the creation / removal of the partitions based on configuration data (instead of just defining all the partitions beforehand until e.g. 2030 for all months).

The scripts – as I said at the beginning – cannot be used just as they are due to the complexity of the Azure environment and that the solution includes more than just a bunch of SQL tables and queries: .NET scripts and Azure Analysis Services.

I aimed to use generic and descriptive variable and column names, but it could easily happen that I missed the explanation of something that became obvious to me during the development of this solution. In that case please feel free to get in touch with me using the comments section or sending an email to mi_technical@vivaldi.net

Istvan Martinka
Istvan is a Hungarian data warehouse guy living in New Zealand for the part 9 years. He studied economics and have a MSc degree. He ended up in the IT world after being thrown into the deep water of Business Intelligence by migrating SSAS OLAP cubes as his IT first project in 2007 (now it could be called the depths of a data lake…).

Since then he has dealt with every component of the Microsoft BI stack (all the S-es) and now he's finding his way into the clouds, without being clouded by its marketed potential and staying realistic.

He has spent 9 years consulting for various clients in many different industries and he still enjoys dealing with the nitty-gritty troubleshooting (such as "Why doesn't this Azure DB connection manager work?"), modelling data warehouse / data marts and anything in between: requirements gathering/analysis, development, implementation, …

The experience he gathered throughout the years helped him becoming a Microsoft Certified Solutions Expert in the field of Business Intelligence.

He currently works for Farmlands, one of the largest agricultural cooperatives in New Zealand, developing and extending their data warehousing solutions.

View all posts by Istvan Martinka