In the article How to partition an SSAS Cube in Analysis Services Multidimensional, we explained how you can partition your measure groups in an SSAS cube. In this article, we’ll look at the expected benefits of the partition strategy. Time to reap the benefits of our hard work.

The first benefit becomes clear after we’ve deployed the cube, during processing: 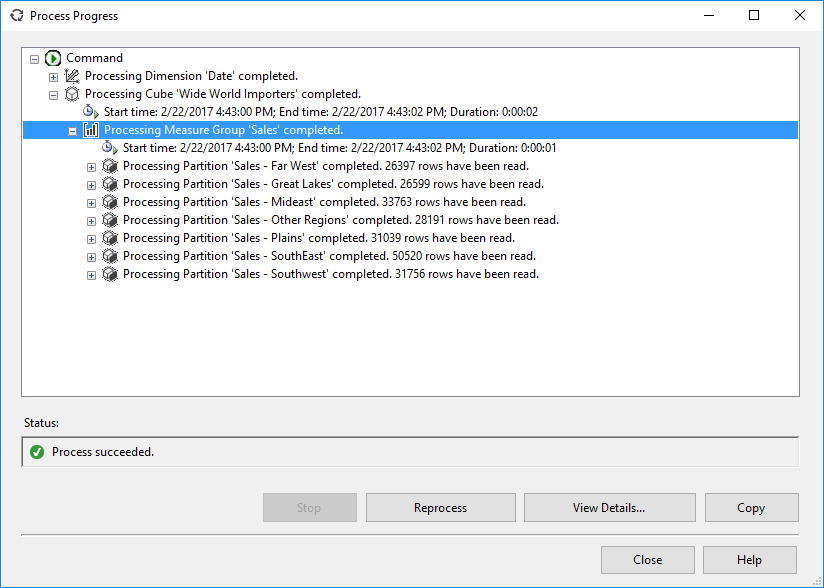 All the partitions can be read and processed in parallel, which maximizes throughput (especially if you saved them on separate disks) and can reduce processing time of your measure group. The amount of processing reduced depends on the number of processors SSAS has available.

There are other benefits related to processing:

One of the most important benefits however is not related to processing time, but to query performance. When you have defined partitioning and your MDX query only select data from a certain partition, all the other partitions won’t be read. This can significantly reduce your query response time. This is called partition elimination. Let’s look at an example.

First, we start up profiler so we can monitor the queries sent to the cube, but also find out which partitions are being read from disk. Create a new trace.

Connect to your SSAS instance. 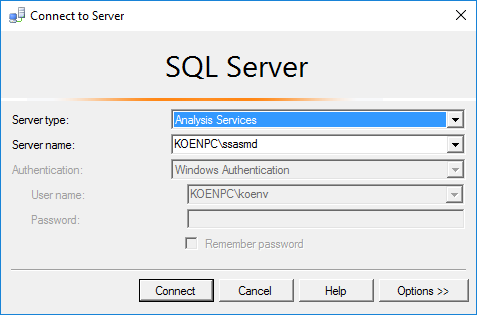 In the Events Selection tab, only keep the events from the sections Progress Reports, Queries Events and Query Subcube selected. 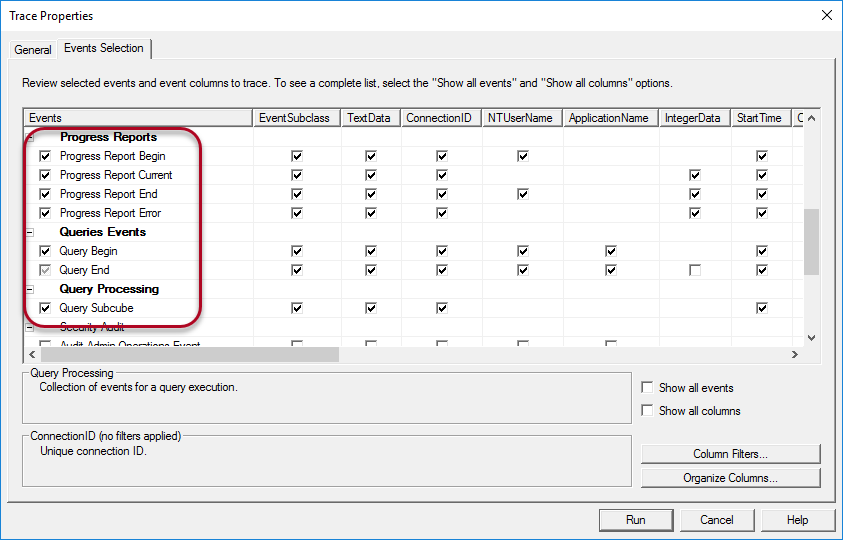 Click Run to start the trace. In Management Studio, we are going to browse the cube to generate some MDX queries. 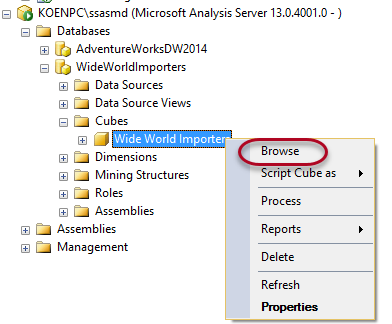 Let’s drag in the Calendar Hierarchy and the Total Excluding Tax measure. 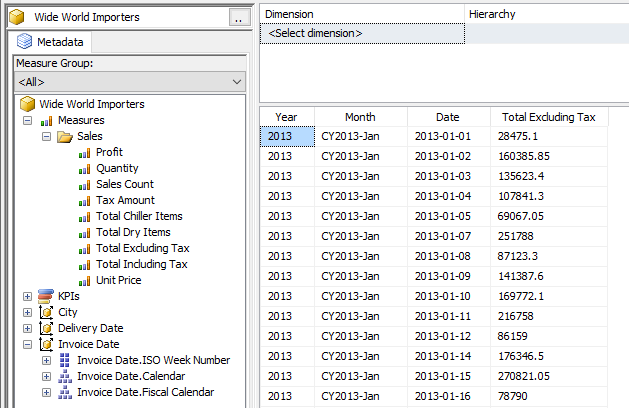 When we take a look at the trace, we can see all the partitions were read:

Even though there’s no partition elimination for this particular query, it can already benefit from the parallel execution on the different partitions.

When we look at the Profiler trace, we can now see only one single partition was read:

If we would have a very large cube with data evenly distributed over all our 7 partitions, the cost of reading data would be 1/7th of the original query!

But how does SSAS know which partitions to eliminate? This is done using the partition slice, a property of the partition. 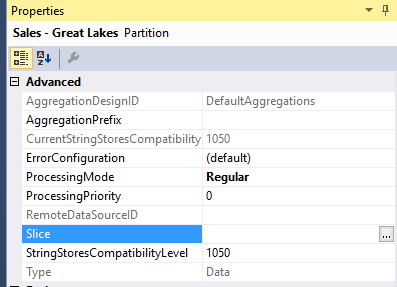 You can set this property manually. For the Far West partition, this would be [City].[Sales Territory].&[Far West]. You can drag and drop the appropriate member to the expression editor: 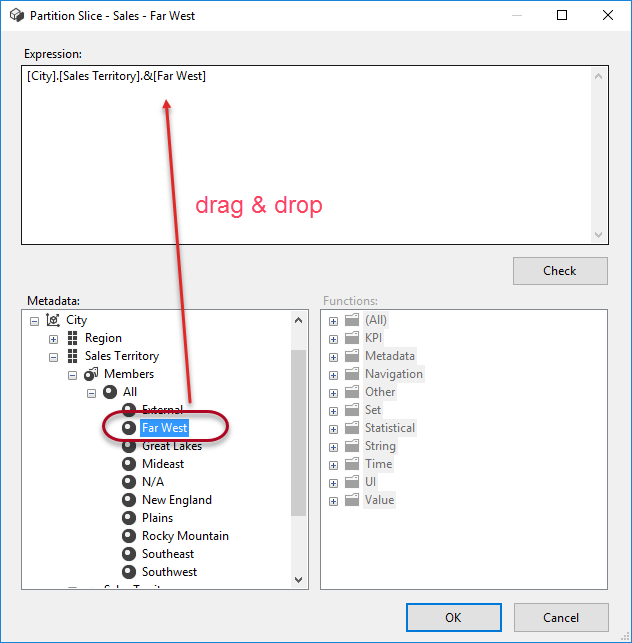 Now SSAS knows the partition only includes data for this particular Sales Territory. For MOLAP storage, SSAS automatically detects which data is loaded into a partition and it will set the slice accordingly (internally, you won’t see a change in the slice property). However, this is not 100% waterproof. For optimal configuration, it’s recommended to set the slices manually.

It might be possible for example that SSAS can’t detect which slice to set for the “Others” partition, since it consists of multiple members. In that case, SSAS might set the slice to a higher level of the hierarchy – the ALL member in this case – instead of using OR to join the members together in one slice. This means the partition might be scanned for queries, while the data wasn’t needed after all.

Let’s illustrate with another example: if you have a slice on Q1 and Q2 of 2016, SSAS might create the slice on the lowest common member: the year. If you query the first quarter, a whole year of data might be read.

For the “Others” partition, we can set the slice using a set expression: 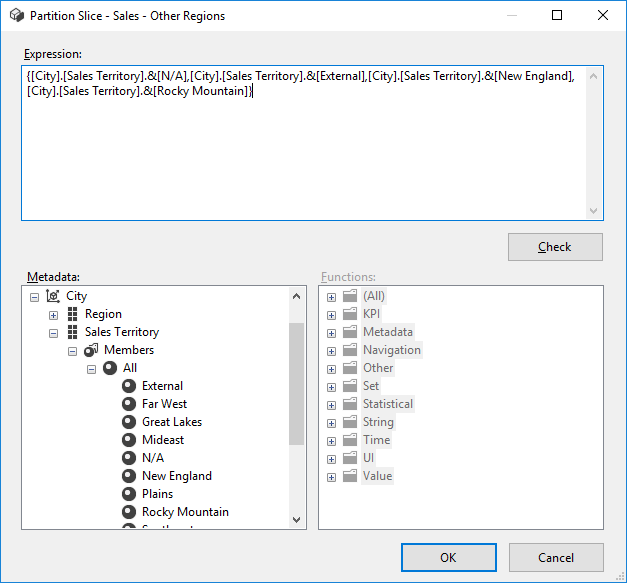 We can verify it works when we set the filter to Rocky Mountain and External:

There are several reasons why partition elimination might not always work as you’d expect. Many-to-many relationships might for example prevent that partitions are eliminated if the partitions are defined on the intermediate dimension. Chris Webb explains this in the blog post Many-to-Many Relationships and Partition Slices.

In reality, we would slice first on Year and then on Month. You can find more information on this type of behavior in the Reference Links section.

There are many clear-cut benefits of partitioning measure groups:

The previous article in this series: