Sometimes, we need to drop a SQL Server Login because we gave an access to a person who left, this login was used by an application that has been decommissioned for example.

To do so, we can use SQL Server Management Studio (SSMS) as follows:

We could also execute a DROP LOGIN statement:

No matter the path you followed, if everything went OK, your login is now dropped. But, as SSMS stated, you may have left a few things inside your databases. If there were mappings between this login and one or more database users (one per database), these users are still there.

We can come to that situation too when we restored one or more databases from a SQL Server instance (source server) to another server (destination server) where all logins mapped to these databases are not created on a destination server, or they are created but with different SID. Anyway, if you came to the situation you expected then it’s ok, but if not, it’s mandatory to carefully consider the advice in that warning that says we need to transfer ownership of schemas to another user.

But there are also cases where these steps will fail. For instance, if the login you want to drop is set as a database owner for one or more databases. It that case, you’ll get following screens in SSMS: 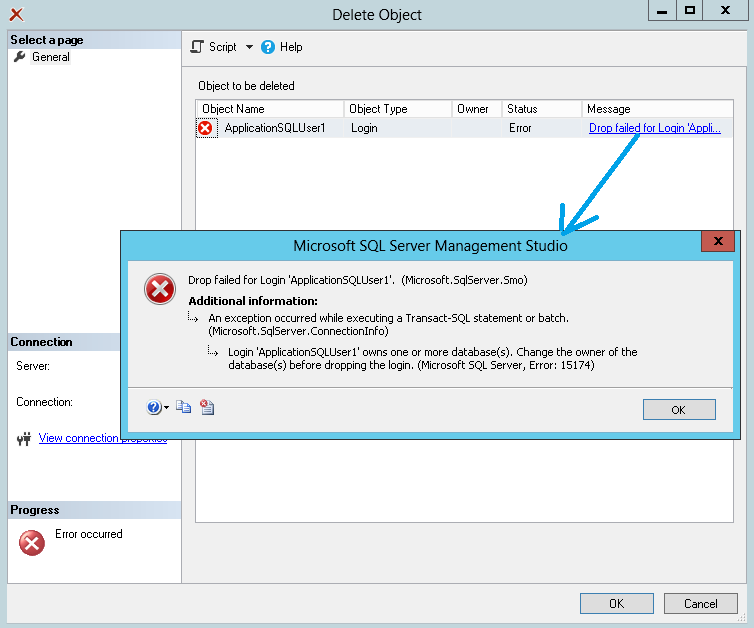 If you used T-SQL, you’ll get following error message:

In this article, we’ll try to drop a SQL Server Login and all its dependencies using T-SQL statements. This test and its conclusions will provide us relevant information that we can use if we are willing to automate this task or at least some parts of it.

In the following sections, we will first define and build a test case. Our objective will be to drop a SQL Server Login [ApplicationSQLUser1] and its corresponding databases users, both called [UserA]. We’ll first start trying to remove [UserA] database user from [Db1] database. Once we managed to perform this task, we’ll review the steps we followed and consider their appropriate sequencing. Once this is done, we’ll consider the removal of the login itself and also enlist the actions that have to be done.

There are some other important facts:

Diagram that depicts the situation

Here is a diagram that represents the situation described in previous subsection. 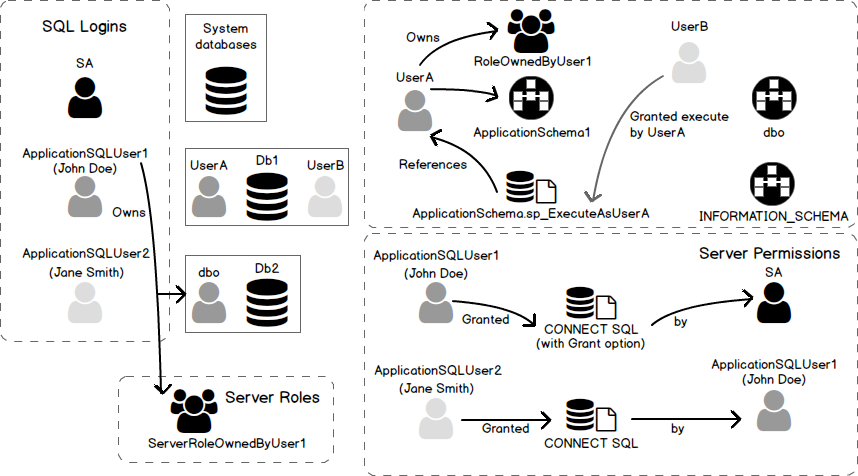 You will find below necessary commands to create this situation in your environment. This code can be found in the script called “DropLogin-DropDbUser.tests.sql” attached to this article.

In this section, we’ll make different tests (based on test case situation) so that we can conclude on what we should do to make a good stored procedure that drops database users.

Let’s try to run following query and check what happens.

Here is our first error message that says we cannot drop this user because it’s the owner of one or more database schemas.

This is not a problem, let’s just run the following statement so that this message will disappear. Note that it’s pretty simple here because we have one schema.

Let’s suppose everything went as expected and retry to drop database user:

Let’s solve this problem by altering authorization to [dbo] database user on role [RoleOwnedByUserA]. This is achieved by running following statement:

Actually, it did not succeed because we have a stored procedure that references this database user…

Here, we could have a problem because we could make an application that works at the moment completely fail. So, it’s recommended to test code modifications!

Here, we are sure of what we are doing, so we’ll modify the stored procedure so that it will execute as [dbo] database user.

Let’s try again to drop [UserA] database user. This time, it should succeed…

Let’s try one more thing and create once again our [UserA] database user. Let’s set this user as a member of a built-in database role, for instance [db_ddladmin]. To do so, we can run following T-SQL script:

Now, let’s try to drop [UserA] and check if it ends successfully…

Here is the complete script of the actions performed above.

First, we have to store permissions our database user granted to other users in a temporary table. We can do this with the following query already shown above.

Why would we do that? Because an ALTER AUTHORIZATION statement on a schema will remove all permissions granted on the objects of that schema. This is expected behavior of that statement as we can see on Microsoft’s documentation page :

So, once we ran the ALTER AUTHORIZATION statement, we have to reassign these permissions.

Then, we should also consider role ownerships and we will have to reassign them to a user. Again, this is done by ALTER AUTHORIZATION and we should take care of what we do here, but if we already saved database permissions, then we have everything we need to set the permissions on roles back to what they were. To demonstrate this, let’s run following statement that will grant a permission on [RoleOwnedByUserA] database role:

Finally, we had to review existing code so that we can’t find any reference to [UserA] in the body of procedural objects (stored procedures, functions, etc).

However, there is one more thing we can conclude. It’s that there is an order to respect if we want to automate the removal of a database user U:

Dropping all database users mapped to a login

In our test situation, there were two database mappings defined for [ApplicationSQLUser1] login. We already managed to drop the most difficult one, [UserA] in [Db1] database. As we need to remove any reference in any mapped database, it’s time to consider the second one.

Actually, this mapping is done to [dbo] database user, which is a reserved user that we can’t drop. It’s a consequence of the fact that [ApplicationSQLUser1] login owns. We’ll review this in a moment and it won’t be a problem anymore.

However, if we were in front of another user than [dbo], we should follow the exact same path as we did for [UserA] user in [Db1] database.

Unfortunately, this statement will fail with following error:

This means that we should take a copy of permissions granted by this login and revoke them and grant them again as another SQL Server login like [sa]. We can list existing server permissions using the following query:

In this test case, we will get following results:

We can solve this by granting the CONNECT SQL permission as [sa] as follows:

If we run again the query to get back server level permissions, we’ll get an empty result set:

Now, we are ready for another trial to remove [ApplicationSQLUser1] login…

Here, we get another error message stating that we need to review server role ownerships:

You won’t get this error message on a SQL Server 2008 R2 or lower version of SQL Server as, in these versions, we can’t create a custom server role.

We need to get the list of server roles owned by [ApplicationSQLUser1] login. There is the query that will help us for that:

And here is the result set for this query:

We need to, once more, use ALTER AUTHORIZATION statement to get rid of this error message:

Now, let’s try once again to drop our [ApplicationSQLUser1] login…

To get rid of this error, we need to list out databases which owner is [ApplicationSQLUser1] login. We’ll do this using following statement:

Results for that query will show us that [Db2] database is owned by this login.

We can change database owner to [sa] using following statement:

Pay close attention to this statement because it actually remaps [dbo] database user to the server login provided after reserved word « TO », which is [sa] in our case.

Once we’ve run the previous statement, we will be able to finally drop the login!

Here are the operations we performed in last subsection.

As we’ve seen for database users, dropping a SQL Server Login is not always a simple task. There are multiple operations to do.

Let’s sum them up:

Now we finished our tests, we can cleanup what we’ve created. We can run following script to do that:

As we’ve seen along this article, it’s not that simple to correctly drop a SQL Server login. There are many steps to follow and some of these are not that simple: we might have to review procedural code and permissions in order to just do what we want to d

Nevertheless, we identified the actions to take for login and database user removal and we could conclude that these actions could be (partially) scripted or put in one or more stored procedure.