Let’s say we have a database role that we don’t need anymore because we defined another security policy using another database role. What are the steps to follow in order to properly drop this database role? That’s the question this article will try to answer, covering as many cases as possible.

In the following article, we will consider the simple steps we can follow in order to do this task using both SSMS and T-SQL. Then, we will focus on some facts that will lead us to the conclusion that, if we do it this way, it won’t work every time. We will list some situations where it could fail and define a test case situation in order to create a stored procedure that will do the job correctly, in all cases bymanaging these situations.

In this section, we will see how to drop a Database Role that does not have any members or any permissions assigned. Furthermore, it does not own any database object (schema, etc.).

How to drop a Database Role using SSMS?

How to drop a Database Role using T-SQL

To sum up, in real life, it’s not always just a matter of firing a DROP ROLE command. We can readily confirm that because even SSMS does not simply run this command when we use it!

In fact, if we generate the T-SQL statement that will drop the [ToBeDropped] database role, we may be surprised of the results.

To generate this statement, right click on the role to be dropped, then go over “Script Database Role as” then “Drop To” and select a destination for the generated script.

Here is the script that is generated using SSMS v17.1: 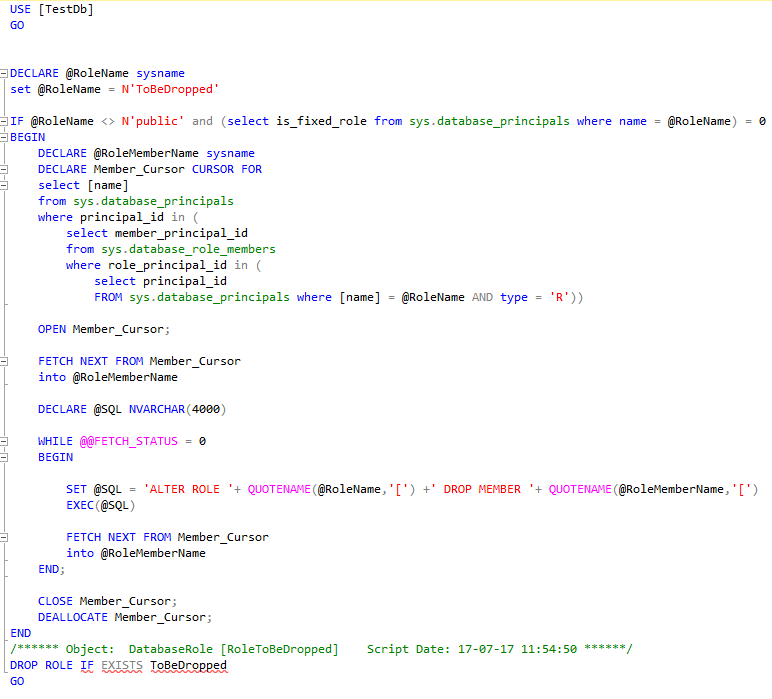 There are several noticeable facts that we can notice from this generated script:

We can conclude that SSMS developers did think of database role removal as a complex task. But what if we want to drop a role that owns a database schema?

Actually, it won’t work and we’ll get following error message:

So, there is more work to do and we’ll try to cover more cases that SSMS does by creating a new stored procedure that will manage the removal of a Database Role.

Actually, there other cases where a DROP ROLE statement will fail and some of them were covered for Database User removal in an article entitled “How to drop a SQL Server Login and all its dependencies“. The case includes:

In that article, we also concluded that we had to check for programmable database objects (procedure, function…) using the database user as execution context. We will ignore this case in our tests because, in SQL Server 2012 (and maybe in higher versions), a database role cannot be impersonated. To be convinced, we could give a try and run following statement that creates a stored procedure which should be executed as db_owner built-in database role.

In following, we’ll define a test case and scripts to build this test case like we did in the article mentioned above “How to drop a SQL Server Login and all its dependencies“. Then we’ll define a general stored procedure called DropDatabasePrincipal that will work for both Database Users and Database Roles (except we’ll focus on Database Roles for the purpose of this article).

In this section, we will present the test case situation to which we will refer in the remaining of this article and where we want to drop a database role called RoleToBeDropped.

We are in a database called [TestDb].

Diagram that depicts the situation

Here is a diagram that represents the situation described in previous subsection. 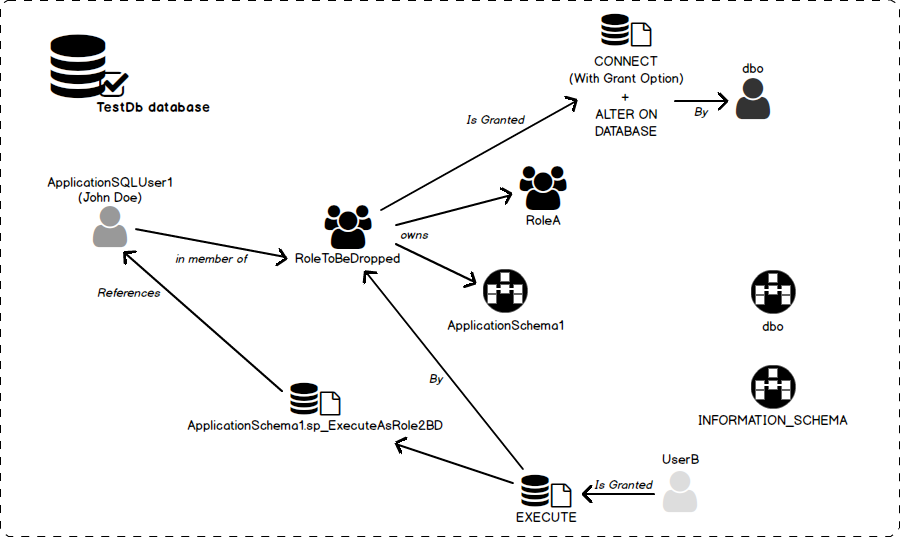 You will find below, the necessary commands to create this situation in your environment. You can run the script multiple times it will work every time. This script can also be downloaded at the end of this article.

Design of the interface

As there are common actions to perform in order to remove both database users and database roles, we will define a stored procedure that will handle both of them. We will call this procedure [DropDatabasePrincipal] and store it a database schema called [Administration].

Which parameters do we need for that procedure to do the task we want?

First, it needs a parameter to tell it which database is used. Let’s say @DatabaseName. By default, if no value is provided, the stored procedure will use the results of DB_NAME() built-in function.

Then, we also need to provide the name of the database principal that we want to delete. We will simply call this parameter @PrincipalName.

As we will have to check for permission assigned by the database principal, we could also add a conditional parameter that tells the procedure whether to reassign these permissions or not. We will call this parameter @PreserveAssignedPermissions. It would be of BIT data type with a default value of 1 as we don’t want to break what will remain.

If we want to keep assigned permissions, this means we need to reassign them using another database principal. You will find in “Appendix A – Assigning database permissions” some considerations that lead to the conclusion that we won’t define a @NewPermissionAssigner parameter and will simply use the default context.

In the same logic, we could want to reassign permissions this role provides to its members directly to them. Whether we do this or not would be defined by another parameter we would call @AssignRolePermissionsToItsMembers of BIT data type with a default value of 0. Again, we’ll use the default behavior of SQL Server to reassign these permissions when this parameter is set to 1.

Furthermore, we could tell the stored procedure whether to reassign database object ownership or not and if so, which database principal has to be used. For that purpose, we will define two additional parameters:

Finally, there are general parameters:

Everything put together, this leads us to following interface for our stored procedure:

Here are the steps which should be in the stored procedure:

Getting back permissions assigned by a database principal

In order to get back permissions assigned by a principal name, we will create a temporary table called #AssignedPermissions and insert rows returned by a modified version of following query:

Here, we won’t cover every possible type of database object, but those presented in the test case i.e. database schemas and database roles. We will keep that information in a temporary table called #OwnedDbObjects which has following structure:

In order to get back database schemas, we’ll simply query sys.schemas table with a value for its principal_id column corresponding to the identifier for the database principal we want to drop.

Here is the query we’ll use:

This can be performed using following query:

We’ll just store this information in the same table as the above subsection, i.e. #OwnedDbObject with ‘MEMBERSHIP’ as the value for ObjectType column.

In order to list out database roles which has a database principal as a member, we’ll query sys.database_role_members system table where its column called member_principal_id has a value corresponding to the identifier for the database principal we want to drop.

Hence, we will use an adaptation of following query:

We’ll just take a modified version of the query generated by SSMS for that part. This query will look in following system tables:

You will find the script for creating the stored procedure in the Download section of this article.

You will find, attached at the end of the script, a series of tests that have been performed in order to check that a database role has been dropped as expected.

The first test consists of running the stored procedure with @AlterDbObjectsOwnership set to 0, meaning that it won’t set new owner for RoleA and ApplicationSchema1 database objects. This test should fail.

Here is the corresponding procedure call:

Next test consists in setting @PreserveAssignedPermissions parameter to 0 and @AlterDbObjectsOwnership back to its default value (1). This test should fail too as permissions are assigned and we don’t want to break everything just to drop a single database principal.

The T-SQL script to run this test is built around following code:

Another test will consist in setting the value of @PreserveAssignedPermissions parameter back to its default value (1) and running the stored procedure. This should actually work but, in cases where the database principal is a role, the permissions assigned to this role has not been transmitted to its members (before the execution of the stored procedure). This test is performed running following procedure call:

There is a last but not least test to perform where we want to transmit permissions from role to its former members, which we achieved with @AssignRolePermissionsToItsMembers parameter set to 1. Like the test just above, it should be successful.

In the article entitled “How to drop a SQL Server Login and all its dependencies“, we already made a few tests and we know that SQL Server resets permissions on an object when ALTER AUTHORIZATION instruction is used. Here are some additional considerations that has to be taken in order to build the part of the DropDatabasePrincipal stored procedure that sets back permissions to the other database principals that should remain after it did its work.

First, let’s say [ApplicationSchema1] database schema is owned by [UserB] and we want to assign EXECUTE permission on a stored procedure in that schema to a role called [RoleA] as [dbo] database user. We would do this using following query:

Unfortunately, this statement will fail with following error message:

This is due to the fact that [dbo] users, even if it’s in db_owner database role does not have sufficient permissions to run this statement. In fact, in order to do this, we should first grant [dbo] the permission to execute the stored procedure and to share this permission:

But, this will also fail!

By the way, if there were a UserC database user that has the EXECUTE permission with GRANT OPTION on that object, following statement would work:

We can check permissions to RoleA and we’ll get:

At second, let’s notice that, by default, if we grant permissions on an object in a database schema, the database principal used to grant this permission is actually the one that owns the schema.

This means that we should operate as follows in order to set back permissions after a reassignment of schema ownership: