This article gives an overview of the SQL Server ISNUMERIC built-in system function. It explains how to use this function, illustrates its limitations, and provides some alternatives.

What is the SQL Server ISNUMERIC function?

Since not only exact numbers are considered valid numeric data types, the ISNUMERIC function will return 1 even if the expression contains some symbols and alphabets.

In the official documentation, it is mentioned that “ISNUMERIC returns 1 for some characters that are not numbers, such as plus (+), minus (-), and valid currency symbols such as the dollar sign ($).”

To list all acceptable characters, we used the following SQL Command:

This SQL Command generates numbers ranging from 0 to 255 (ASCII characters codes) and uses the CHAR() function to retrieve the corresponding character for each ASCII code. Then we use the SQL Server ISNUMERIC function to check whether this value is considered as a valid numeric data type or not. The following table contains the SQL Command result: 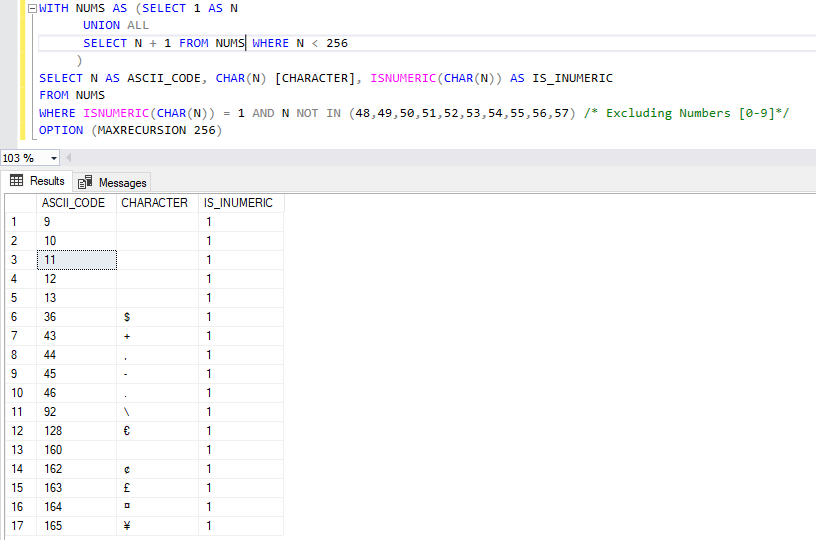 The result table shows that the SQL Server ISNUMERIC function accepts currency symbols and signs (plus and minus). Since SQL Server didn’t show all characters (ASCII CODE: 9,10,11,12,13,160), we referred to the ASCII code table to find them:

As shown in the table above, the SQL Server ISNUMERIC function ignores all kinds of whitespaces when evaluating the input expression.

In the previous section, we listed the single characters that are considered valid numeric types. Moreover, there are other acceptable characters if used in the middle of a numeric value, such as the “e” character used in the scientific notation, as an example 12e2252. To list those characters, we modified the previous SQL Command to put all characters within a numeric string and evaluate the whole expression using the ISNUMERIC function.

As shown in the table above, the dot and comma characters are supported since they are used in decimal and monetary values. Besides, as mentioned above, the “E” and “e” characters are used in scientific notations. I searched for official documentation mentioning the “D” and “d” characters with no success. I found a Stack Overflow answer mentioning the following note from the VB6 documentation, which explains why: “Floating-point values can be expressed as mmmEeee or mmmDeee, in which mmm is the mantissa and eee is the exponent (a power of 10). The highest positive value of a Single data type is 3.402823E+38, or 3.4 times 10 to the 38th power; the highest positive value of a Double data type is 1.79769313486232D+308, or about 1.8 times 10 to the 308th power. Using D to separate the mantissa and exponent in a numeric literal causes the value to be treated as a Double data type. Likewise, using E in the same fashion treats the value as a Single data type.”

There are two limitations for the SQL Server ISNUMERIC function:

There are some alternatives for the ISNUMERIC function to solve the second limitation we mentioned previously:

You can simply use a case statement to check if an expression/column contains any characters other than numbers as follows:

The image below shows how this command will return 0 for a numeric expression that contains the character “D” while ISNUMERIC() returns 1.

Another alternative is to use the TRY_CONVERT, TRY_CAST, or TRY_PARSE functions to check if an expression can be converted to a specific data type. Those functions will return the converted value if it can be evaluated as the specified data type; otherwise, they will return NULL. As an example:

The following image shows the difference between using the TRY_CAST function and the ISNUMERIC function:

In this article, we explained the SQL Server ISNUMERIC built-in scalar function briefly. Then, we illustrated the acceptable non-numeric characters using this function. Finally, we mentioned some of the limitations and alternatives.