XML (eXtensible Markup Language) is one of the most common formats used to share information between different platforms. Owing to its simplicity and readability, it has become the de-facto standard for data sharing. In addition, XML is easily extendable.

Let’s first generate some dummy data. We will use this data to create XML documents. Execute the following script:

In the script above, we created a Showroom database with one table Car. The Car table has five attributes: CarId, Name, Make, Model, Price, and Type. Next, we added 12 dummy records in the Car table.

Converting into XML from SQL tables

The simplest way to convert data from SQL tables into XML format is to use the FOR XML AUTO and FOR XML PATH clauses.

FOR XML AUTO in SQL SERVER

The FOR XML AUTO clause converts each column in the SQL table into an attribute in the corresponding XML document.

In the console output you will see the following:

Click on the link and you will see the following document in a new query window of SQL Server management studio:

FOR XML PATH in SQL SERVER

A snapshot of the output is as follows:

In the output, you will see a total of 12 elements (the screenshot shows only the first 4). You can see that each column name has been converted to an element. However, there is one problem; by default, the parent element name is “row”. We can change that using the following query:

In the output, you can see Car as the parent element for each sub-element. However, the document is not well-formed as there is no root element in the document. To add a root element, we need to execute the following script:

In the output, you should see “Cars” as the root element as shown below:

Now suppose you want that CarId should be the attribute of the Car element rather than an element. You can do so with the following script:

You can see now that CarId has become an attribute of the Car element.

We can add further nesting levels to an XML document. For instance, if we want Name, Make and Model elements to be nested inside another element CarInfo we can do so with the following script:

In the output, you will see a new element CarInfo that encloses the Name, Make and Model elements as shown below:

Finally, if you want to convert the elements Name and Make into an attribute of element CarInfo, you can do so with the following script: 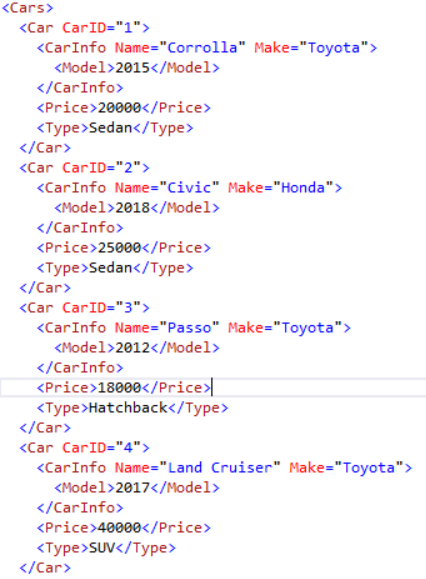 Save the above XML document with the name Cars.xml. In the next section, we will load this XML script into the SQL Server and will see how to create a table from the XML Document.

Creating a SQL table from an XML document

Let’s first see how we can create an SQL table using attributes. Suppose we want to create a table with two columns that contain the values from the Name and Make attributes from the CarInfo element. We can do so using the following script:

In the script above we declare an XML type variable @cars. The variable stores the result returned by the OPENROWSET function which retrieves XML data in binary format. Next using the SELECT @Cars statement we print the contents of the XML file. At this point in time, the XML document is loaded into the memory.

As a final step, we execute the sp_xml_removedocument stored procedure to remove the XML document from the memory. In the output you will see values from the Name and Make attributes of the CarInfo element as shown below: 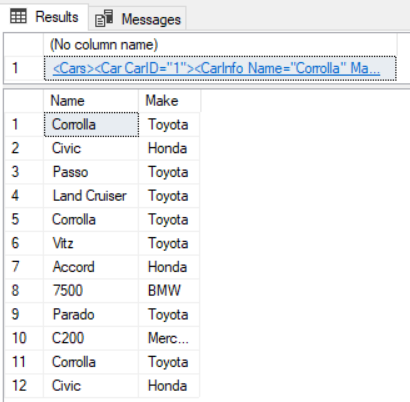 Suppose we want to retrieve the values for the nested CarInfo, Price and Type elements of the parent Car element, we can use the following script: 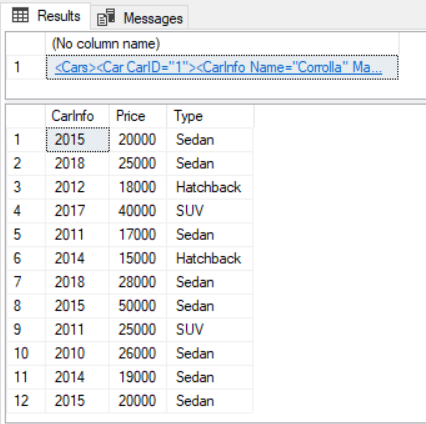 XML is one of the most popular data formats for information exchange. In this article, we saw how we can create a document using XML from a SQL table. We also saw how to import into a table in SQL from an XML document.