To SQL Server DBAs who are the shepherds of data in organizations, key GDPR questions, in general, center around whether data will need to be treated differently, safeguarded more etc. and specifically, as it relates to allowing production data to be used in testing.

That will be the focus of this article as we’ll work our way through the details of this regulation as well as various authoritative articles on the subject, to address this key question. Then we’ll look to ways and means to potentially ameliorate our findings to provide alternatives and workarounds if possible.

Can I use raw production data in testing and be compliant with GDPR?

In terms of personal data e.g. names, addresses, phone numbers etc, the short answer is “no” and we’ll go through the reasons why not.

“Data can only be processed if there is at least one lawful basis to do so. The lawful bases for processing data are:

For our purposes, item #6 is the only one that is relevant as none of the other items, by their nature, would allow for the use of production data, whether personal or sensitive, to be used for testing purposes.

So far we haven’t determined, with authority, that we can’t use raw production data for testing, but our window for allowing this has considerably narrowed, and we must demonstrate “legitimate interests” to proceed (see next).

Initially, this seems promising e.g. “Hey, testing is certainly a legitimate interest” but there are already some hints of trouble.

Although testing certainly isn’t a nefarious activity, by any sense, the qualification is already limited by the “interests or fundamental rights and freedoms of the data subject”.

Although this recital refers to marketing, not testing, it is analogous. Would you expect that your data would be viewed, manipulated, tested or otherwise “processed” for the purposes of software development and quality control? Unlikely. Also, as there is no recital that explicitly (or implicitly) allows for data testing, we can’t rely on that.

So basically, unless the subjects of the data would have a reasonable expectation that their data would be used for such purposes, they can’t be considered “legitimate” in the context of GDPR and therefore would not be allowed under GDPR.

For the purposes of using raw production data in testing, this is essentially the end of the road. But if there was an ambiguity, or remaining questions, those should be put to rest by additional considerations that makes processing production data for testing, even a worse idea, in the context of GDPR, namely processing purpose and the right to object.

“Personal data shall be obtained only for one or more specified and lawful purposes, and shall not be further processed in any manner incompatible with that purpose or those purposes.”

So unless the original purpose of the data collection was for testing purposes, then using it in such a manner would seem to violate both the spirit and letter of the act, and its subsequent incarnation, GDPR, as well.

Furthermore, GDPR provides for the right to object, so even if your organization used personal data without consent, for the reasons of “legitimate interests”, you would still have an obligation to inform the data subjects of the new instance of processing, and allow them to explicitly opt out of this. This would obviously be impractical for the purposes of software/database testing.

So regardless of the safeguards and protections applied to the data, production data can’t be processed for ulterior purposes from when it was originally obtained, without explicit permission from the data subject, an unrealistic scenario.

Ok, I can’t use raw production data, but what if I obfuscate aka pseudonymise it?

We’ve determined how re-processing raw production data for an ulterior purpose, in this case, for database testing, is a non-starter in the context of GDPR, but can anything be done to mitigate the requirement and/or provide some workarounds?

GDPR explicitly encourages and recommends the obfuscation of data. In the context of GDPR, obfuscation is a basic requirement for re-processing data. Obfuscation doesn’t, necessarily, get you out from the stipulations of GDPR but it does relax some of the compliance and auditing requirements.

As to the question above, short answer is “yes” but with the qualification that such pseudonymised data, in turn, falls under GDPR, is considered “personal” data and must still be audited, secured etc. In some cases, the cost of GDPR compliance might preclude the use of production data for test, even though it would be allowable

“Pseudonymization is a procedure by which the most identifying fields within a data record are replaced by one or more artificial identifiers, or pseudonyms.” 2

The basic goal of pseudonymization, is to break up interrelated data or reduce its “linkability” so that it can’t be attributed back to the original data subject. So, if a name, social security number and address were required to uniquely identify and individual, then if two of the three items were pseudonymised then there would be no way to definitively identify the data subject.

Pseudonymised data is reversible, which means it is still considered personal data from the perspective of GDPR and must is held to the same rigorous compliance standards of non pseudonymised data.

Examples of pseudonymization might be converting the data based on a particular algorithm or process that is reversible or replacing data, but storing the replaced data in way that allows it to be achieved. Another example is encrypting the data, but allowing for decryption to its original state.

The advantages of pseudonymization are that

The disadvantage of pseudonymization is that since it is reversible, it is still considered personal data, and falls under the same stringent data protection, auditing and compliance requirements as non-obfuscated data, which can be time consuming and expensive to implement, and expose additional teams, like QA, to liability.

Can I use production data for testing without having to worry about GDPR at all?

Yes, the data can be used if it is anonymized.

An example of anonymization, would be to encrypt the data and then delete the encryption key so that the data could never be decrypted again.

The advantage of anonymization is that GDPR compliance requirements no longer apply to it.

The disadvantage of anonymization is that it can be costlier and labor intensive to apply, since all of the data must be processed and with methods that are sophisticated enough that they can’t be reversed.

The challenge with this solution is that the cost and expense of anonymizing all of your production data, needs to be weighed against the costs and expenses of just complying with GDPR and using lessor forms of obfuscation.

What are the common solutions for obfuscation?

Masking is the primary means for data obfuscation. It is the process of scrambling, blurring, replacing existing data with data of approximate length and format.

Encryption, can be thought of as just another obfuscation technique, but it generally protects data to a much higher degree and is irreversible without a particular “key”. Note that for encrypted data to be considered anonymized, it must be totally irreversible, so the key must be destroyed or otherwise be made inaccessible.

Are there any alternatives to obfuscating production data?

Synthetic data could be used as a means to implement both pseudonymization and anonymization.

Creating test data would be equivalent, in time and expense, to masking production data.

If only some parts of personal production data were replaced with synthetic generated test data, to achieve pseudonymization, then you would be able to use it as test data, but not without adhering to GDPR compliance requirements.

If all personal data were replaced with synthetic generated test data, or an entirely new set of data was generated from scratch, you will have achieved the benefits of full anonymization and could escape the rigors of GDPR compliance entirely.

This illustration shows the four source/types of data in the context of GDPR and obfuscation.

Pseudonymised production data is partially obfuscated, using either masking or encryption. Although such data can be used in testing, GDPR compliance is still required.

Anonymized production data is fully obfuscated either by irreversible masking or encryption. GDPR compliance is not required.

Automatically generated, synthetic test data, can be used to partially or fully obfuscated personal data, but in most cases, such data would be fully obfuscated. In this case, GDPR compliance is not required. 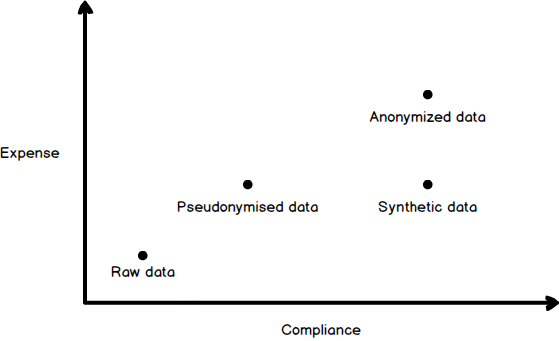 The above schematic shows the relative costs and compliance level to the four types of data used in testing.

Using raw personal data in production, was never a good idea, but GDPR essentially makes it illegal, for affected countries because such data can’t be re-processed, without explicit opt in.

But GDPR does allow for obfuscated data to be re-processed, even for purposes it was never originally intended or gathered for.

Although pseudonymization of data allows it to be re-processed, and does ameliorate some of the requirements of GDPR, it doesn’t change the classification of the data, so it must continue to be considered personal data and treated like that, in the context of GDPR, including auditing and security.

Anonymization of data, entirely frees you of the requirement to comply with GDPR in managing the obfuscated data.

View all posts by Brian Lockwood