In this article, I will cover some of the new features for database developers in these main points:

When we open up SQL Server Management Studio, one of the first changes we notice for SQL Server 2012 is the addition of a new type of table called a File Table.

File table allows us to make a connection between windows share and a database table such that any file that appears in the share will become a row item in the table.

It allows us to run queries that tell us how many files we have in that shared location, what type of files, what size the files are, etc….

Setting this up is a multiple step process:

We will do that with the configuration manager tool, open properties of the instance we are interested in, and there is a tab for file stream, in there we should click on all of the checkboxes(enabling all features) as below 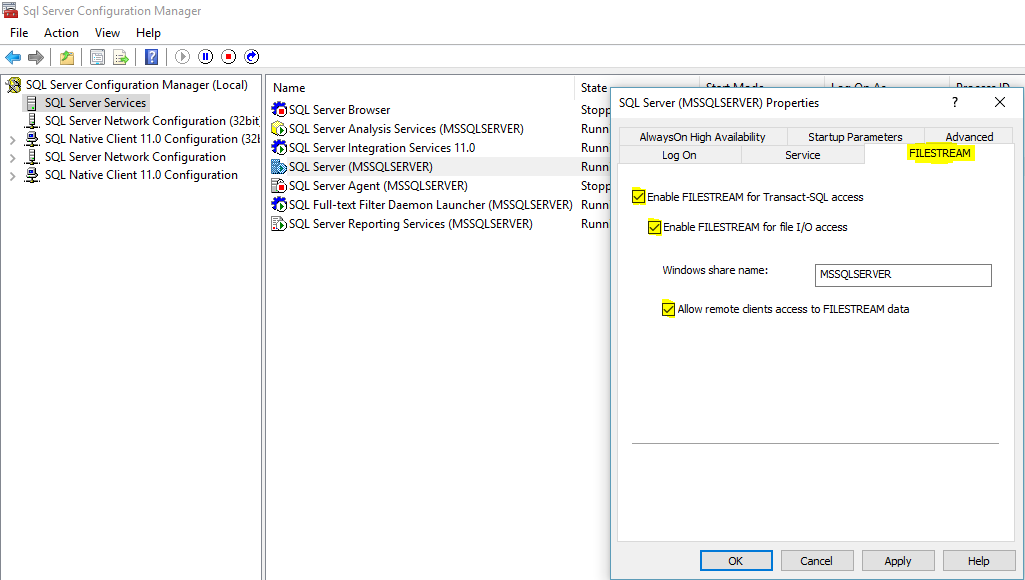 This new feature has been built in the existing feature “FULL – TEXT – SEARCH” but gives us more capabilities like extracting keyphrases and identifying similar documents.

To get these capabilities, we need to perform some effort as the following:

By that, we can create a full-text index as we used to do in the previous versions of SQL but with the new feature STATISTICAL_SEMANTICS like this example here:

and we can use the three function supported with that new feature:

In this section, I’d like to talk about creating a query that returns data in small chunks.

This operation commonly is done in many applications and could sometimes require running some complex codes of the application.

Now in SQL Server 2012, we have an additional tool where we can simply modify a database query that it will handle just retrieving part of the results, commonly known as paging.

So if we have a query like the following one, for example, is retrieving 25000 rows of data:

We didn’t want to view that much of data at the same time so we can view them ten records by ten records adding our new paging tool to the same query:

The previous query will retrieve the first ten records as shown in figure 2, then by changing the number following “offset” part to 10, we will get the next ten records and so on. 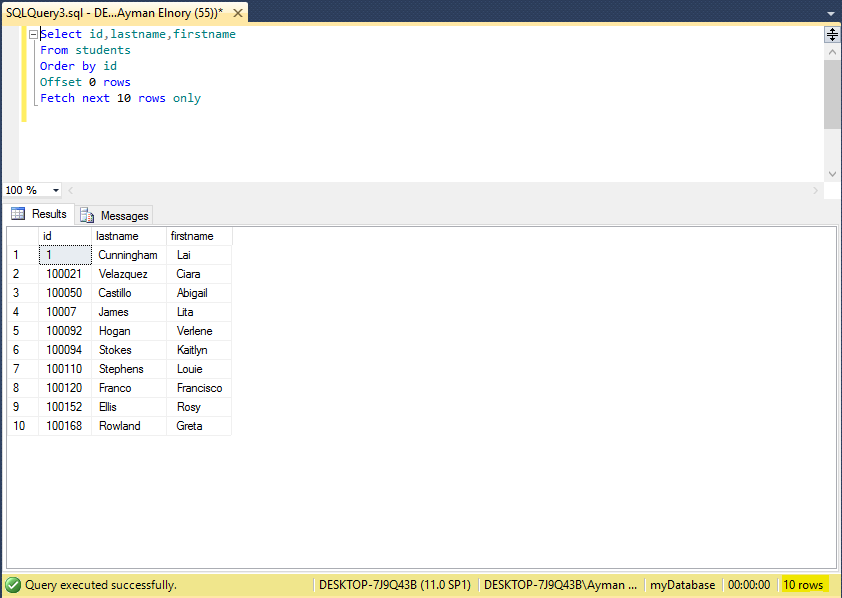 So by using this (offset-fetch) new feature, we can implement paging on the database side rather than having to do all of our paging in the application.

Error handling means the way that we can detect and resolve any error could be in our code. First of all, let us look at the way it was previously handle:

This code will retrieve an error message saying “Divide by zero error encountered.” And here is the new way it can be handled:

simply by that “THROW,” we will get the same error message.

and here are some reasons to stop using “RAISERROR” and start using “THROW”:

It is not a big change, all your error handling mindset and philosophy doesn’t have to change dramatically it is not more of a small syntactic change.

But I encourage you to start using “THROW” and stop using “RAISERROR.”

We can run our code in debug mode to monitor the execution of it.

There are new changes to some windows of this mode that increase productivity and administration of the code debugging:

Changes to the Scope of Objects:

As a conclusion of this article, no doubt that keeping track of newly released features of the technologies we use is very important so we can gain more productivity introduced, get more controls provided, and get more easy ways to handle our work. I hope this article has been informative for you.

Currently, he is working as a Senior consultant production DBA and Development DBA in many projects in multiple government sectors. He is a Top SQL Server blogger in the Middle East, founder of the community mostafaelmasry.com, and is the second Arabic author on Microsoft MSDN in SQL Server.

Based on his current position, he solved fairly interesting problems on fairly large databases and highly sensitive performance cases.

View all posts by Mustafa EL-Masry