In this article, we will explore the STRING_AGG function in SQL and we will also reinforce our learning with various examples. STRING_AGG function can be counted as a new member of the SQL aggregation functions and it was announced in SQL Server 2017. STRING_AGG function gathers all expression from rows and then puts it together in these rows expression in order to obtain a string. Additionally, this function takes a separator parameter that allows separating the expressions to be concatenated.

Firstly, we will start a pretty simple example of STRING_AGG function and then we will examine the syntax and other details about this function. We will create a sample table and populate it with some synthetic data so that we can use this table whole examples of the article. The following script will help to generate a sample table called PersonTestTable:

In this first example, the STRING_AGG function will take all rows expression from the FirstName column of the PersonTestTable table and then generate a concatenated string with these rows expression. At the same time, the concatenated expressions will be separated with the hyphen (–) sign: 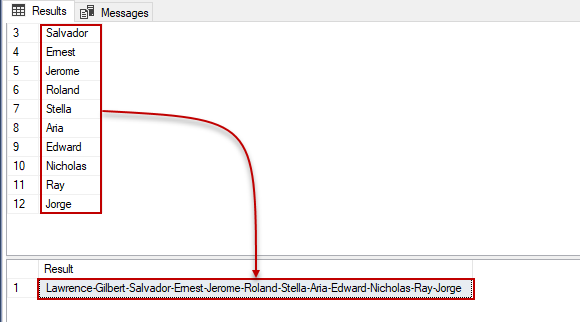 Syntax of STRING_AGG function in SQL

The syntax of the STRING_AGG function looks like below: 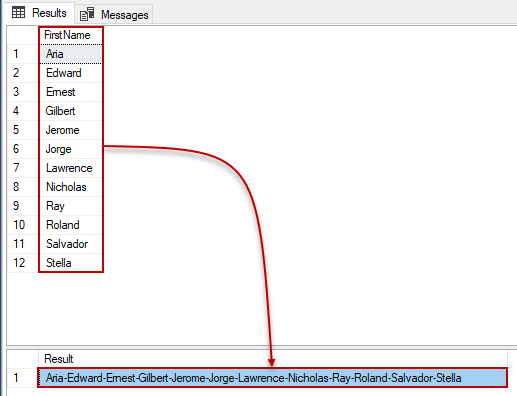 As we can see clearly the STRING_AGG function sorted the concatenated expressions in the ascending order according to row values of the FirstName column. We need to underline one point about this type of usages. The GROUP BY clause will be necessary if the STRING_AGG result is not a sole column in the result set of the query. In the next section, we will learn this concept.

How to group concatenated expressions with STRING_AGG

GROUP BY clause provides grouping the rows that have the same values in SQL Server. In the following example, we will generate grouped and concatenated e-mail addresses by the Country column:

As we can see, the NULL value did not affect the result of the function.

The old method that can be used instead of STRING_AGG function

If we are using an older version than SQL Server 2017, we can use FOR XML PATH and STUFF statements combinations in the query to concatenate rows expressions. However, this method is more complicated than STRING_AGG function but it can be useful for the older version of the SQL Server. The following query returns the same result as the previous sample:

FOR XML PATH statement provides to generate an XML element from the query result. When we execute the following query, it transforms query result to XML:

If we click the result of the query, we can find out the XML more clearly: 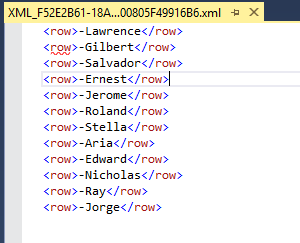 When we add the blank string option at the end of the FOR XML PATH, we will obtain concatenated and separated expressions:

STUFF function helps to delete a specified part of the string and then it can add a new string to it. Finally, we will clear the first extra separator with the STUFF function.

How to generate a concatenated rows in a single cell

The carriage return allows setting the cursor to the beginning of the next line. We can provide this option in SQL with CHAR(13) statement. We will use CHAR(13) statement as a separator parameter for STRING_AGG function so that we can generate concatenated rows into a single cell:

As we can see, we did not obtain the result that we wished in the SQL Server Management Studio result tab. In fact, it misleads us in SSMS because of the query result option. We will change this option in SSMS so that we achieve the proper visual. We will find the Options setting under the Tools menu and then change the Default destination for result option in the Query Results setting. We will change the Results to grids option to Result to text: 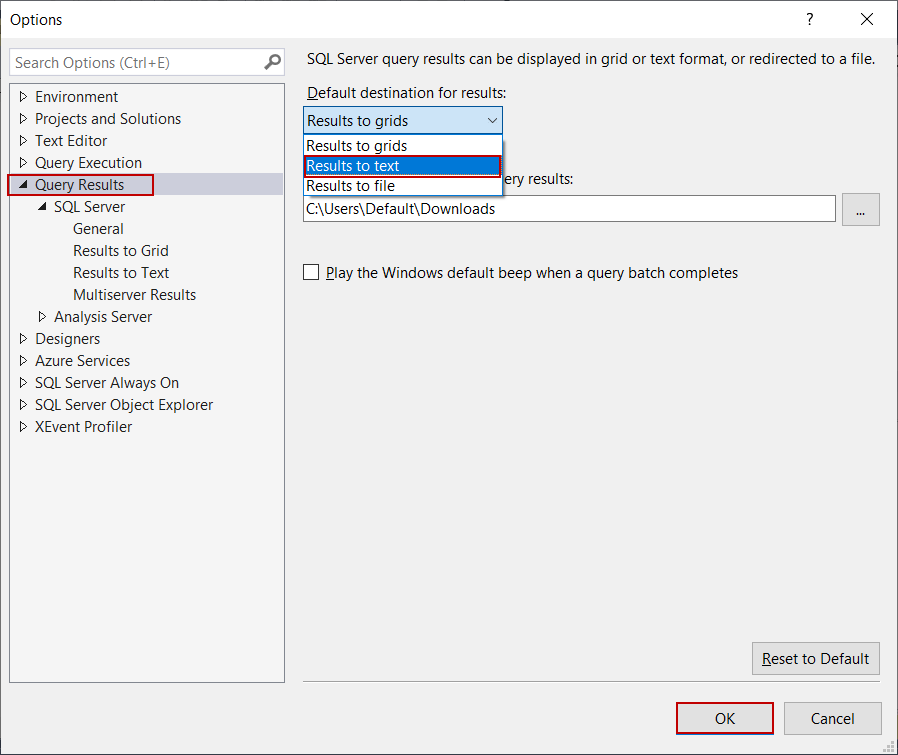 After this option changing, SSMS shows the result in the text. We will re-execute the same query in a new query window: 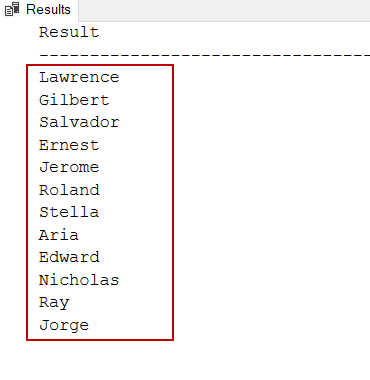 How to remove duplicate values in STRING_AGG function

The result type of STRING_AGG is determined according to the first expression that is taken by the function. There is no doubt that the nvarchar and varchar types concatenated results will be in the same type. However, if we concatenate other datatypes which can be converted into string datatypes (int, float, datetime and etc.). The result data types will be NVARCHAR(4000) for non-string data types. In the following example, we will create a TempTableForFunction table that has only a float data type column. We will try to combine these table expressions through the STRING_AGG function and then the function result will create the TempTableForFunctionResult table. TempTableForFunctionResult column will be generated according to STRING_AGG function result datatype:

At this point, we have to take account of one issue about the STRING_AGG function, it sorted the numbers properly. If we look behind at the scene of the query, it means that we will analyze the execution plan of the following query with ApexSQL Plan:

The sort operation is processed before the Stream Aggregate operation so the numbers are sorted out properly. On the other hand, there is a warning sign shown over the SELECT image. If we hover over this image, we can find out more details about this issue:

In this article, we explored the STRING_AGG function in SQL and completed various examples of this function. STRING_AGG is a very useful and simple function to convert rows expression into a single string. On the other hand, we can use the older version methods to solve these types of issues.