There are many reasons for terminating a long running SSIS Package. Picture a scenario whereby an inexperienced DBA/developer accidentally kicks-off a monthly job instead of a daily job, inadvertently impacting SQL Server performance. Whatever the reasons, you are more than likely to encounter a situation in which you have to temporary stop a long running process.

Although SQL Server makes it easy to terminate undesired processes, you are likely to receive ambiguous error log messages for your actions depending on the mechanism used to terminate that process. In this article we take a look at how stopping a long running Integrations Services Catalog package can be logged differently when doing it from SQL Server Management Studio (SSMS) versus Integration Services Server (ISS).

A case in point

To simulate a long running package, I setup an SSIS demo project that contains Package Sleep.dtsx which uses a Script Task. The Script Task uses a Thread.Sleep method to add a 10-minute time delay for every package execution. The main method of the Package Sleep.dtsx is shown in Script 1. 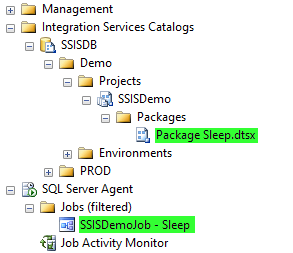 Integrations Services Catalog has a built-in All Executions report that basically list recent executions. We will be using this report to retrieve details about the package execution. The report can be accessed as shown in Figure 2.