In this article, we will look at the 2 different SQL syntax checker tools that help to find the syntax errors of the queries without executing them.

What is a SQL syntax checker?

What is the query parsing in SQL Server?

When we submit a query in SQL Server to execute, it performs 3 essential phases during the execution of the query:

SQL Server Management Studio (SSMS) is an advanced integrated development tool to manage, administrate, and configure SQL Server and it also offers a query editor option to develop and execute T-SQL queries. We can find a Parse button on the query editor toolbar of SSMS, that only checks the syntax of the selected statement or all statements that are given by the users. So that, we can use SSMS as a SQL syntax checker tool.

Here we need to take into account that, when we parse a query the compile and execute phases are not performed. In the following example, we will check the syntax of a very simple query. To validate a query syntax consists of only 2 simple steps: 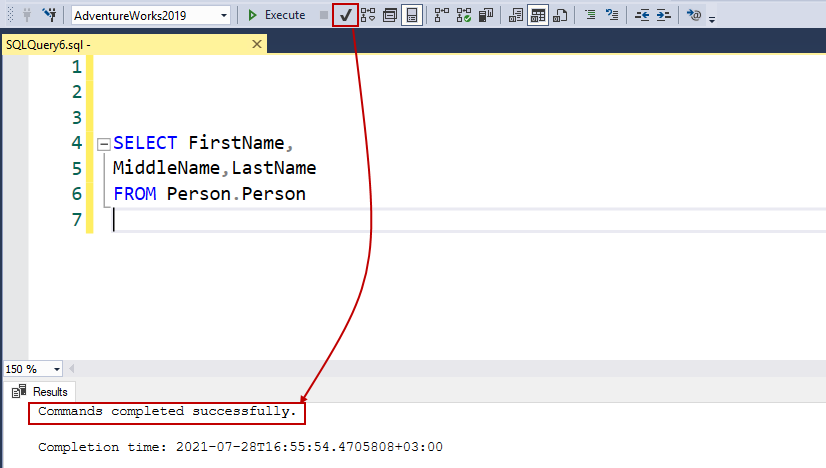 As seen, the query syntax has been validated successfully. Now we will remove the FROM clause of the statement and re-parse the query. 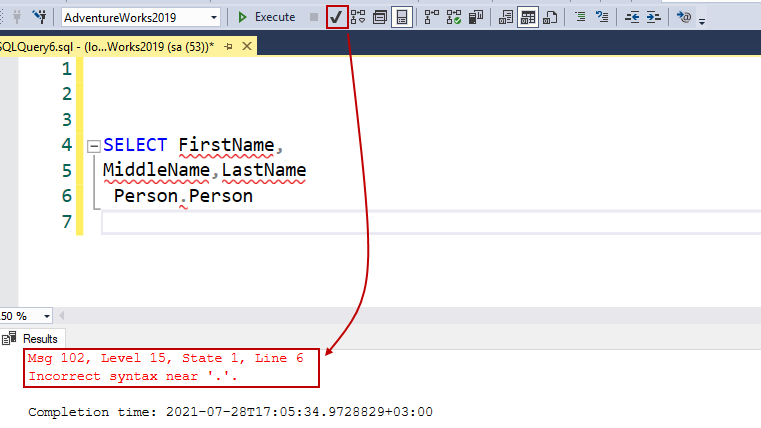 After the re-parsing of the query, SQL Server returns an incorrect syntax error. Another option to check the syntax of the queries is using the SET PARSE ONLY command. This command configures the session into parsing mode.

SQL Fiddle is an online web application that can be used to practice or share queries with their schema build script for different database systems.

Besides this, we can use SQL Fiddle as a SQL syntax checker but we need to create all objects that are placed in the query. For example in this sample query, we can build the schema and execute the query.

At the same time, it shows the execution plan of a query after its execution.

How to compile queries with no execute: SET NOEXEC ON command

After enabling the NOEXEC option for a session, SQL Server parses and compiles each statement of the query but it does not execute the query. The advantage of this command is to perform the parse and compile phases. NOEXEC option provides the deferred name resolution, so it controls only the referenced if one or more referenced objects in the batch don’t exist, no error will be thrown. We will explain this concept with a very simple example. In the example query, everything is okay because the table and columns exist and syntax is also valid

In the following example, the table does not exist but the query is validated but not compiled.

In this last example, SQL Server does not find the referenced objects so it will return an error.

When we only parse the following query the result will return successfully but the syntax of the query is invalid because of the missing column names after the group by.

Despite that, after enabling the SET NOEXEC option, the query result will return an error.

This example shows the NOEXEC and PARSEONLY option differences. When we correct the misspelling of the syntax, SQL Server does not return any error.

As a second step, we will drop the execution plan that is stored for the sample query. We will pass the plan handle data as a parameter to the DBCC FREEPROCCACHE.

Before executing the query, we can create an extended event session to observe the query compilation event. This extended event must include the query_pre_execution_showplan. This event captures the SQL statement is compiled. At the same time, this event shows the execution plan in an XML format.

As we have explained, after enabling the NOEXEC command the query is compiled by the query optimizer.

In this article, we have looked at two different SQL syntax checker tools to validate our queries without executing them.