We will obtain many benefits from using open source software tools and the three greatest advantages for companies where these tools apply are:

Even when we’re considering security, we should not overlook the advantages of open source tools, as these advantages can help us in some areas. As we see in the below image, in many environments we may be able to demarcate the applications which require strict security from applications which may not carry as strict rules. Consider a data environment where we have PII data, which must have strict rules, with data from public sources. We could keep and analyze the data in open source tools, while keeping our PII data separate in a more secure layer, with a queue layer that delays communication between the secure and applications layers (see below image). This means that we can use open source tooling in less strict environments (the “application layer” in the below image), if security is a concern, or we can architect our environment in a manner that allows us to use open source tooling anywhere – such as refraining from storing data that could compromise our environment. 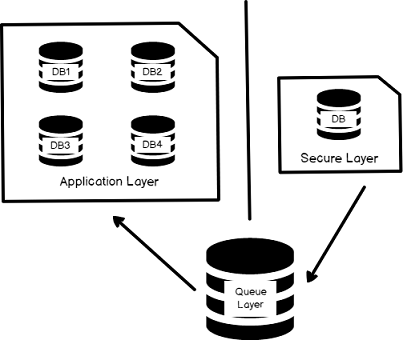 We may consider using open source tools in our application layer but avoid them in our secure and queue layer. The queue layer allows us to delay communication between layers to thoroughly validation the communication.

In the advantages of open source, I did not include the “many eyes” argument without evidence that we often hear and there’s a reason why. While I agree with some people that open source tools can come with many people scrutinizing the tool, this is often only true for a small set of the overall open source universe. There’s also a danger in this argument which social psychologists call the diffusion of responsibility (see below image) – “I don’t need to worry about the security of this library because other people are looking at it.” How do we actually know this? 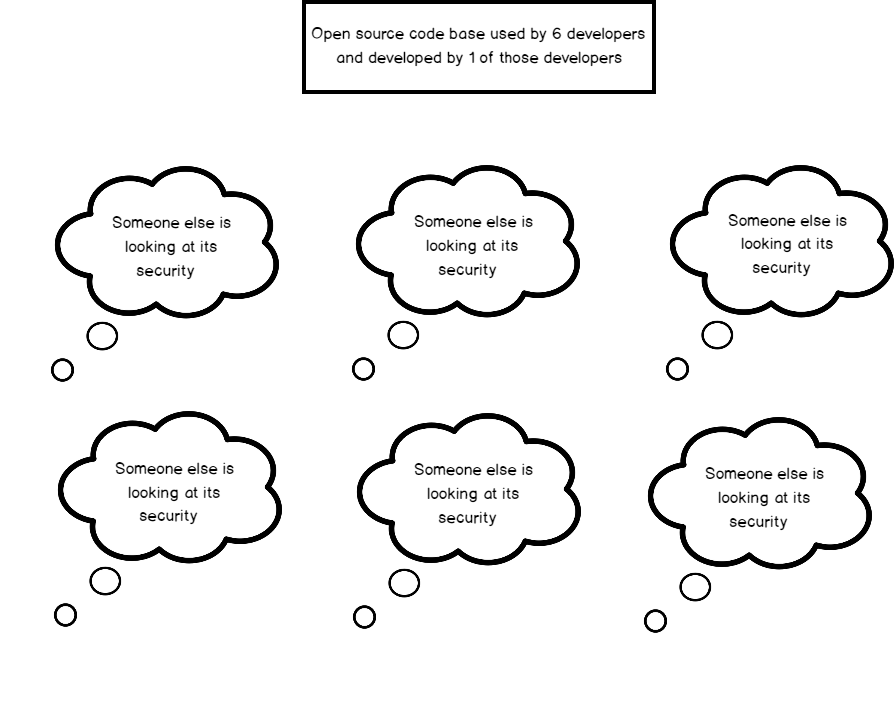 In the image we see six thoughts using code with the belief that other developers are evaluating the security of their code when all developers believe the same, but are not evaluating its security.

This problem compounds when we see a proliferation of new open source tools, as attention to each tool begins to thin, increasing the probability that a flawed design is checked-in to the tool. As one security expert once warned me, “Hackers rely on developers using tools they don’t fully understand.” If a developer can only explain what the library does, that’s not enough. Where are the possible security holes in the library?

Another drawback to open source tools is that they add new inputs and outputs in our system (communication) among actors (applications, databases, tools, etc) that we may not fully understand or monitor, especially if we don’t thoroughly test them. For an example, suppose that we use a tool that needs to be updated from time to time and experiences a bug without an update. To update software means we have to add something to our system – an input into our system. This drawback increases if we assume that others are carefully evaluating the library when they are not. Tools as simple as browsers have experienced zero-day compromises, so even simpler software that we assume is safe, can come with dangers. 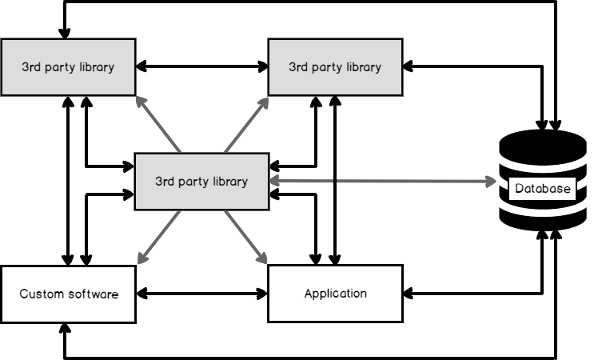 In the above image, we see communication (inputs and outputs) between actors in a system. Each of these communication points could be points of possible compromise.

How to address the disadvantages

First, security concerns do not apply to every company equally, as we’re seeing a growing number of companies opting out of storing data that require complex security. This doesn’t mean that these companies can do anything they want, but it does mean they have more flexibility when they’re considering how they want to design their applications. As we continue to see security compromises, these companies will continue to have a competitive edge.

Second, we should recognize when we’re faced with the diffusion of responsibility regarding an open source tool – when people assume someone else is measuring the security of the tool. Some of the patterns with open source tools are:

Once we know who’s evaluating the tool from an open source perspective, we can query the developers involving our concerns with security and our use. In addition to their answers, we can also check this information for ourselves. In a similar manner, if we’re reading about an open source tool, we should start with security, then look at the what it offers. If we’re not comfortable with the security, we should avoid it, regardless of its convenience.

To prevent watering hole hacks, never publicly discuss outside appropriate sources what open source libraries you use and when contacting developers behind an open source library, do not contact them with any affiliation to a company. While watering hole attacks are generally associated with websites, these may be used with open source tools where hackers identify popular tools and try to compromise them. Never forget that a hacker can create or contribute to an open source with the intent of compromising the people who use the tool.

Third, when we have applications with communication involving secure information and data, we should design in a manner that allows being strict in our validation of the communication. An example of this would be a request for PII data for a customer which is placed into queue and the queue delays the information from being sent for a period while the request is validated (again) and the data are sent securely. The faster we can get our own data, the faster a hacker can. If we delay requests for high priority data, the hacker has another obstacle too.