Memory, processor, and disk performance parameters are most commonly monitored metrics for identifying and troubleshooting SQL Server performance issues. However, sometimes these are not enough. Even with a fast and smooth running server, a client who accesses the server over a slow or saturated network will encounter delays

The network parameters is the metric category often neglected when troubleshooting SQL Server issues. Sometimes, SQL Server problems are caused by network congestion. It doesn’t mean that the cause of the bottlenecks originate on SQL Server

All network performance metrics are easiest to read and understand when there are no applications except SQL Server running on the server, as nailing down the application that causes excessive network traffics is simple. Then, you should search for SQL queries, clients, and events that transfer large amount of data over network

The Network Bytes Received/sec counter shows the byte rate at which information is received over each network adapter. The bytes used for data packet framing are also counted and included in the value

The counter shows “how many bytes you get from the NIC. This is a measure of the inbound traffic” [1]

You can use this counter to calculate the incoming data rate based on the total available network bandwidth, as this information is easier to understand and identify potential network clogging

There is no specific threshold value. However, have in mind that Network Bytes Received/sec is a component of the Total bytes/sec counter, which should be less than 50% of total network bandwidth

It’s recommended to watch this counter overtime and determine trends. Any unexpected peak in network activity should be investigated and the origin of the massive network traffic should be identified

“This is how many bytes of data are sent to the NIC. This is a raw measure of throughput for the network interface. We are really measuring the information sent to the interface which is the lowest point we can measure. If you have multiple NIC, you will see multiple instances of this particular counter.” [1]

The same as with Network Bytes Received/sec, there is no specific threshold, but you should have in mind the Total bytes/sec value

As expected, the sum of Bytes Received/sec and Bytes Sent/sec is equal to the Bytes Total/sec value. It is the byte rate at which data is received and sent over each network adapter. Framing bytes are included

“This is simply a combination of the other two counters. This will tell you overall how much information is going in and out of the interface. Typically, you can use this to get a general feel, but will want to look at the Bytes Sent/sec and the Bytes Received/sec for a more exact detail of the type of traffic.” [1]

When investigating high Bytes Total/sec values, check the %Disk Time counter for the physical disk and %Processor Time values. If the latter two are normal, this is an indication of a capacity problem that can be solved by network interface configuration or adding an additional network adapter. Also, network re-configuration and creating subnets can solve the problem

The Current Network Bandwidth metric “Shows an estimate of the current bandwidth of the network interface in bits per second (BPS). For interfaces that do not vary in bandwidth or for those where no accurate estimation can be made, this value is the nominal bandwidth.” [2]

The Bytes Total/sec value for all servers on a network should be less than 50% of the total network bandwidth. If constantly higher, additional investigation is required. The first step is to determine the applications that are saturating the network. Have in mind that some operations, such as creating SQL Server database backups on a remote storage, use a lot of network bandwidth

The ratio values higher than 80% indicate very high network utilization that should be attended immediately. If the ratio is close to 100%, it means that you’re using almost maximum network capacity, and that additional traffic will cause bottlenecks, which will reflect in delays. This situation can be solved by increasing the bandwidth (which is sometimes not easy to achieve, or not possible at all), or segmenting the network 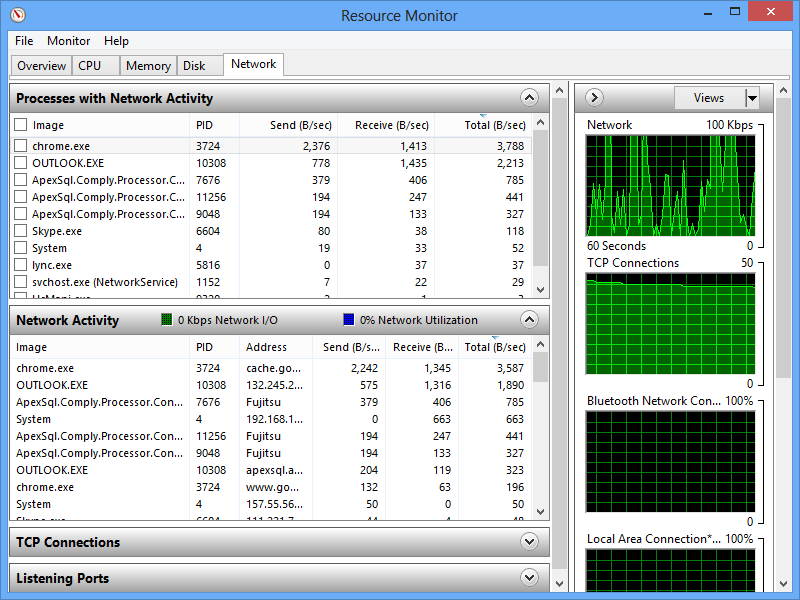