SQL Server Performance Tuning can be a difficult assignment, especially when working with a massive database where even the minor change can raise a significant impact on the existing query performance. Performance Tuning always plays a vital role in database performance as well as product performance. A query can be optimized with the proper evaluation of a piece of code or SQL Statements. The important thing in Query Optimization is to understand, which process or expression needs evaluation in the piece of code. Everyone expects to get a quick response from the query on the production, but How?

Performance Tuning deals with the specifics about the Server, Client, Design & Architecture, Database Engine, Hardware & Network design. As the initial step of SQL Server configuration, we need to calculate the required Buffer Memory (RAM), Storage, CPU’s, etc. Different types of hardware are available with various quality in the market to perform the best. The below image represents what hardware configurations are required to be monitored to observe the performance. 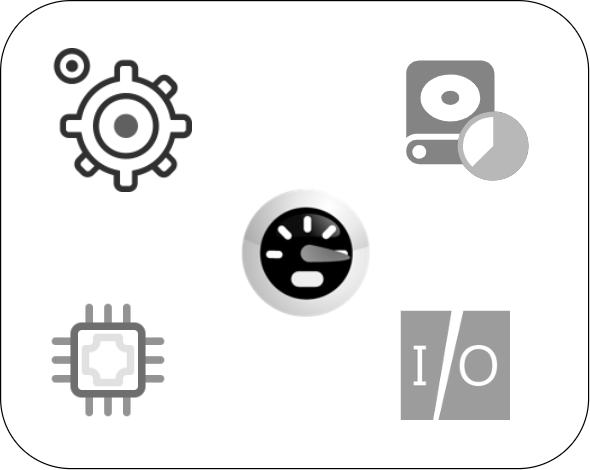 Managing the hardware for SQL Server is not the only goal to get high performance with the SQL Server. But systematic designing and monitoring are required to make it available for better long-term performance as well. If database architecture requirement is to configure multiple SQL Server instances in the single machine, then the Database engineer has to calculate and design the plan for hardware allocation according to the usage.

Below you will find the critical performance parameters for performance tuning with different categories.

SQL Server loads the data into the RAM, which is processed before processing or returning to the client. What should be the RAM value for the SQL Server? Buffer memory should be of a size that is enough to maintain active data of your database. Query logic and data manipulation of each SQL request will be performed in the RAM for better performance unless fetching all data from the data page and manipulating it. If your SQL Server is not configured with enough RAM, then the older cache will be removed, and new active data will be kept in the buffer memory. Each edition and version of SQL server has different criteria for the Memory Allocation (RAM). 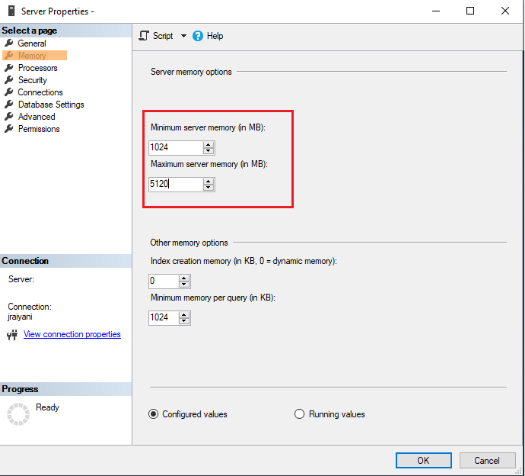 Multithreading by processors improves the performance of parallel SQL Server thread executions. SQL Server allows specifying the processor sockets (Numa Nodes) with the cores and their Logical CPUs for the processing affinity and I/O affinity. A socket is the numa node at the hardware side; the dual-core processor will have two logical CPU’s and the quad-core will have four logical CPUs. The user system and laptop have a single socket, and servers use multiple sockets to boost performance.

Users can configure the CPU allocation by the server properties. By default, an automatic option will be selected for allocating the processor to SQL Server dynamically as available to process the task. While unchecking the automatic option, the user will be allowed to specify the logical CPUs for the SQL Server thread process and I/O operations.

Most of us know I/O stands for Input/output and IOPS stands for the Input/output per second. IOPS clearly defines a ratio of the number of operations performed by storage within a period to the duration of this period in seconds, and it is the unit to measure read and write operations on the storage device. There are many parameters of IO, which can affect the SQL Server performance and that needs to be taken care of for the performance tuning.

Physical Disk and Logical Disk both can be used in Infra standard. Logical Disk is the logical partitions of the physical disk with the drive letter. The logical disk is used to distribute the data into multiple logical units. Each disk has the IOPS life with the (n) number of total IOPS. When it crosses this digit, disk refreshment may be required to maintain the performance. Therefore, the operational team performs tech-refresh with updating the hardware on the server. Bytes per Second Disk IO is also one of the performance parameters for the disk. Different quality disks have various capacities to perform in a range of IO per second on disk.

These monitors and metrics are also costly while fetching details in a predefined polling period. So, configure the detailed monitor for the server, but it should be available when its basic monitors alert the critical situation. Nowadays, many third-party monitors are available in the industry with the configurable parameter to set up as required.

Performance Tuning at the hardware level isn’t a simple assignment for the users. Users can gain that expertise when an issue happens with the hardware resources and solve it with the challenging investigation. And that is the reason, it is a good practice to have a strong Technical Operation team in an organization.