One of the most common wait type seen on SQL Server and definitely one that causes a lot of troubles to less experienced database administrators is the PAGEIOLATCH_SH wait type. This is one of those wait types that clearly indicates one thing, but which background and potential causes are much subtler and may lead to erroneous conclusions and worse, incorrect solutions

The Microsoft definition of this wait type is:

Occurs when a task is waiting on a latch for a buffer that is in an I/O request. The latch request is in Shared mode. Long waits may indicate problems with the disk subsystem.

Page latches are actually light locks that are not configurable, placed by SQL Server internal processes as a way of managing access to the memory buffer. Pahe latches are placed every time that SQL Server has to physically read data from the memory buffer to a hard drive or from hard drive to the memory buffer and the thread must wait until this completes causing the PAGEIOLATCH_XX waits. The moment the requested data pages became available after the I/O reading completes, the thread will get requested data and will continue with execution. So obviously, it is normal to encounter some PAGEIOLATCH_SH waits 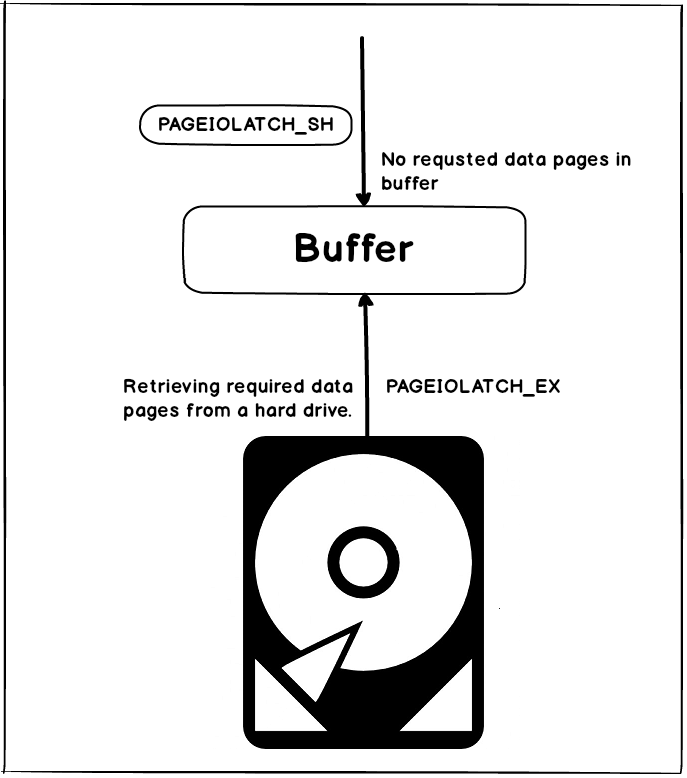 I/O subsystem has a problem or is misconfigured

The PAGEIOLATCH_SH could indicate a problem with the I/O subsystem, i.e. problem with the disk. It is often possible that faulty disk does not trigger the monitoring system and in fact the disc issues could be very tricky, as disk could experience various issues which are not black and white (work/doesn’t work). Also the drives that are part of the RAID system could be even more trickier to detect considering the RAID own ability to deal with errors. In such cases, checking the S.M.A.R.T. (Self-Monitoring, Analysis and Reporting Technology) log should be the first step. In situations when the SMART log indicates a possible error or even an imminent drive failure, this could be the actual root cause of the excessive PAGEIOLATCH_SH.

For those with RAID controllers, testing the RAID hardware/software for malfunctions or errors is also recommended.

A misconception in using the physical and logical drive is often the cause of a slow and problematic I/O subsystem. Quite often users are distributing a different part of the systems (OS, swap file, SQL Server data files, backups etc.) to a different disk partitions (C:, D:, E:, F: etc.) in order to load balance the I/O subsystem which is completely fine and recommended. But there is often misconceptions between load balancing using physical and logical disk drives. The following use case will help in understanding the problem and a provide potential solution

RAID arrays with multiple discs are quite common in larger organizations. In the following example, the RAID 5 array with 4 hard drives will be taken as an example. The RAID array is further divided into 3 partitions C:, D: and E: 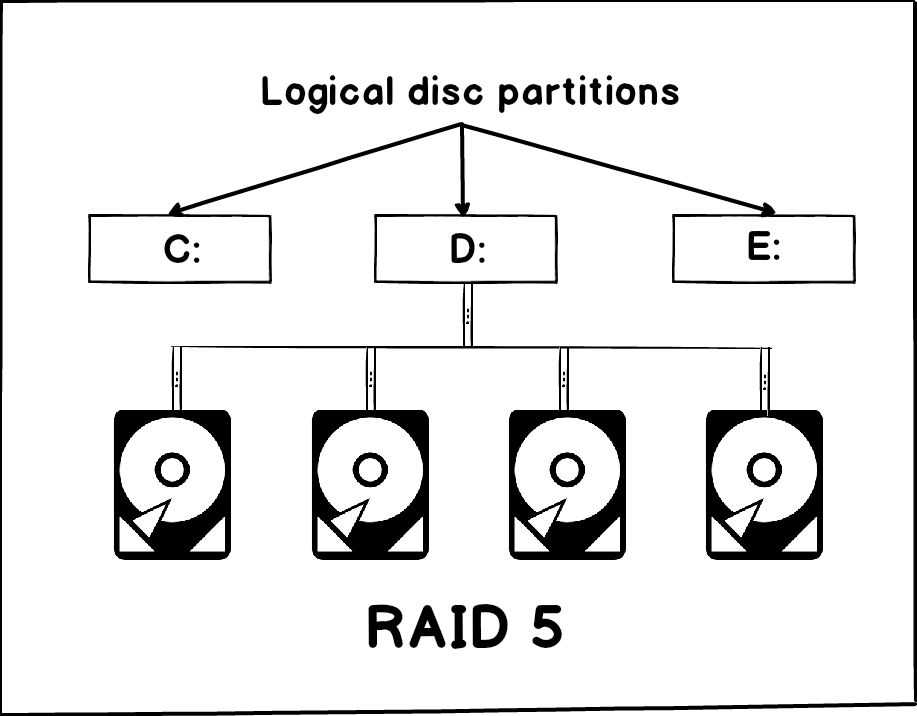 What must be clear here is that those partitions are actually logical, not physical partitions, as they share the same raid array and thus the same four physical disks – logically split RAID 5 array into 3 partitions. The RAID array for an operating system represent the single disk drive and it is not possible for OS to distribute specific data to a specific physical drive. In such scenario, OS, the page/swap file, SQL Server data files and tempDB are share same physical RAID array, namely the same physical drives. In such configurations, the different parts of the software systems are putting the pressure on each other, but also the different parts of the same software can conflict with each other (I.e. different SQL Server processes might be heavily dependent on I/O and thus conflicting to each other. In such a scenario, it is very possible to encounter excessive PAGEIOLATCH_SH as different SQL Server processes as well as different applications and OS processes could severely affect the performance of the I/O subsystem causing the slow transfer of data pages from disk to a buffer pool.

The principles of the RAID system itself will not be explained here any deeper, as it is not of particular interest for understanding the main problem

So instead of having partitions distributed across the same drives, it is actually important having the physical hard drives that will be used for distributing the different parts of the software to ensure the proper load balance of the I/O subsystem

For SQL Servers that are based on SAN (Storage Area Network) or NAS (Network Attached Storage) storage systems which are network dependent, every network latency or network slowness might/will cause excessive PAGEIOLATCH_SH (but also the other PAGEIOLATCH_XX waits) wait type values due to inability of the SQL Server to retrieve data from physical storage to a buffer pool fast enough

If the PAGEIOLATCH_SH wait type values are consistently larger than 10-15 seconds, this could be a reliable indicator of pressure on I/O subsystem and three above mentioned causes should be carefully investigated

In an ideal scenario the memory buffer should be big enough to store all the necessary data for work that SQL Server has to perform. In such an ideal scenario, since all the necessary data is stored in the buffer pool, there will be no requirements for physical data read, and the only changes that will be performed would be the buffer pool data updates. Real world scenarios are rarely ideal, so physical I/O readings from storage to a buffer pool and vice versa are inevitable. The fact that SQL Server is performing the physical I/O readings from the storage is not the something that should be of concern as long as SQL Server performance is not affected. This is why it is important for a DBA to create a baseline of the system and as long as the physical I/O reads are within the created baseline no intervention should be required.

What has to be tracked and alerted for is when there is a sudden breach of the high threshold of an established baseline, especially if this occurs without visible reason and it lasts for prolonged period of time. This is almost a certain indicator that SQL Server is suffering from the memory pressure, which could be caused by a different reason including:

When the memory is the cause of the excessive PAGEIOLATCH_SH, whether the to perform performance optimization and tuning of SQL Server or just to add/increase physical memory should be carefully considered. Troubleshooting and performance optimization in such cases can be time consuming and not always efficient in producing desired results. It is not unusual that after spending lots of time in tuning the SQL Server to avoid memory pressure, a DBA to ends up with no solution but to add more physical memory to a system. With the current price of memory, just increasing physical memory size could be not only instant/faster but also a cheaper (compering to the DBA labor) and thus more optimal solution in most cases

In situations when high safety mode is used in database mirroring, or when the synchronous-commit availability mode (synchronous-commit mode) is set for AlwaysOn AG, high availability is emphasized over performance. In this case, high availability is achieved at a cost of increased transaction latency which means that a transaction on the principal server or the primary replica cannot be committed until it receives a message that the mirror or secondary replica that the secondary database enters the SYNCHRONIZED state. In situations when the mirroring operation is delayed for any reason (network, high O/O etc.) it require increased time for physical I/O data reading and thus the PAGEIOLATCH_SH times as the thread will have to wait for the data until the synchronized signal is sent. While this often appears similar to query blocking, the actual root cause of this lies in problems with synchronization

Poor index management is another cause of high incidents PAGEIOLATCH_SH wait types due to forcing the index scan (table scan) instead of index seek. Generally speaking, index seek is always preferred and having index scan in execution plans is something that should be investigated. Having index scan means that no indexes that are relevant to particular query that is executing were found, so SQL Server will have to perform a full table scan, meaning that it will have to read every single row, from first to the last one, in the table. This will cause, in most cases, all pages related to the table have to be read from the disk, meaning that physical I/O reading will be performed – a direct consequence of this will be increased incidents of PAGEIOLATCH_SH wait types. The reason for this could be often that indexes doesn’t exists or that there is a missing or missing/altered nonclustered index that is required by a query.

A parameter sniffing might also cause the unwanted and unneeded index scan instead of index seek, in situations when the query results could be significantly different for different parameters. During the initial execution and depending on the results retrieved by the query (for example if the retrieved number of rows consist make up a high percent of the total number of rows), SQL Server might decide that it is better to use the index scan instead of the index seek. This means that for every execution of the query, even when the small number of rows is returned the SQL Server will use the same execution plan and it will use index scan, instead of the lighter and faster index seek. Results of this will be increased PAGEIOLATCH_SH wait types due to increased physical I/O reading of the data pages from the disk

So to sum up this article:

* An example of what was explained in the sentence:

So in case number 1, the SQL Server will have to store the execution plan for every query as if different values are used like this:

When SQL Server compares these T-SQL statements it will identify them as different, as they actually are, so every time we use the new value for CustomerId, it will create a new execution plan and will store it in the buffer

In case of parametrized query:

SELECT * FROM dbo.Table1 WHERE CustomerId = @p

Every time it is executed the query text will be identical, so there is no need for the new execution plan as the T-SQL will not change for different values of CustomerId