This article explores inserting SQL carriage return AKA line break and tab in a string along with SSMS behavior while copying data to excel, notepad.

We work with various data types in SQL Server such as int, float, XML, char, varchar, etc. We also use strings for storing data such as the name of employee, company, product review, and feedback. Sometimes, we require data formats such as inserting a line break, tab or carriage return in a string. We might require these formatting while dealing with data in multiple sources such as flat or excel file. Occasionally, you see scattered text after copying data in notepad or excel.

In the SSMS output, we see all text in a single line:

Let’s copy the output in Excel and Notepad. You can see that in both notepad and excel sheet row one and two splits in multiple lines. It retains the carriage return as well while copying the output in notepad or excel:

We might get different behavior of the carriage return with different versions of SSMS. SSMS 2016 and higher removes carriage return. Without carriage return, the output comes in a single line for each row. SSMS 2014 and previous version retains carriage property, and we are split output across multiple lines:

In SSMS 2016 and higher, we can see that “Retain CR/LF on copy or save” checkbox is not ticked. It shows that while copying output to notepad or excel sheet, SQL Server does not retain SQL carriage return on copy/save: 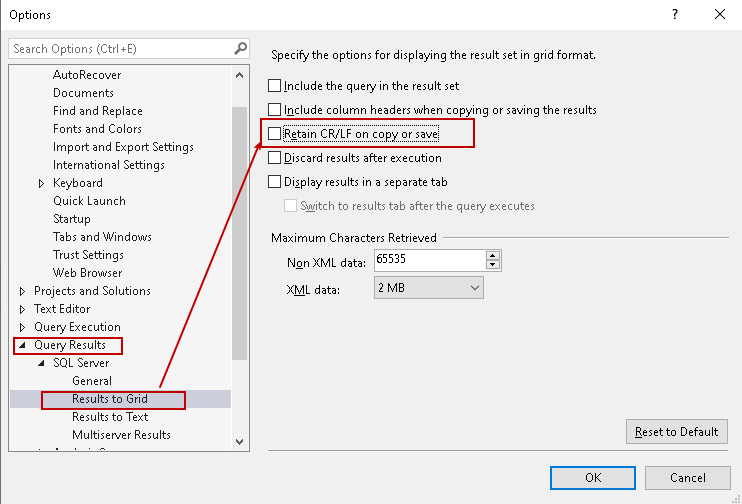 Insert SQL carriage return and line feed in a string

We might require inserting a carriage return or line break while working with the string data. In SQL Server, we can use the CHAR function with ASCII number code. We can use the following ASCII codes in SQL Server:

Let’s explore these ASCII codes with CHAR functions with examples.

Suppose we have a string that contains a month’s name. We use a comma to separate the name of the month. Execute this query in SSMS and view output in Result to text (short cut key CTRL + T) format:

Now, we want to insert a line break after each month’s name. We can replace the comma (,) with a char(10) function. As described earlier, char(10) inserts a line break.

In the following query, we use the SQL REPLACE function for replacing the comma with char function:

In the output, we can see a line break after each month. It formats data with a line break, and only one row gets affected due to this: 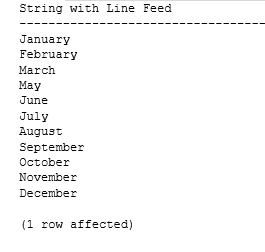 We use the Char(13) function for inserting a carriage return instead of a line break: 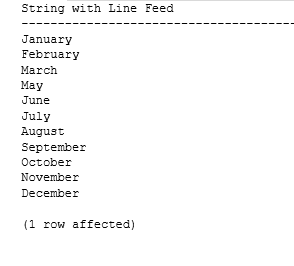 Inserting SQL carriage return and line break in a string

The output of the above query with Char(10) and Char(10) is as shown below: 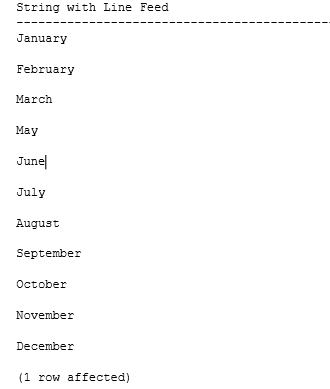 Sometimes we insert tab between characters for formatting purposes. We can insert tab space in a string using the Char(9) function:

In the output, you can string format with a tab between each month:

Suppose we have a table that contains data with a line break. In the following table, we have a line break in the address column:

We use Char(13) for identifying and removing Carriage Return and Char(10) for removing line break along with the SQL REPLACE function. The replace function replaces line break with a space as specified in the query:

In the output, we can see the address field without the line break.