In this article, we will explore QUOTED_IDENTIFIER behavior, default value, and comparison with a different value. Set options at connection level control query behavior in SQL Server. The query might behave differently with different set options and their values.

Most of the developers use SET QUOTED_IDENTIFIER ON/OFF option in a stored procedure and user-defined functions. If you have not used it, SQL Server automatically adds this while scripting out the objects. This article explains the configuration and its benefits.

Let’s create a stored procedure with the following script:

It generates the script in the new query window of SSMS. In the generated script, we can see an option SET QUOTED_IDENTIFIER ON. We have not added any such argument while creating the stored procedure. You can review the stored procedure script again for verification:

You are probably asking yourself why SSMS adds these options while generating a script for an object?

Let’s understand the QUOTED_IDENTIFIER option in SQL Server in the next section.

We use single or double quotes in the script. Suppose we want to store employees’ name in a SQL table. The employee name might include a single quote in the name as well.

Let’s say customer name is O’Brien, if we try to insert this name in a table, we get the following error message:

We can execute the query as shown below, and it inserts record successfully in the table:

We can use single quotes as well to insert the data.

Look at the following example with different values of QUOTED_IDENTIFIER:

It gives the output Rajendra:

Let’s turn this option ON and execute the query.

We get an error message stating invalid column name:

It gives the following error message:

As highlighted earlier, we can use reserved keywords in the object name once we enable the QUOTED_IDENTIFIER ON and SQL Server does not check the string for any existing rules.

In the following query, we use the reserved keyword function as an object:

Once the object is created, we can access the object without specifying the QUOTED_IDENTIFIER option. Both queries execute successfully:

Let’s view the behavior of single quotes along with QUOTED_IDENTIFIER ON and OFF:

With the QUOTED_IDENTIFIER OFF, it gives a similar output. This setting does not impact SQL Server behavior for the single quotes:

In the following example, let’s observe a single and double quote behavior with QUOTED_IDENTIFIER:

Both Select statements return similar output once we turn off the QUOTED_IDENTIFIER option: 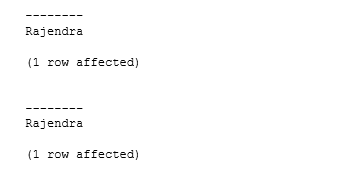 In another example, we use previous Select statements with the QUOTE_INDENTIFIER ON:

We get an error message with the double-quotes. You can also see that SQL Server does not parse the double-quoted string. It cannot recognize the object and highlights the string with an underline: 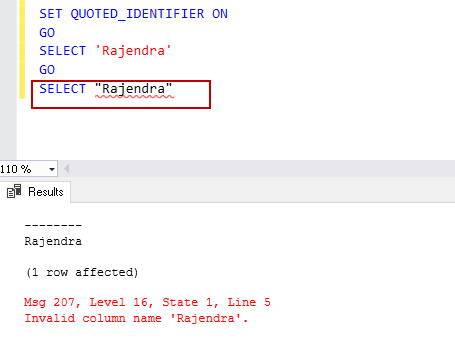 Let’s look at a few complex examples with a combination of single and double quotes in a string: 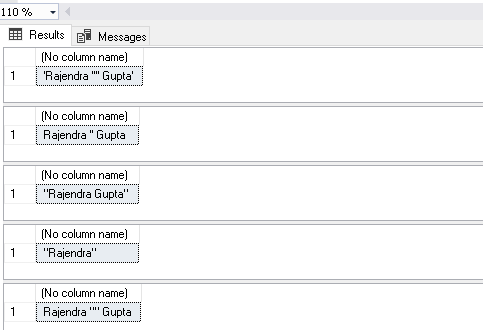 We can control this behavior using SSMS settings. In SSMS, go to Tools -> Options.

It also has a search option in that we can filter out the required configuration. Search for keyword ANSI, and it gives you settings to control query execution behavior.

In this screenshot, we can see it has an option SET QUOTED_IDENTIFIER, and it is enabled. It is the default behavior of SQL Server: 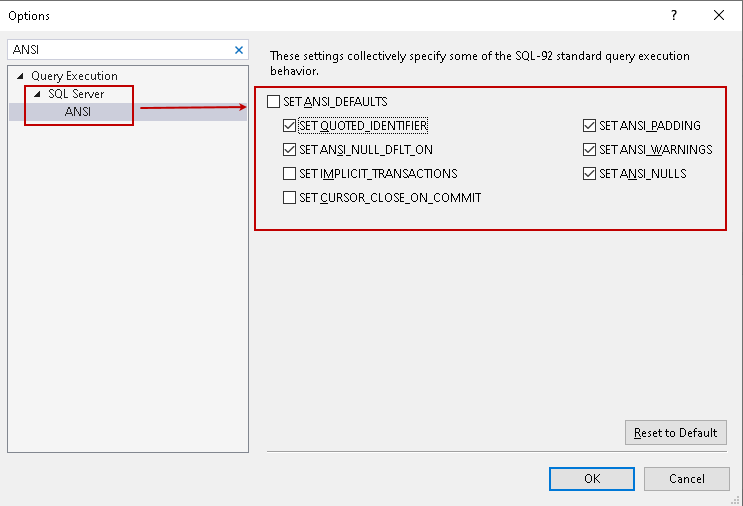 If we want to turn off QUOTE_IDENIFIER, we can remove the tick from the checkbox: 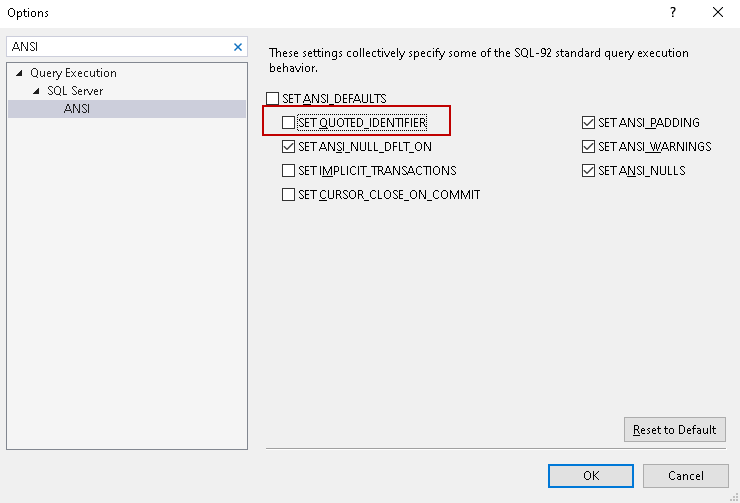 Click OK and restart the SSMS so that this setting can take effect. Let’s create the procedure [dbo].[SQLTest] again and generate the script for it. In the below screenshot, we can see that it has QUOTED_IDENTIFIER OFF now:

We can use the SQL execution plan to view the current value of QUOTED_IDENTIFIER. Enable Actual execution plan before executing the query (shortcut key – CTRL+M): 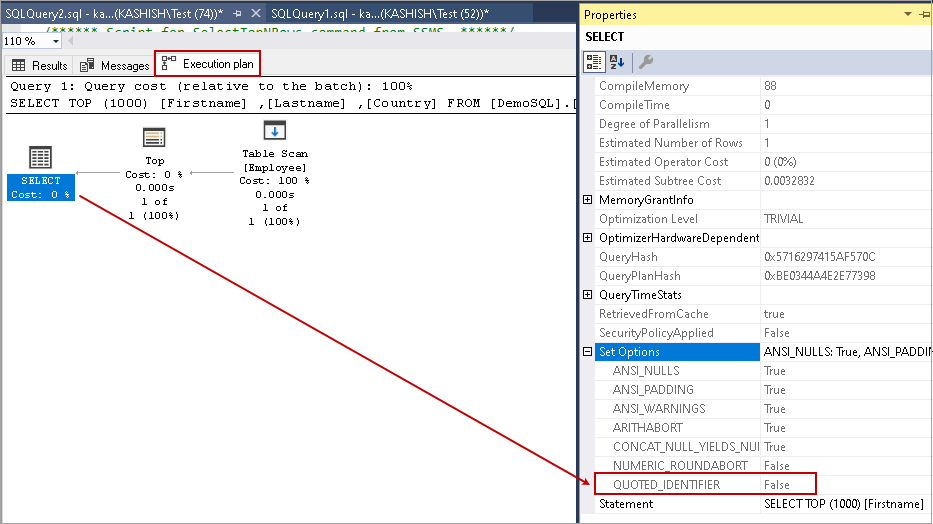 A quick summary of QUOTED_IDENTIFIER

This article gives an overview of the QUOTED_IDENTIFIER set option and its behavior in SQL Server queries with single and double-quotes. We should be careful while changing the default value. You should change as per requirement only.