In this article, we will explore a new SQL Server 2019 feature which is Scalar UDF (scalar user-defined) inlining. Scalar UDF inlining is a member of the intelligent query processing family and helps to improve the performance of the scalar-valued user-defined functions without any code changing.

The DRY (Don’t Repeat Yourself) software programming principle aims to avoid rewriting the same code repeatedly so it enables modularity and code reusability. The functions and stored procedures help to implement the DRY principle to database programming. In this context, the scalar function can be described as below:

The scalar user-defined function may not take any parameter or can take one or more parameters as input and returns a single value. The purpose of scalar functions is to encapsulate a piece of code into the single database object, and in this way, it enables us to use functions in the queries without code repetition. On the other hand, scalar functions may impact performance negatively when they perform for a huge number of rows. To be honest, they can be performance killers.

The SET STATISTICS IO setting offers an I/O statistics report that helps to monitor the disk activity of the executed query and this report helps us to observe disk activities of the executed query. However, the scalar functions I/O statistics can not be measured by this report, and this case cause to observe misleading I/O information. Now, we will execute the following query in the Adventureworks2016 database and parse the statistics output with the help of the Statistics Parser.

As we can see, this query has read the Product and SalesOrderDetail tables and has completed only milliseconds.

As a second step, we will execute the following query and will analyze the I/O statistics. The only difference to this query is that it contains the only ufnGetStock which calculates the inventory level of the products. This function will be invoked for the row number of the query result.

As we can see, there is a dramatic difference between query execution times. However, the I / O values ​​of the query that contains a scalar function remained unchanged. The following table shows the I/O and time statistics of the two queries:

When we expand the QueryTimeStats property of the select operator, we see the UdfCpuTime and UdfElapsedTime. This two-property helps to figure out the impact of the user-defined functions into query execution time. 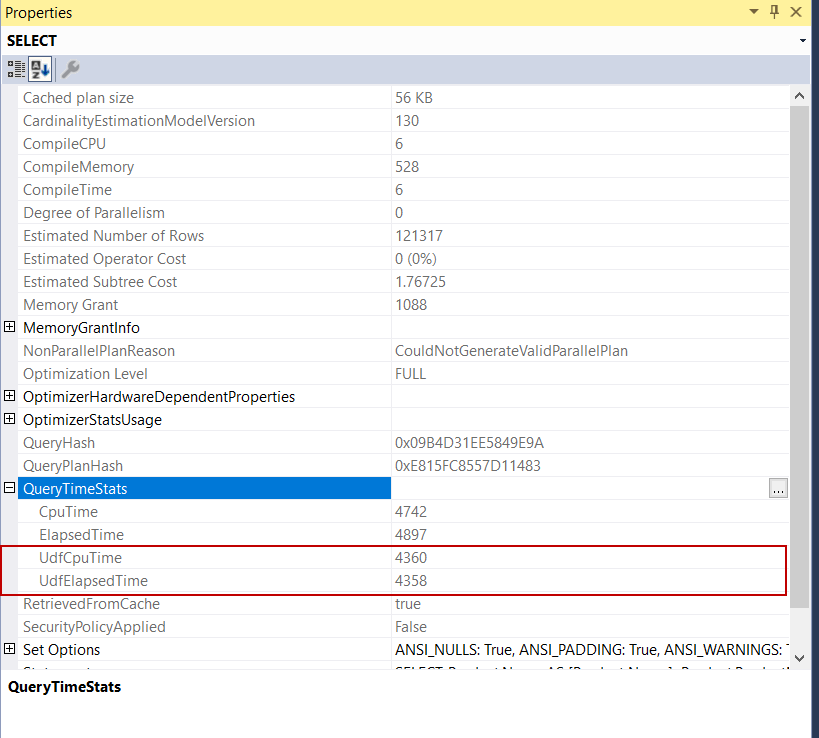 We can make a very simple calculation to understand the impact of the scalar function on the query execution time.

75% of the query time is consumed to invoke the scalar-function. This situation explains why we call scalar functions performance killers.

The queries with the scalar function always run serially.

The scalar functions are performed on how many rows were forwarded from the previous operator. For the following query, this number is 121.317, the ufnGetStock will be invoked 121.317 times.

When we query the dm_exec_query_stats view, we can see the execution value of the ufnGetStock function.

In the imperative programming, a series of command controls determine what the computer has to do and when has to do to obtain the desired result. The scalar UDF functions might include imperative code statements as follows :

The major problem of the imperative code is that it takes incredible effort to optimize and it is also very difficult. However, the scalar UDF inlining feature converts the suitable scalar functions into the subquery and incorporates this subquery into query with the APPLY statement. All these actions were performed during the runtime of the query execution so we don’t need to change any code for the scalar functions. So, the query optimizer can generate more accurate execution plans.

In order to enable this new SQL Server 2019 feature, we need to alter the compatibility level of the database.

After changing the database compatibility level, we will execute our test query that includes scalar function. We will reanalyze its execution plan and I/O statistics.

The red-framed area in the picture has been newly added to the query execution because of the scalar UDF inlining feature. In this execution plan, we can not see the UdfCpuTime and UdfElapsedTime attributes on the execution plan because the query does not invoke any scalar function.

As a result of this case, a more accurate execution plan has been generated. At the same time, the execution time of the query is decreased by 5 times.

The following table shows the comparison of the execution times and I/O statistics of the queries:

On the last row of the I/O statistics comparison of the table, we will see the ProductInventory table because this table is used by the ufnGetStock scalar function. 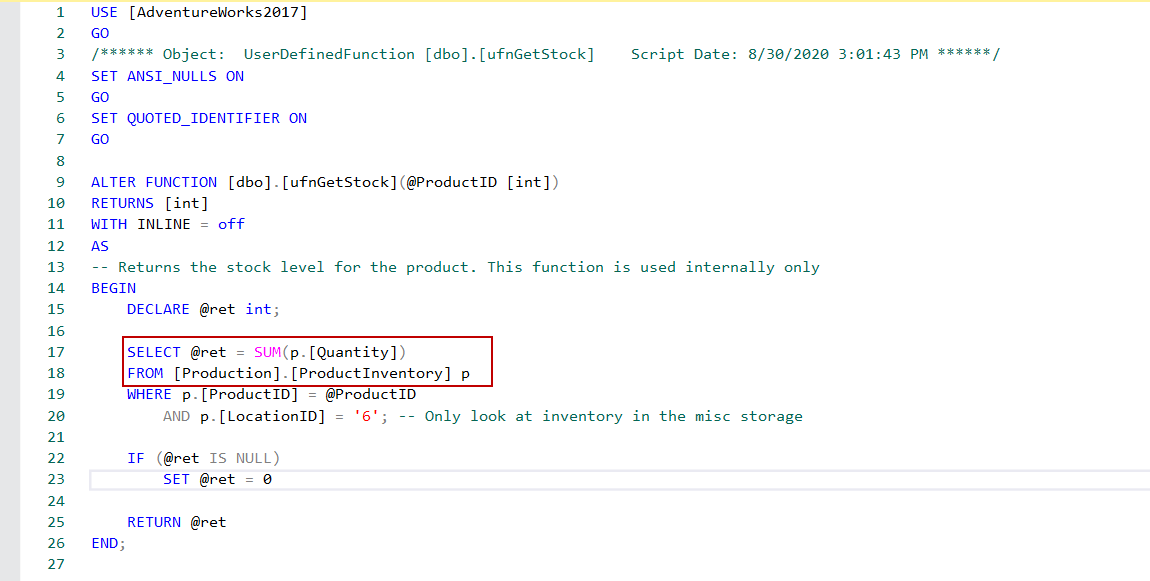 The following query can disable or enable scalar UDF inlining at the database level.

We can disable or enable scalar UDF inlining when we create or alter a scalar function using the WITH INLINE syntax.

As a last, we can disable the scalar UDF inlining at the query level using the DISABLE_TSQL_SCALAR_UDF_INLINING keyword.

The Scalar UDF Inlining feature uses the FROID framework. FROID is an extensible optimization framework that transforms scalar functions into relational algebraic expressions. This code conversion is made by the FROID framework automatically so that the database developers can use the scalar functions without considering performance issues and without making any changes in the code. However, some of the scalar functions can be inalienable when it meets the Inlineable scalar UDFs requirements. At the same time, the is_inlineable column of the sys.sql_modules the function is inalienable or not.