In SQL Server, we normally use user-defined functions to write SQL queries. A UDF accepts parameters and returns the result as an output. We can use these UDFs in programming code and it allows writing up queries fast. We can modify a UDF independently of any other programming code.

In SQL Server, we have the following types of User-Defined Functions.

For this example, I am running SQL Server 2019 2.1 and WideWorldImporters database.

Set the database compatibility level to 140.

Clear the procedural cache using the database scoped configuration option. This will clean our database from any stored execution plan or cache.

Now create the scalar User defined function in WideWorldImporters database. This function will return the quantity based on the description. Execute the below script.

We can use this function similar to a table column object. Run the below command which uses the UDF function as a normal table column.

In the above screenshot, you can see that it took approx 18 minutes to process 228,176 records.

Now let us run the same query with the compatibility level 150 (SQL Server 2019).

Run the query again with this modified compatibility level.

Now let us run the queries again in both SQL Server 2016 and SQL Server 2019 database compatibility level and capture the statistics IO and statistics time along with the actual execution plan to compare with.

If we compare both the execution with compatibility level 140 (SQL Server 2017) and 150 (SQL Server 2019), we can see a significant improvement over the CPU time and the elapsed time.

In below table, you can see the Scalar user-defined functions performance optimization comparison with SQL Server 2019

In this section, we will compare the execution plan on running the scalar UDF with SQL Server 2019 and before. 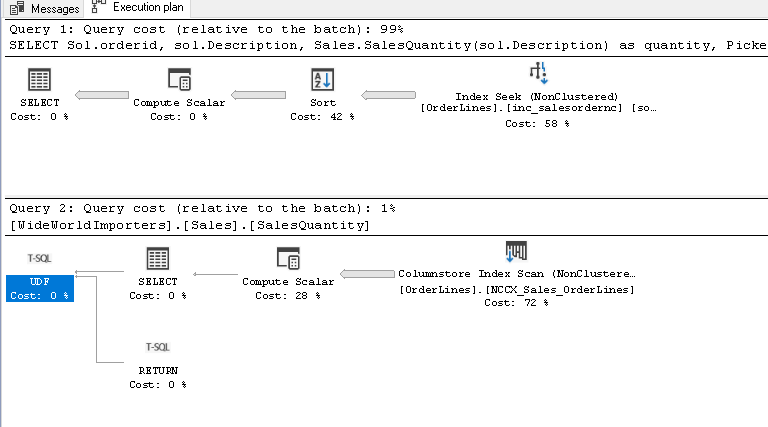 Now, if we look at the actual estimated plan in SQL Server 2019, we get a complex plan compare with the earlier execution plan, as shown in below image. In SQL Server 2019, it is able to combine the UDF operations into a single query plan due to inline functionality.

In this execution plan, it shows the UDF in the lower area. You can see multiple operators to execute the query. SQL Server 2019 inlines the scalar UDF to optimize the execution of the query. It does not consider this UDF as a separate identify however runs it similar to a normal select statement. Therefore, we get the performance benefits in terms of CPU, memory, execution time etc.

Conditions to inline the scalar UDF in SQL Server 2019

SQL Server 2019 can inline the scalar function if the below conditions are met.

We can use this UDF inline functionality in SQL Server 2019 in the following ways.