In this article, we will learn how to query the data as well as database objects hosted in an instance of Azure Database for PostgreSQL using psql and export the results of the query to a file.

Creating an instance of Azure Database for PostgreSQL

It is assumed that an instance of Azure Database for PostgreSQL is already in place. It is also assumed that the pgAdmin tool is already installed and psql is already invoked using pgAdmin. We covered this subject in the previous article, so those who are new to these tools can refer to the last article to set this up before proceeding with the following exercise.

When we work with the pgAdmin tool, the browser pane would list several objects categories related to postgreSQL. While working with the psql tool, which is a terminal-based tool, we would invoke commands to explore and inspect these database objects. So, before we proceed with the exercise, let’s quickly understand what these objects mean in a concise manner. Below mentioned is a list of database objects categories with a short description of the same.

Now that we understand the significance of these database object categories, we can get started with the actual exercise of exploring these database objects and data in them. It is assumed that the psql tool is already open and connected to an instance of Azure Database for PostgreSQL. Tables are one of the primary database objects that almost everyone works with. To list the tables in a database hosted on an instance of Azure Database for PostgreSQL, we can just issue a simple command “\dt” to list all the tables, and the result will look as shown below. Here we can see the name and type of the database object as well as the owner of the same.

Let’s say that we intend to explore all the views in the database instance, as the next logical database object in the category of tables and views. We can issue a command for the same – “\dv” where v stands for view, and the result would look as shown below. 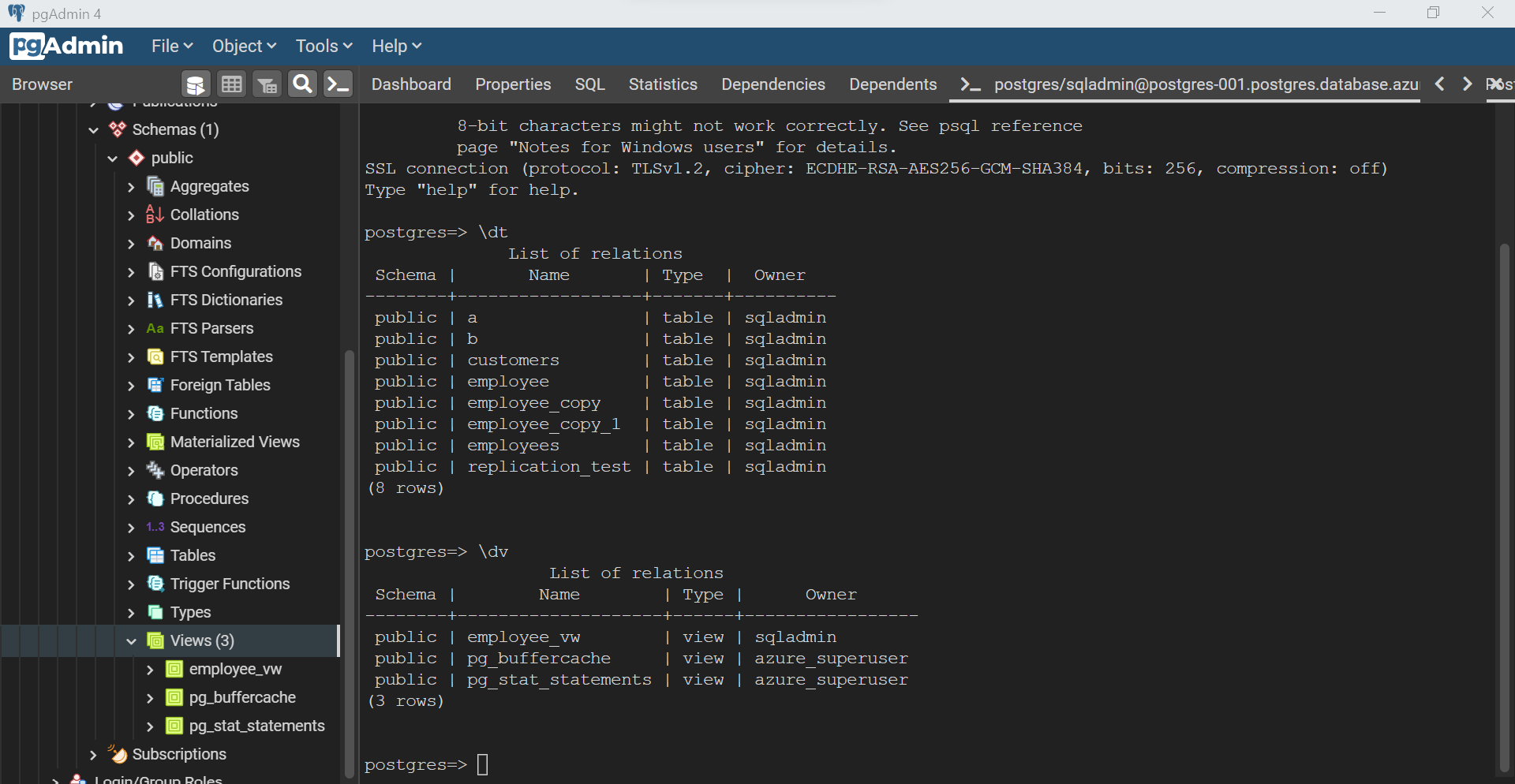 Let’s say that we intend to list a specific table with the exact name or a matching pattern, we can specify the same as well using the standard command for listing tables. As shown below, the command “\dt Employee” will list the employee table only, as this command is using table name as the parameter and filter the resultset based on the parameter.

Before we query the table, we may want to know the schema of the table in question. In that case, we can issue the command “\d Employee”. Here we are asking to explore the schema of the database object which is passed as a parameter to the “\d” command i.e., “Employee”. By default, it would be assumed that that table is in the public schema. If the database object is found, the schema results would be returned in output as shown below. Here we can see the fields, data types, collation, nullable, default values, indexes, and constraints associated with the table.

In case, we intend to explore all the database objects of interest, we can just issue the command “\dS” to list all the objects as shown below. 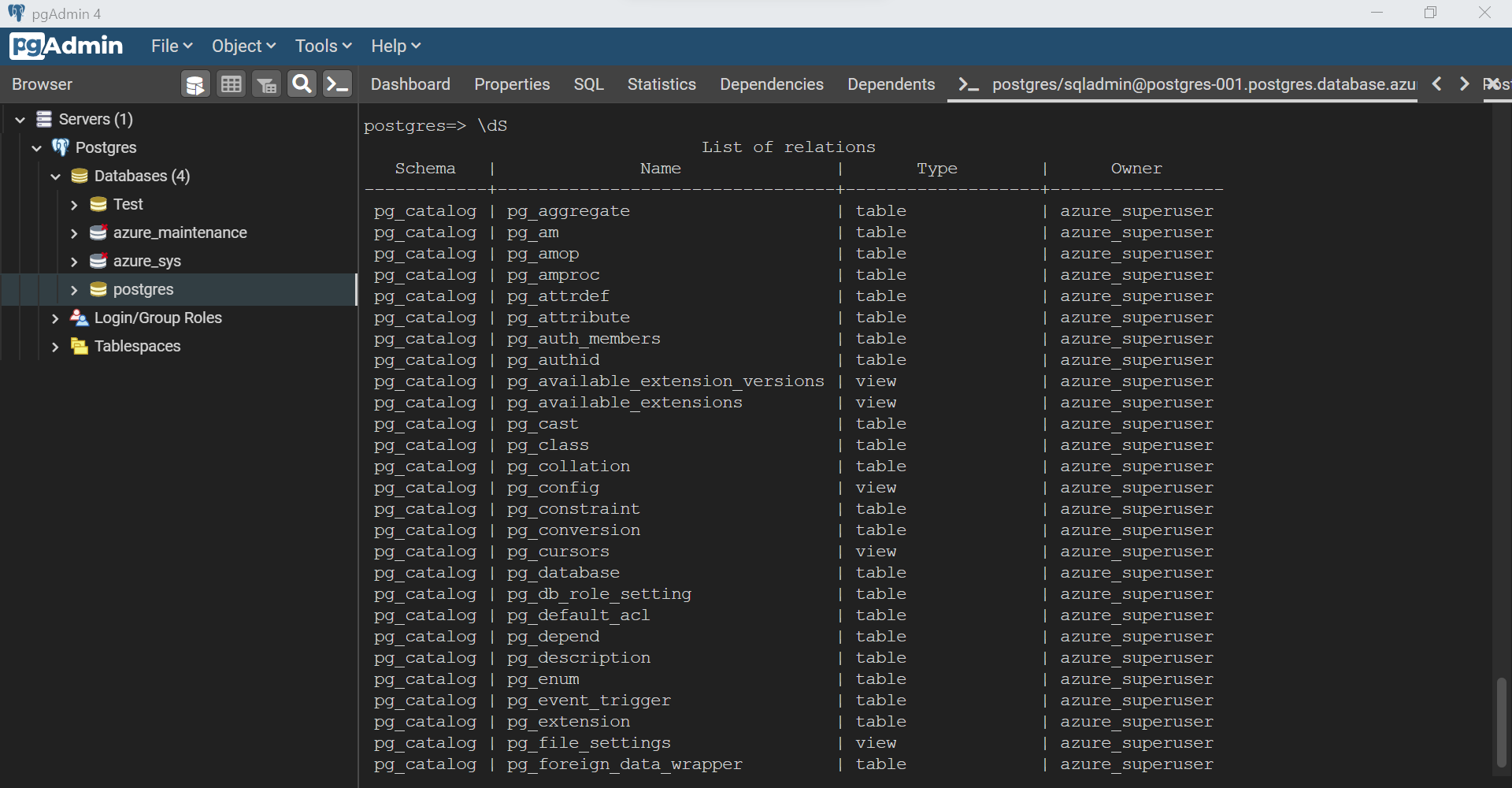 Now let’s query the table to view the data. Here we already have a small table with a few fields and records in it. We can type the SQL query directly on the psql console, and the result would look as shown below. Keep in view to add a semi-colon after the query. As we can see, the psql console acts as a query terminal for querying the data out of the database instance of Azure Database for PostgreSQL.

Now that we know how to explore the database objects and query the data using the psql tool, now it’s time to export the results of the query to a file locally. We can use the SQL query as it is and append the “\g” argument and specify the file path where we want to result to be exported. In this case, the output of the query would be stored in the file instead of being shown on the terminal window.

Navigate to the file path and open the file, and the results would look as shown below.

In this way, we can use the psql terminal to list database objects, query the data from an instance of Azure Database for PostgreSQL as well as export the results of the query to a local file.