In this article, we will analyze a simple T-SQL query execution plan with different aspects. This will help us to improve our practical skills instead of discussing theoretical knowledge.

The execution plan is a very significant point to figure out what is going on behind the query execution process. For this reason, if we want to boost the performance of a query in which we experience poor performance, we need to understand clearly what this guide tells us. In fact, execution plans are an output of the query optimizer, so we’ll try to understand how the query optimizer behaves. Firstly, let’s go over some of the main concepts that will be used in this article.

What is Transact-SQL (T-SQL)?

SQL stands for Structured Query Language and is designed to query the database system, and it is also compliant with the ANSI standard. However, Transact-SQL (T-SQL) is an advanced form of the SQL language that is particularly used to query Microsoft SQL databases.

What is a query optimizer?

The query optimizer is a very crucial component of the database engine that analyzes queries and tries to generate effective (optimal) execution plans. Every executed query will consume resources, such as I/O, CPU, Memory. The optimizer calculates the estimated cost of these resources and chooses an optimum query plan based on this calculation.

What is an Execution Plan?

The execution plan can be thought of as a flight data recorder that tells us the execution details of a query. The actual execution plan generated after a query includes detailed information about the runtime metrics. On the other hand, a query optimizer can create a query plan based on the estimation method, and this query plan is called an Estimated Execution Plan.

How to display an execution plan?

After the execution of the query, we can see the actual execution plan. 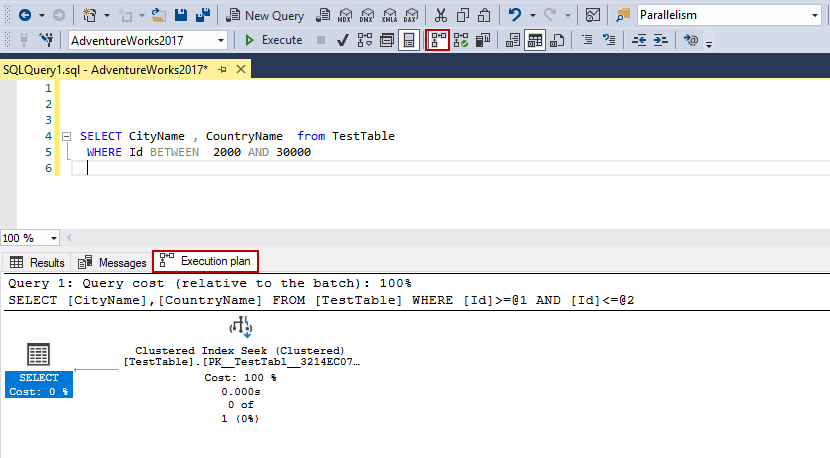 In this article, we will use a very simple table that can be created through the following T-SQL query.

I used ApexSQL Generate to generate 1M test data for this table, and it only takes 2.27 seconds. 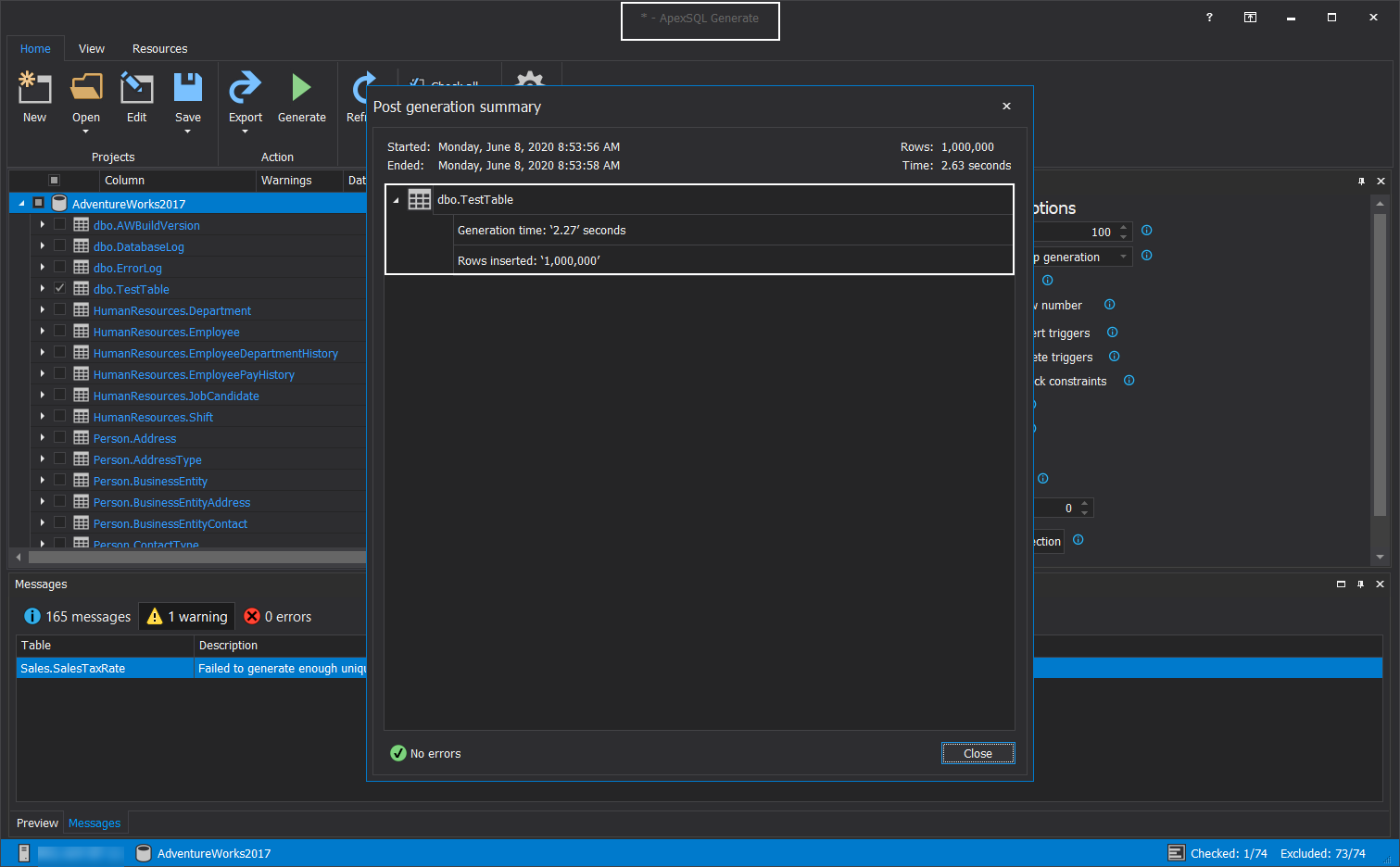 When we hover over the clustered index seek operator, a pop-up form will appear that involves detailed information about the index seek operator. In this form, the Number of Rows Read property indicates the total number of the rows which are read by the operator. 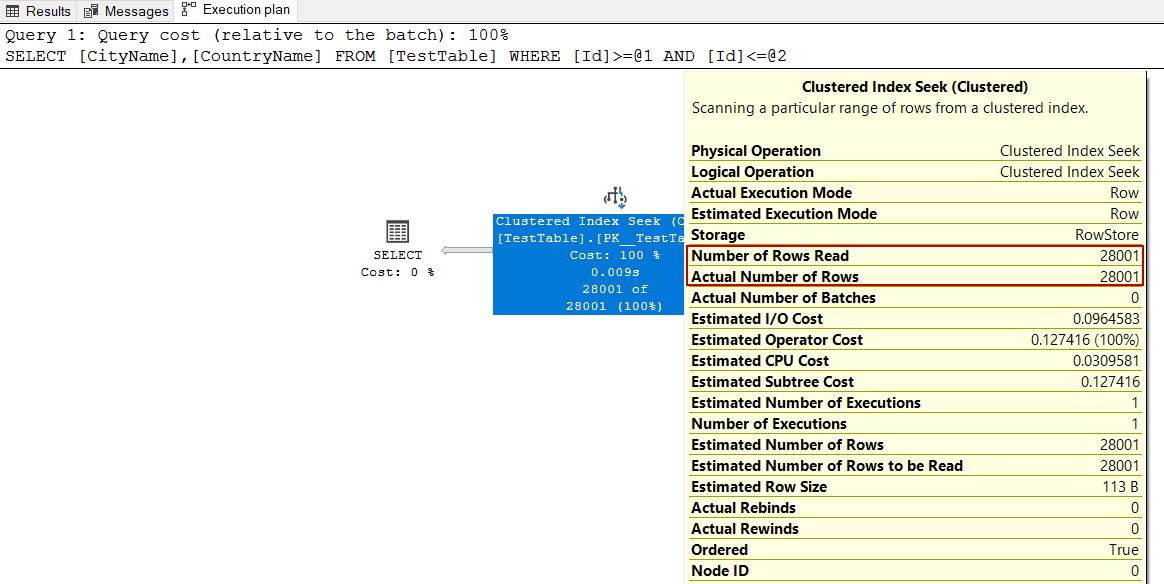 On the other hand, the query optimizer reads all clustered index pages to find the appropriate rows, and this operation is called a clustered index scan. Now we will execute the following query and analyze the execution plan.

When we take a glance at the Number of Rows Read attribute value of the clustered index scan operator, we will see that this operator reads 1M rows, which means it reads the whole rows of the tables, but it only transfers 62000 qualified rows into the next operator.

As a result, we can say that the clustered index scan operator touches every row of the table.

What is a trivial execution plan?

In fact, query optimizer valid reason to create a trivial query plan because it has only one option to use to access the data of the TestTable. However, a trivial plan does not offer any missing index recommendations because it skips some of the query optimization phases. Trace flag 8757 can be used to eliminate trivial execution plan and force the optimizer to complete the full cycle of the query optimization process. Now we will use trace flag 8757 to our example T-SQL query.

What is the Cardinality Estimation?

The query optimizer uses statistics to estimate how many rows are returned from each operator of the query plan. According to this estimation, optimizer calculates the total cost of the (CPU, I/O, Memory) T-SQL query. In this context, the more accurate estimations help to obtain effective query plans for the optimizer. The CardinalityEstimationModelVersion indicates the version of the cardinality estimator. For our example, CardinalityEstimationModelVersion value is 140, and it shows we are executing the query under the SQL Server 2017.

What is the parallel execution plan?

The query optimizer can process a query that requires excessive workload in discrete threads. In this approach, the main idea is to handle more rows in unit time, so it might reduce the query execution time. For our example of the T-SQL query, the query optimizer creates a serial execution plan, but we can force it to create a parallel execution plan with the help of the ENABLE_PARALLEL_PLAN_PREFERENCE hint.

In the above image, we can see that how many rows have been read by each thread. The Gather Stream operator merges all these multiple thread inputs into the single output.

As we stated, the execution plan includes too much information about the query execution backstage. When we observe the select operator of the sample query, we will see an OptimizerStatsUsage property. When we expand it, we can see which statistics are used by the optimizer.

The LastUpdate property shows when statistics were last updated, and SamplingPercent indicates how many percents of rows of data are using to create histograms. When we update statistics with the FULLSCAN option, it computes statistics by searching all rows in the table.

Now, we will execute the sample query again and analyze the execution plan.

As we can see, the SamplingPercent attribute value has changed after updating the statistics.