In this article, we’ll present a couple of common best practices regarding the performance of Integration Services (SSIS) packages. These are general guidelines for package design and development which guarantee a good performance in most use cases. However, there are always exceptional cases and outliers. The mantra of “measure twice, cut once” also applies here. Thoroughly test any changes to your packages to conclude that a change made a positive effect. This means not only running the in the designer, but also on the server. Also, this article is not an exhaustive list of all possible performance improvements for SSIS packages. It merely represents a set of best practices that will guide you through the most common development patterns.

#1 Use a SQL statement in the source component

Well, this only applies of course if your source supports SQL. For a flat file, you just need to select the columns you need. The idea behind this statement is that when you write a SQL statement that will already optimize the data for the SSIS data flow:

Whatever you do, don’t use the dropdown box to select a table. There’s no logic you can add, it will select all columns and all rows of the table and it’s actually slower than using a SQL statement (as it uses OPENQUERY behind the scenes). 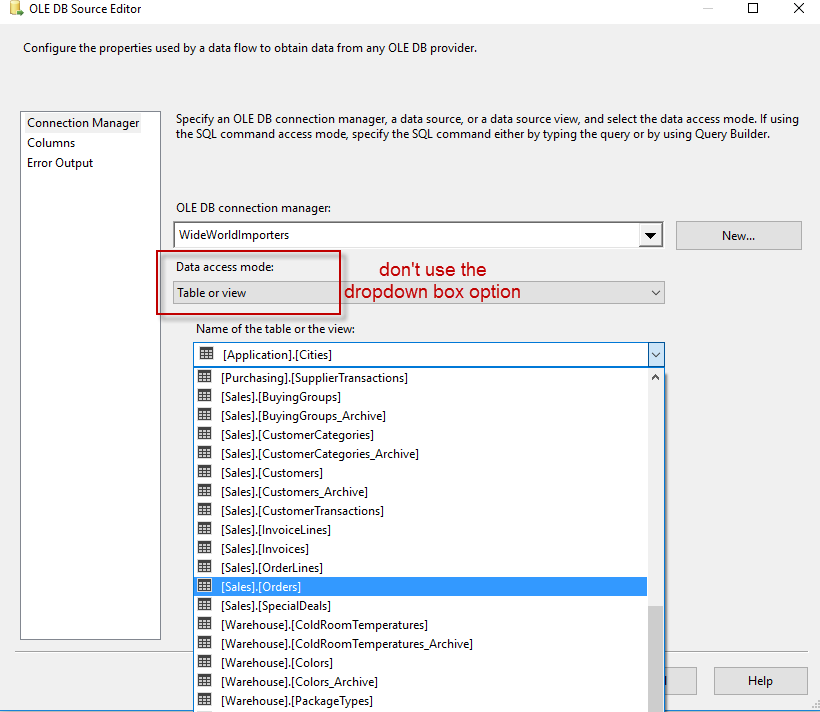 Change the Data Access Mode to SQL Command or SQL Command from variable. The second option is useful if you want to dynamically build your query using expressions.

#2 Get as many rows as you can into a buffer

#3 Don’t use the default buffer settings

While we’re on the topic of buffers, let’s look at some data flow properties:

These two default settings haven’t been changed since the release of SSIS in 2005. Apparently, a time where memory was still crazy expensive. The first thing you’ll want to do is set these properties to a much higher value. There’s no “golden” number that will guarantee optimal performance all the time. Sometimes a smaller buffer is better if the source is really slow, sometimes a bigger buffer is better if you don’t have many columns and a very fast source. Keep in mind that buffers can be too big as well. Think about the line of people passing buckets. If the buckets are too big, it takes too long to fill them with water and the fire still rages on. In reality, it takes some testing to find the optimal settings for your data flow. Typically I run my package first with the default settings and I monitor the execution time. Then I enlarge the buffers – to 30MB and 50,000 rows for example – and see what effect it has. And then I try to determine if the package is better off with even larger buffers, or if they need to be a bit smaller.

Luckily, all this testing can now largely be avoided by one new property introduced in SQL Server 2016: AutoAdjustBufferSize. When this property is set to True, it will automatically adjust the size of the buffer so that the DefaultBufferMaxRows setting is met. For example, if you have set it to 40,000 rows, the data flow will automatically scale the buffer size so that the buffers will contain 40,000 rows. Unfortunately, this property is set to False by default.

In conclusion, make those buffers bigger. This can really have a drastic impact on the performance.

Even if you followed the previous tips to the letter, performance can still be terrible if you use a blocking transformation. These are the types of transformations in a data flow:

The rule is simple: avoid asynchronous transformations. In most cases, these are blocking anyway. The Union All has the benefit of the doubt: it’s the least bad asynchronous transformation. However, if you can design your package so you can avoid it, it’s recommended that you do. The Merge and Merge Join are to be avoided as well, because they require sorted input. You can sort in the data flow, but the Sort component is a blocking transformation, so it needs to be avoided. An alternative is to sort in the source component, for example by adding an ORDER BY clause to the SQL statement. The data flow needs to know the data is sorted though. You can do this by setting the IsSorted property to true on the output in the Advanced Editor (to open the advanced editor, right-click on the source and select it from the context menu). 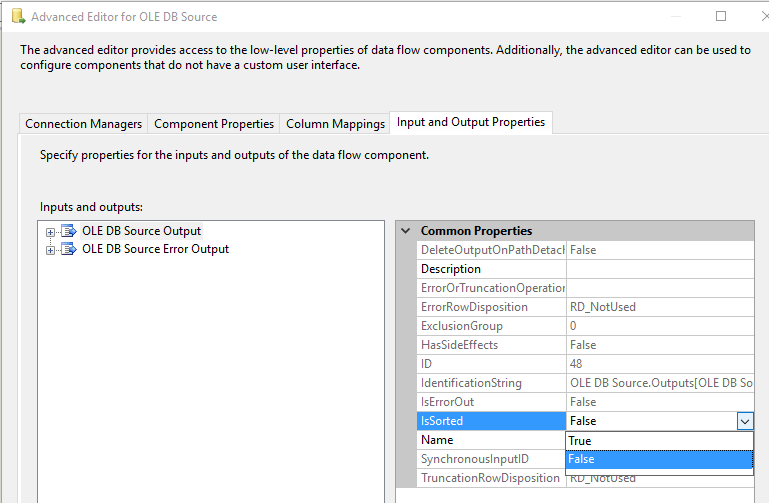 You also need to indicate which columns are sorted. Keep in mind that this doesn’t sort the data for you! This is just metadata information. 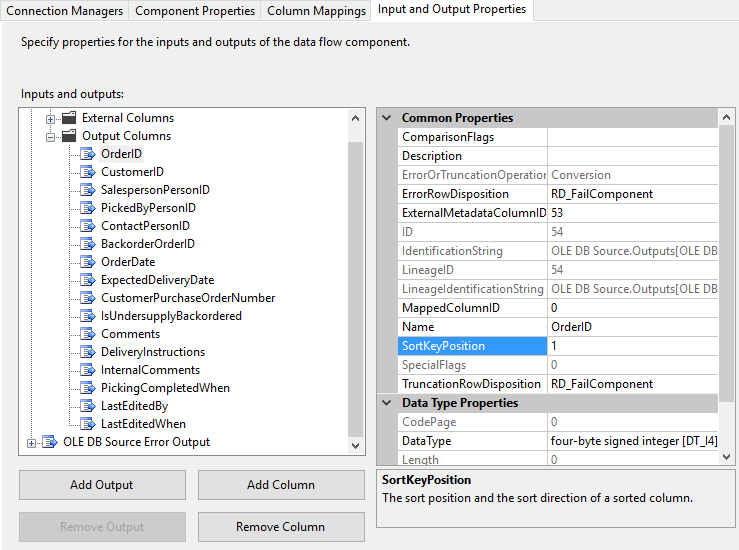 Don’t use it. Ever. Unless you have really small data sets and you’re 100% sure they won’t grow. The OLE DB command executes the SQL statement for every row in the buffer. This means if 1 million rows pass through the transformation, the SSIS package will sent 1 million SQL statements to the server. Most likely the transaction log will blow up and it might even fill your disks completely.