Debugging is one of the most important but painful parts of any software process. To find some errors you have to run the code step by step to see which section of the code is responsible for the error. This is called runtime debugging.

Luckily, SQL Server Management Studio (SSMS) comes with automated debugging capabilities to help developers debug their scripts. In this article, we will explain practically how SSMS can be used to debug stored procedures in SQL Server by working through a very simple example.

For our example, we will use a stored procedure “spShowOddNumbers” that takes two numbers as its parameters and prints all the odd numbers between those two specified numbers.

The script that calls the stored procedure in SQL Server:

In SQL Server Management Studio, you have a variety of debugging options.

To start debugging a SQL server stored procedure in SQL Server, press ALT + F5, or go to Debug -> Start Debugging, as shown in the figure below:

After starting the debugger in the window where you are calling your stored procedure in SQL Server, you will see that there will be a yellow cursor at the start of the query window as shown below:

Now you have started debugging you can step through the code.

There are three options to step through the code: 1) Step Over, 2) Step Into and 3) Step Out. You can see these options by clicking Debug as shown in the screenshot below: 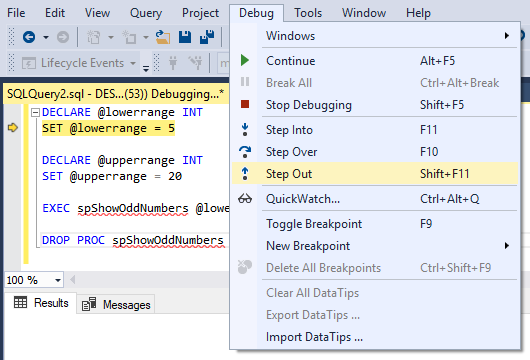 Debugging options execute one line at a time. If there is a loop or a long piece of code that you want your debugger to skip, you can use the ‘Run To Cursor’ option. 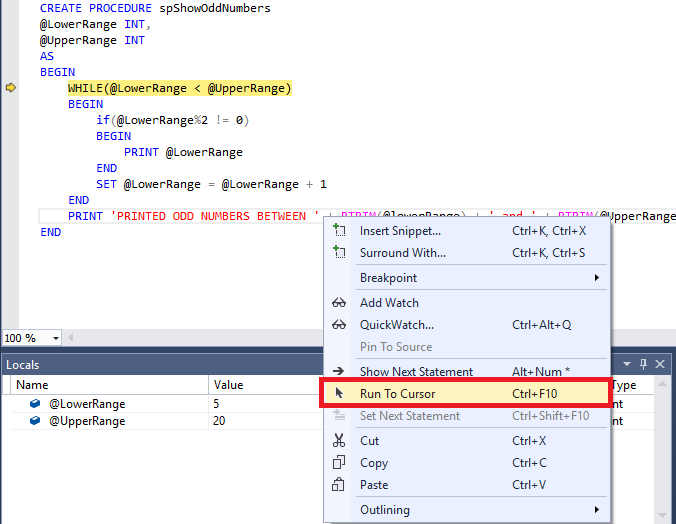 The loop will be skipped and your cursor will now point at the print statement. 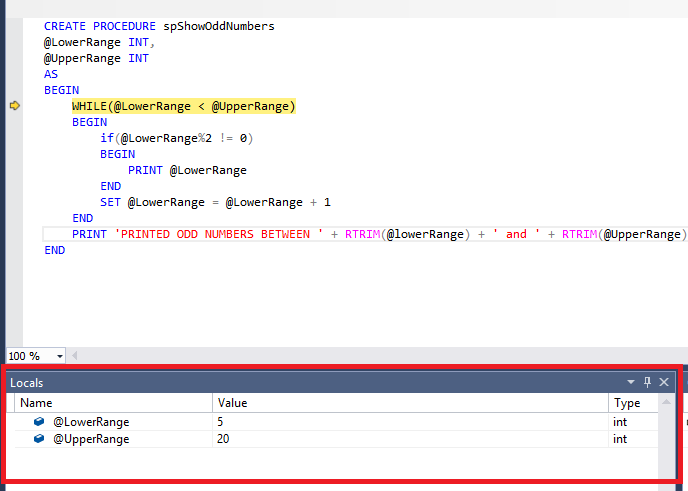 If you close the Locals window accidentally and you want to bring it back, you can simply go to Debug -> Windows -> Locals as shown below:

The Watch window is very similar to the Locals window. The only difference is that you can add to or remove variables from the Watch window, which can be useful when working with large numbers of variables in larger scripts.

To add a variable to the Watch window, simply select the variable, right click and then select “Add Watch” as shown in the following screenshot: 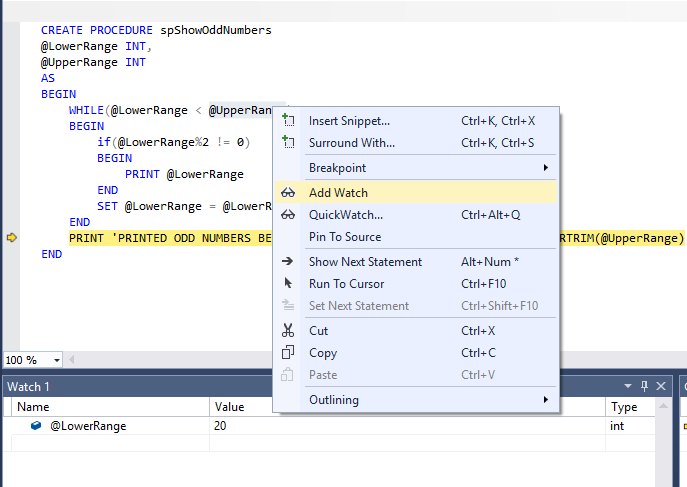 Similarly, to remove a variable, right-click the name of the variable in the Watch window and click “Delete Watch” from the list of options. As shown below:

The Call Stack, as the name suggests, displays the stack of calls that have been executed up to the current point.

A breakpoint is one of the most commonly used debugging tools in any programming language. Breakpoint lets you specify the location where you want your debugger to stop executing the code. They come particularly in handy when you don’t want to debug all the lines of code, rather you want to check the status of variables at specific locations in your code.

To put a breakpoint in your code, simply right click on the grey area to the left side of the line of the script where you want to put your breakpoint. Alternatively, pressing F9 will automatically add a breakpoint to the line. Pressing the F9 key again will remove the breakpoint.

You can see in the figure above, that a breakpoint has been added to the line that executes the “spShowOddNumbers” stored procedure in SQL Server. Now, debug this script. You will see that the debugger will start at first line of the script.

Now press ALT + F5 or go to the debug menu again and click Debug -> Continue. You will see that instead of debugging the next line, the debugger will jump straight to the nearest line with the breakpoint.

To specify a condition on the breakpoint, simply right click the breakpoint and select “Conditions” as shown in the figure below:

A new window will be opened where you can specify the conditions to be satisfied before a breakpoint can hit. If you want this breakpoint to only be hit when @LowerRange is greater than 15, you could add this as condition, as shown in the image below:

In this article, we discussed what different options does Microsoft SQL Server Management Studio provides for debugging a script or stored procedure in SQL Server.