Create a linked server to an Azure SQL database via SSMS

To create a linked server via SSMS, go to Object Explorer under the Server Objects folder, right click on the Linked Servers folder and from the context menu choose the New Linked Server command: 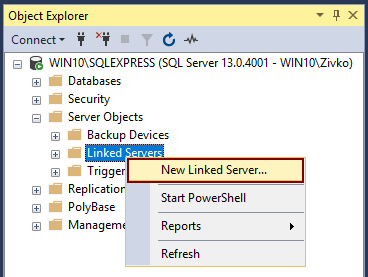 The New Linked Server window will be opened: 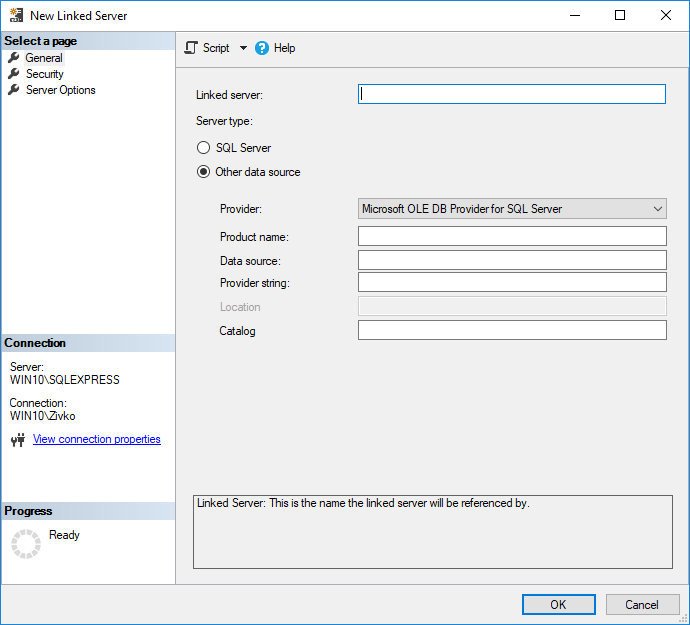 In this window, the first thing that needs to be done is to enter a name for a linked server in the Linked server box and to choose the server type by clicking the SQL Server or Other data source radio button under the General tab.

Let’s first choose the SQL Server radio button under the Server type section and see what will happen. Also, on the General tab in the Linked server box, enter the name of the Azure SQL server for which a linked server is created: 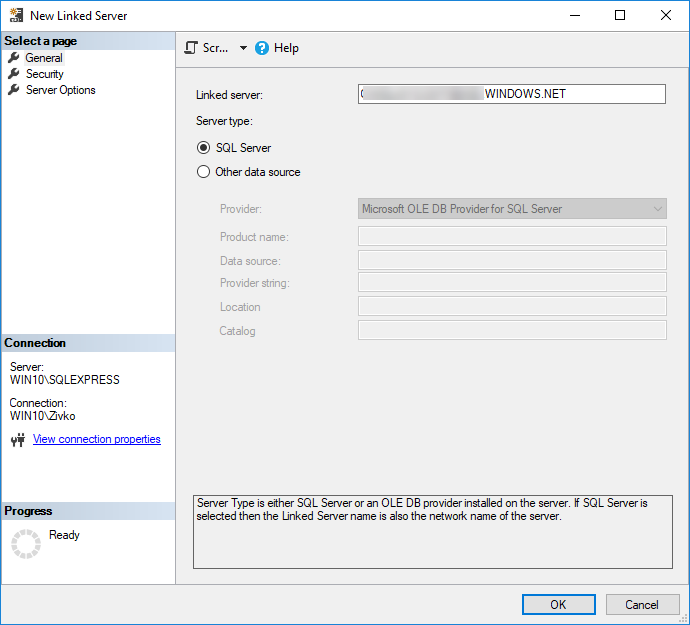 Under the Security tab, select the Be made using this security context radio button and enter user credentials that exist on Azure server: 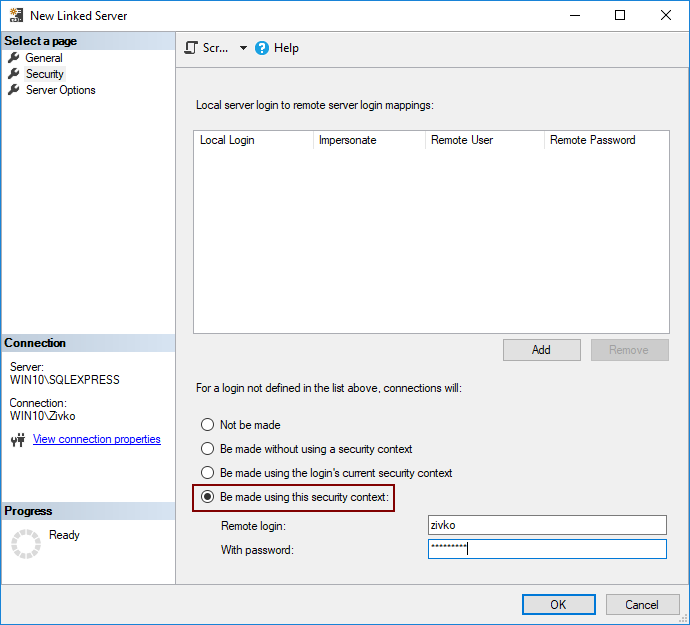 More about the Security and Server Options tab can be found on the How to create and configure a linked server in SQL Server Management Studio article.

After entering the user credentials, press the OK button to create a linked server to an Azure SQL database. Now, under the Linked Servers folder, Azure linked server that we created will appear and in the Catalogs folder, all available databases will be listed:

But, when expanding a particular database (e.g.TestDatabase) is needed in order to see tables of the database, the following error message will appear:

Failed to retrieve data for this request. (Microsoft.SqlServer.Management.Sdk.Sfc)

An exception occurred while executing a Transact-SQL statement or batch. (Microsoft.SqlServer.ConnectionInfo)

Reference to database and/or server name in ‘TestDatabase.sys.sp_tables_rowset2’ is not supported in this version of SQL Server. (Microsoft SQL Server, Error: 40515)

This error occurs because Azure does not allow to alter the master database. To resolve this, you need to connect directly to the Azure database you are going to use.

Delete the SQL Azure linked server that we created and create a new one:

This time, under the Server type section of the General tab, choose the Other data source radio button. The name for the linked server in the Linked server text box can be, this time, whatever you like (e.g. AZURE SQL DATABASE). Under the Provider drop down box, choose the Microsoft OLE DB Provider SQL Server item. In the Data source text box, enter the name of the SQL Azure (e.g. server.database.windows.net). The most important setting in order to correctly create a linked server to an Azure SQL database is to enter the name in the Catalog text box (e.g. TestDatabase) of an Azure SQL database for which you want to create a linked server to an Azure SQL database. Otherwise, if this field is left empty, we will encounter the same 40515 error when trying to get a list of the tables under the Catalogs folder. 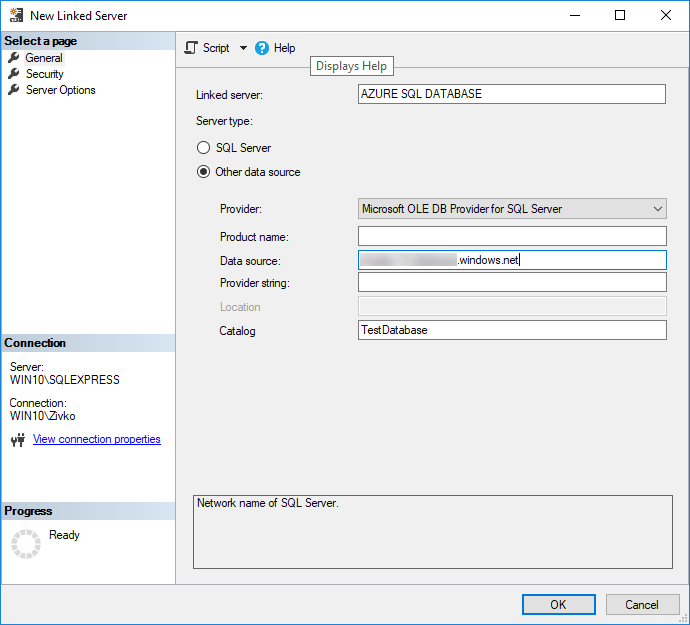 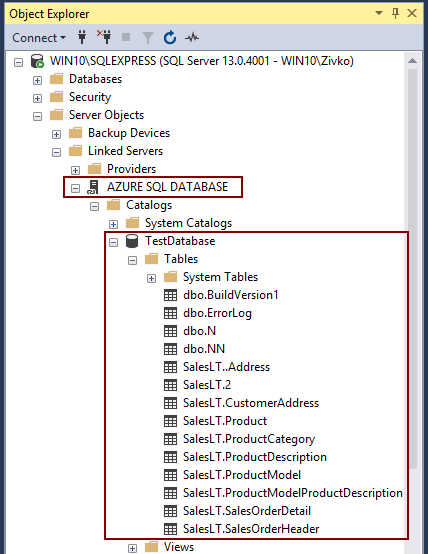 If everything goes well, the data from the CustomerAddress table will appear in the Results grid:

Now, if you try to execute a stored procedure from the AZURE SQL DATABASE linked server, the following message may appear:

To fix that, right click on the AZURE SQL DATABASE linked server, choose the Properties options: 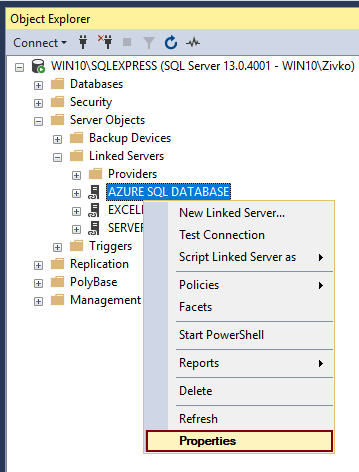 Under the Server Options tab, set the RPC and RPC Out options to True: 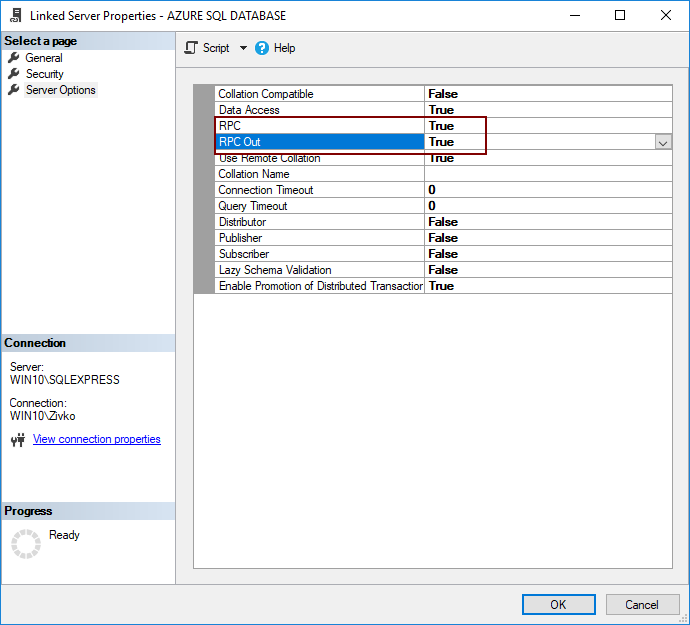 Or in a query editor, paste and execute the following code:

The OPENQUERY function can be used to get data from the linked server by executing code like this:

The results will be the same as from the example above.

This function can be used in the FROM clause of the INSERT, SELECT, DELETE or UPDATE statement.

In order to create a linked server to an Azure SQL database, type the following code in a query editor:

More about how to set linked server by using T-SQL can be found on the How to create, configure and drop a SQL Server linked server using Transact-SQL page

To connect to Azure SQL database and access data without creating a linked server first, use the T-SQL OPENROWSET or OPENDATASOURCE functions.

To open a connection and querying data from the Azure SQL database using the OPENROWSET function, type the following code in a query editor:

If, for some reasons, the above code does not work, use the code below to connect and query data from Azure SQL database:

Another way of connecting and querying data from the Azure SQL database is by using the OPENDATASOURCE function.

In a query editor, paste and execute one of the following codes:

Common error that may occur when using the T-SQL OPENROWSET and OPENDATASOURCE functions: