A secured database environment requires an authorization process in order to provide information access to its users. The same applies to a SQL Server instance.

The authorization/login process can either be successful or no. Even the both login outcomes are security related and should be documented (audited), the focus should be on the failed logins. These can be a result of accidentally mistyped username/password, expired credentials, or insufficient permissions. However, failed logins can also indicate malicious attempts to access confidential data hosted on SQL Server instances.

SQL Server provides several native methods for auditing failed logins. Some of them are easy to set up, others provide more details than the others. They all have in common that the audited information is difficult to review.

One of the options to audit failed logins is to turn on the appropriate option in SQL Server in the Server Properties dialog (the Security node) of a SQL Server instance in Object Explorer. 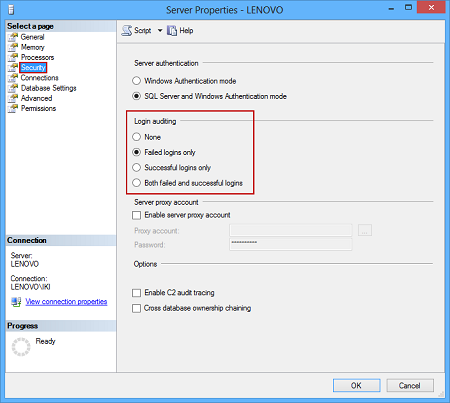 The setting is on the instance level. The SQL Server instance must be running to capture failed logins. Otherwise, there will be no information available. This applies to all SQL Server native auditing techniques.

Once the option is set, failed logins are captured in SQL Server log files and shown in the Log File Viewer of SQL Server Management Studio. These files can be queried using an undocumented xp_readerrorlog extended stored procedure.

Additionally, captured failed logins can be reviewed using the Windows event viewer, in the Application sub-node of the Windows Logs node.

Even this auditing method is easy to set up, there are numerous downsides that make it inappropriate for usage. The main issue is related to native log files. They get recycled and are difficult to be saved automatically for later use. Also, whether the logs are reviewed using built-in viewers or queried, they contain numerous entries not related to failed logins and this noise is difficult to remove.

SQL Server traces and Profiler can also be used for auditing failed logins, but as the feature is announced to be deprecated in future versions of SQL Server, it’s not recommended to use this approach moving forward.

The Audit feature in SQL Server is built on top of Extended Events. It’s the technology that will be additionally developed and expanded in future SQL Server versions. It was introduced in SQL Server 2008 and can be used on both instance and database level. Failed login auditing belongs to the instance level. Therefore, the limitation reflected in supporting database level auditing in the Enterprise and Developer editions only, does not affect our intention to audit failed logins using any SQL Server edition.

To declare the audit object:

To declare the server audit specification for auditing failed logins and tie it to the previously created audit object:

Over time, the number of entries in the logs can increase and basic available filtering in Log File Viewer cannot be useful. To overcome this, the information about failed logins in log files can be queried:

The LGIF value, as the condition, is used to filter out all failed logins from all logs in the specified folder, whether they contain failed logins only or not (e.g. the C:\AUDITs folder is used by other audit objects). Additionally, you can modify the query per your needs.

A downside of tracking failed logins via SQL Server Audit is that it does not provide the names of client applications used. In some cases, this information can be essential in locating the source of malicious login attempts.

To audit a client application name along with each failed login, use an Extended Events session.

Extended Events sessions can be set and used to capture failed logins as errors of Severity 14. Moreover, starting from SQL Server 2012, failed logins can be precisely pointed as the ones with the 18456 error number.

To set up an Extended Events session:

To review the auditing information of the session, expand the session node and select the View Target Data option in the context menu of an event_file node. 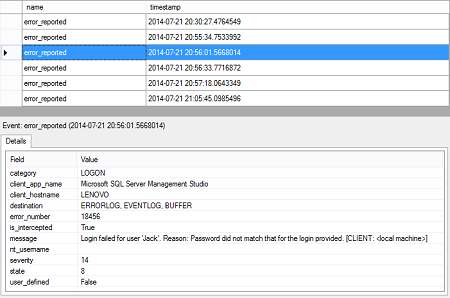 The application used to unsuccessfully login to the SQL Server instance audited is shown in the client_name_application field.