In this article, we will learn how to interpret an execution plan of a SQL Server insert statement.

As we just mentioned above, execution plans are very helpful to understand what is going on behind the scenes during the execution of a query. Now, we will take a glance at the straightforward insert statement query plan. At first, we create a Product table through the following query.

In order to enable the actual execution plan of the query, we click the Include Actual Execution Plan button on the SQL Server Management Studio (SSMS) tab.

As we can see, the query optimizer generates a very simple execution plan for the insert statement. As a practice, the graphical execution plans can begin to read top to bottom and right to left. However, if we take a glance into the INSERT operator, it gives some general information about the SQL Server insert statement. For example, MemoryGrantInfo attribute gives information on how much memory is used by the query and OptimizerHardwareDependentProperties shows the hardware and configuration settings when generating the execution plan. 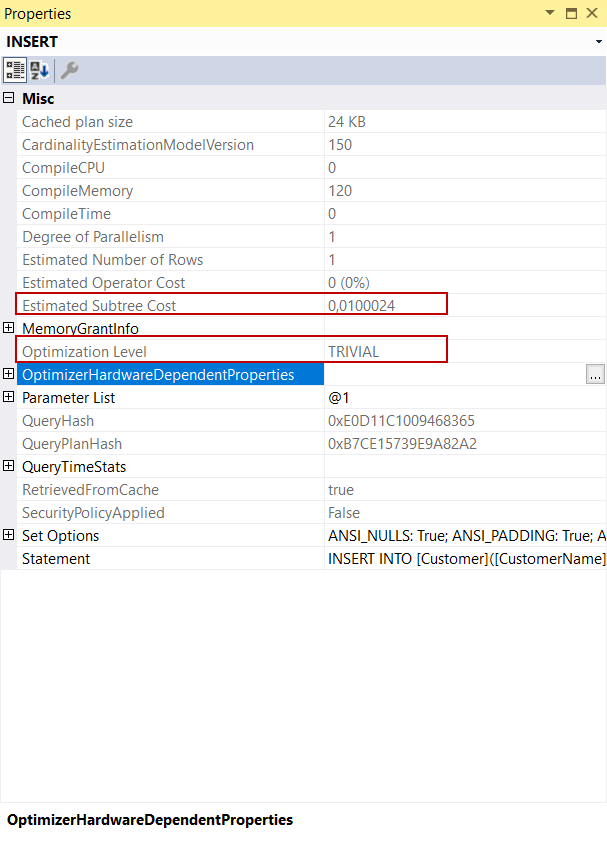 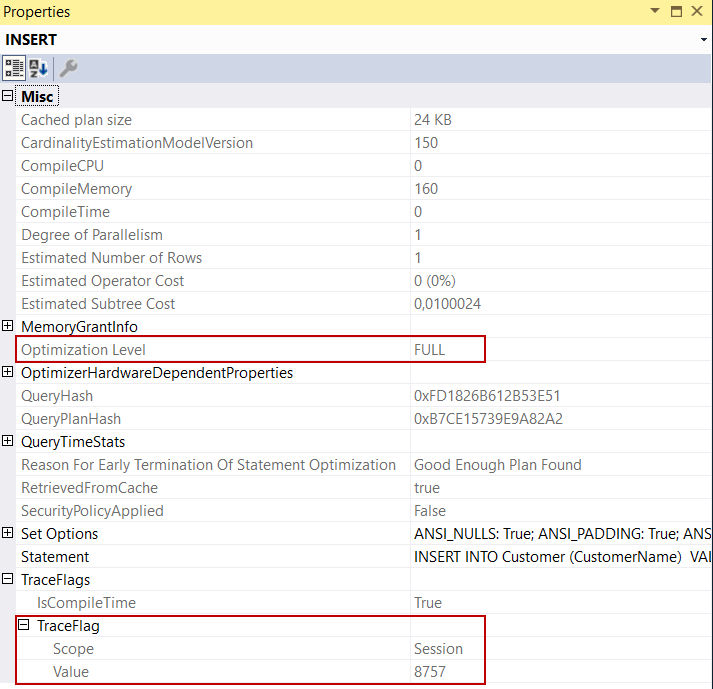 Now let’s try to understand all operator’s tasks on the execution plan beginning from the right to left.

Constant Scan Operator is a very interesting operator because its Output List attribute is empty so we can think it returns nothing to the next operator. However, this case is not completely true because it generates at least one row and passes it into the next operator. This type of row will never be used in the queries, it can only exist in intermediate phases in an execution plan because it has zero columns. When we look at the Actual Number of Rows attribute of the constant scan operator, we can notice this single row. 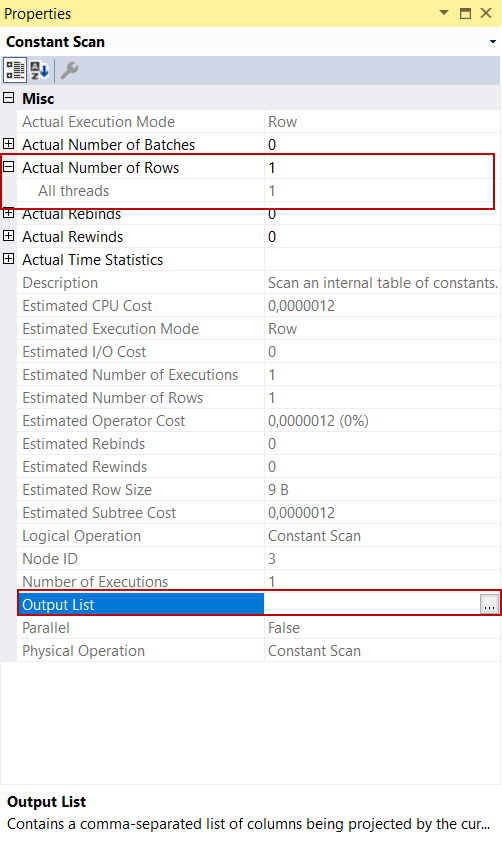 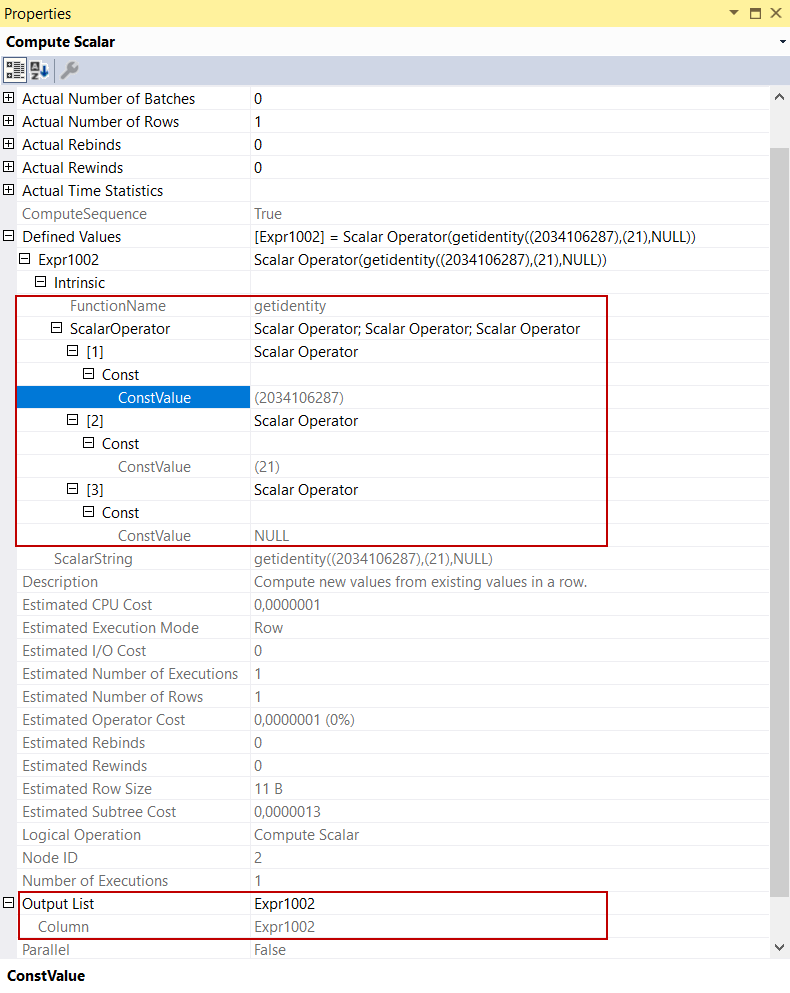 As we can see, the function name is getidentity and it takes 3 different parameters. In the definition of the table, we had declared an identity property for the CustomerId column, for this reason, the getidentity function calculates the next identity value for this column and passes this value to the second compute scalar operator. The first parameter of the getidentity function is the object id of the table. When we inquire about this object id on the sys.objects table, it will return the name of the table and the other ones are also required to find the last identity value.

The Output List attribute shows the Expr1002 column and this column has been added by compute scalar operator.

The query optimizer does not require and second compute scalar operator because it knows the inserted valued data type in the runtime. 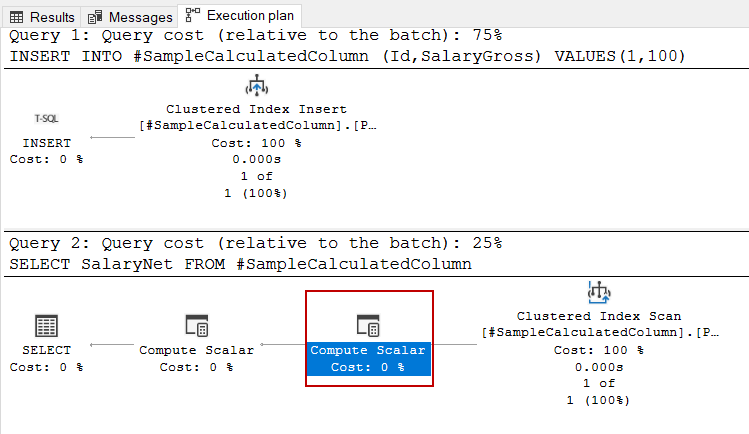 Join Up the Dots

After learning the task of each operator separately, join the parts together and interpret the execution plan.

In this article, we have analyzed an SQL Server insert statement execution plan with all aspects. As we learned, a database engine performs tons of operations when we execute an insert statement.