SQL Server 2017 has been in the talk for its many features that simplify a developer’s life. With the previous versions, developers had to write T-SQL, or user-defined functions using temporary tables, and build complex logic, just for string manipulation. In almost every database I work with, I see many user-defined functions for string manipulation and string aggregation.

This article outlines the basic concepts of how to use the new SQL Server string function in SQL Server 2017 on a Linux machine.

SQL Server 2017 CTP 1.1 contains various SQL string functions out of the box, a few of them being:

As developers, we try to achieve results in simple and smart ways. The SQL Server string functions available in SQL Server 2017 make the life of a developer much simpler.

So, let us get started, and see the usage of the available SQL string functions!

The SQL trim function removes the space character char(32) or other specified characters from the start or end of a string.

As a SQL developer, you must have often come across a scenario where you had to remove the empty spaces at the beginning and the end of strings. To achieve that, you may have used the SQL Server string functions, RTRIM and
LTRIM—you had to use both, because SQL Server does not have a function which can trim leading or trailing spaces of a given string with a single function, even though TRIM() is a very popular function in many languages. The release of SQL Server 2017 comes with this new string function “TRIM”. You can use the SQL TRIM function to get rid of the leading and trailing spaces around any given string.

Let us consider an example string, from which we have to remove the leading and trailing spaces:
‘   SQLShack   ’

The TRANSLATE SQL string function allows us to perform a one-to-one, single-character substitution in a string. Until SQL Server 2016, we used use REPLACE function to replace each character or write UDF function.

Let us consider the following example:

Replace the special characters in a string with ‘1’

With the TRANSLATE SQL string function, the process becomes much simpler than using REPLACE

Note: The second and third arguments of the built-in SQL string function, TRANSLATE, must contain an equal number of characters.

In the following example, the separator hyphen (–) is used. The CONCAT_WS is similar to the existing CONCAT() function, which was introduced in SQL Server 2012. The function concatenates a number of arguments or string values.

The CONCAT_WS behavior can be emulated using the STUFF and the COALESCE functions in SQL Server.

COALESCE() accepts a series of values along with a value to use in the event that all items in the list are null.

One primary difference is that concat_ws() skips NULL arguments, but + does not. You could emulate this behavior with:

Of course, this doesn’t convert the values to strings, as concat_ws() does. Therefore, a version that’s closer, could be something like:

Using Concat_WS, the entire string manipulation is made very simpler 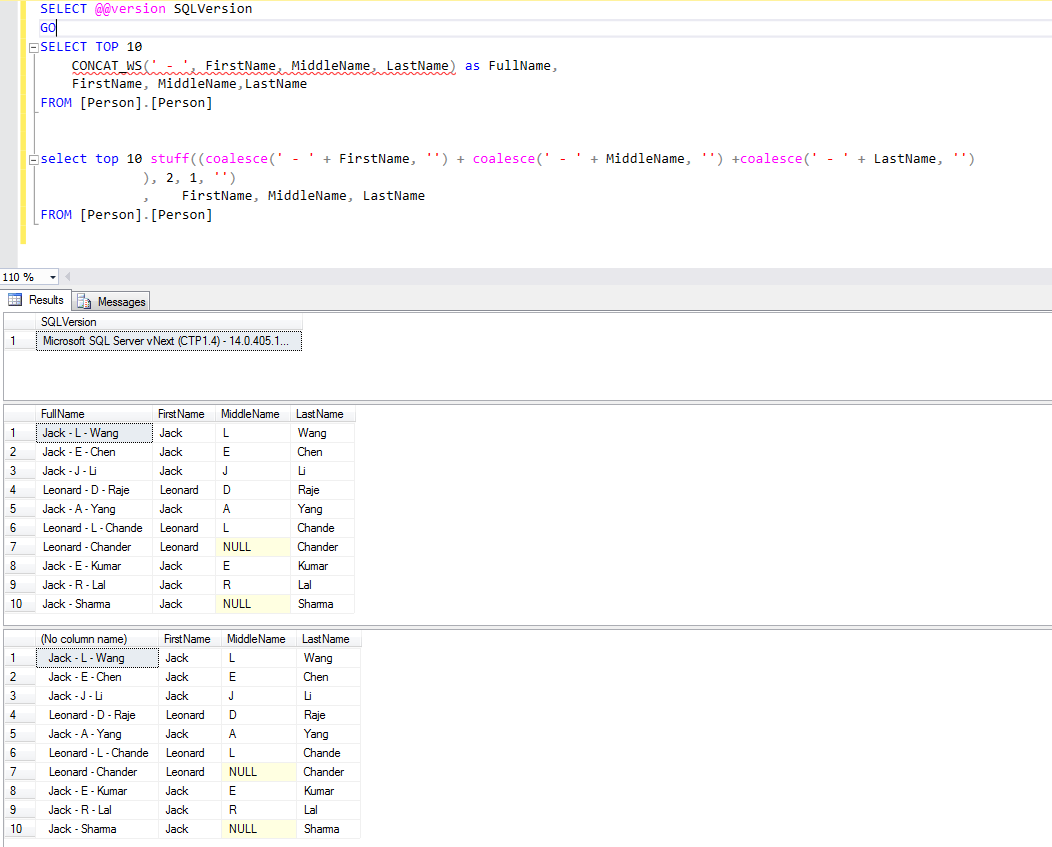 Aggregate functions compute a single result from a set of input values. With the prior versions of SQL, string aggregation was possible using T-SQL or CLR, but there was no inbuilt function available for string aggregation, with a separator placed in between the values.

The following example shows how simple it is to group based on the name field, and generate a CSV. The same can be derived using available SQL functions. However, this readily available SQL string function provides a simple interface to string manipulation. 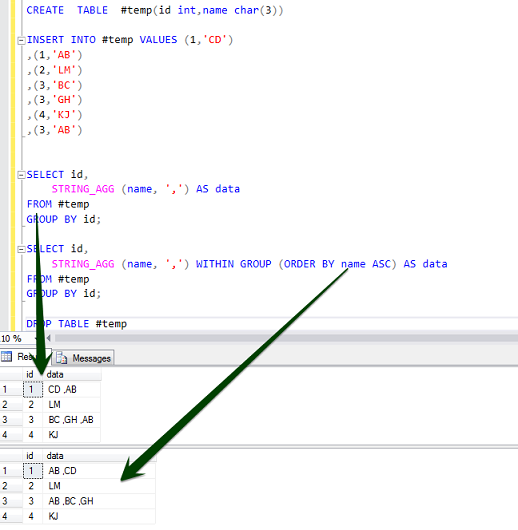 The old way to do this was using a STUFF command along with an XML path statement, which could then show one row of data, with values separated by a comma. While this is achievable, it is rather confusing to read and understand. The new way to do this is by the string aggregate ( STRING_AGG) function as given above. 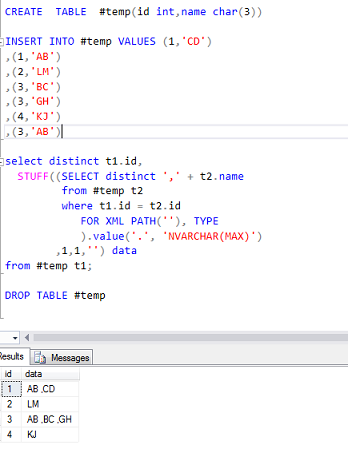 This article outlines the concept of advanced SQL string functions in comparison with the old-school methods of string manipulation.