In this article, we will review the new SQL TRIM function in SQL Server 2017 onwards as well as providing some information on strings functions that pre-date it like LTRIM AND RTRIM.

SQL Developers usually face issueS with spaceS at the beginning and/or end of a character string. We may need to trim leading and trailing characters from a character string. We might need to do string manipulations with SQL functions as well. Suppose we want to remove spaces from the trailing end of a string, we would need to use SQL LTRIM and RTRIM functions until SQL Server 2016.

We use the SQL DATALENGTH() function to calculate data length in bytes before and after using SQL LTRIM function.

It removes characters from the end ((Starting from the right side) of the specified string. Let’s execute the following query to look at the effect of SQL RTRIM function.

In the following screenshot, we can see it removes both leading and trailing space from the string.

We need to use two functions to remove the spaces from the string. We can use a single instance of a TRIM function in SQL Server 2017 onwards to trim both leading and trailing characters, let’s explore the TRIM function in a further section of this article.

The Syntax of the TRIM Function

By default, Trim function removes the space from both sides of a string. In the following query, we have to define a string with space on both sides of the string.

We did not specify any characters to remove in TRIM function. In the output, SQL TRIM function removes both leading and trailing space.

You can also notice the difference in string length before and after the TRIM function.

TRIM Leading characters from a string:

In the previous example, we explored that SQL TRIM is the replacement of RTRIM and LTRIM and it eliminates to delete all space character before and after a string. We can remove the characters as well from the string using TRIM. Suppose we want to remove character ON from the string, we can specify it in TRIM function as per following script.

It checks the specified characters on both the leading and trailing side and removes the particular characters. In the string Application, we have character ON in the leading side. In the following screenshot, you can look at the output after TRIM function.

Let’s look at one more example. This time we want to remove characters App from the leading side. We do not need to make any changes in the script. We can specify the character to remove using SQL TRIM, and it gives the required output.

In previous examples, we removed character either from the leading end or trailing end. If we have a character on both sides, it removes them as well.

In the following example, we want to remove character A that is on both sides of the string. Execute the script, and it removes the specified characters from both sides.

Suppose we have specified a character that is not present on the string. In the following example, we want to remove character A and C from leading or trailing end. We do not have character C on either side, so it does not remove it. It only removes character A and gives the output.

TRIM for records in a table

In the previous article, we used a variable to define a string and perform SQL TRIM operation on it. Usually, we require using TRIM on table records. Let’s use it in the following example.

In the following examples, it eliminated character R from the string at the leading and trailing end. 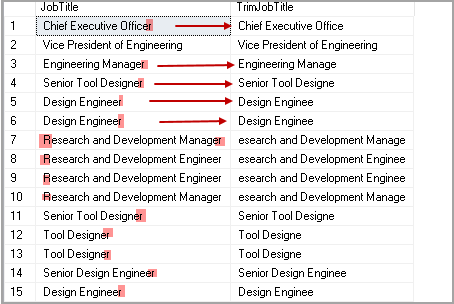 We can use SQL TRIM function in Update statement as well. Suppose we want to update all records in Employee table and want to eliminate characters Manager from JobTitile.

It does not treat the Manager as a single word. Trim function checks for each character in the string and eliminates it.

We can use comma (,) to separate each character as well.

It also does the same work and removes specific characters from the string at a leading and trailing end.

Depending on the version of SQL Server you are using, you should understand these functions and be familiar with the concepts. I hope you find this article useful. Feel free to provide feedback or ask questions in the comments below.