This article explores the uses of the SET PARSEONLY SQL command for SQL Server queries.

Developers write complex and lengthy SQL scripts. The high-level tasks in executing a SQL query are parsed, compile and execute.

For example, it highlights incorrect syntax in the following query.

In case the query contains multiple errors, it lists all error messages along with the line numbers.

Suppose you are writing a complicated script and press F5 by mistake. You must hit the cancel button to stop this execution, but it might have done damages for you. For example, you specified a drop table statement for dropping a few tables, but if it satisfies certain conditions. We want to prevent such accidental query execution.

You might have noticed we use the Go statement for query execution in SQL Server. The Go statement works as a batch separator. SQL Server processes one batch request at a time. We might use multiple batches in a single query session, but these batches are independent of each other.

We can use the PARSEONLY statement in a query batch, and SQL Server does not compile and execute the statement.


Execute the following T-SQL batch, and it completes all phases of a SQL Query, i.e., Parse compiles and execute.

You get the expected output once the query finishes.

We did not get any output for this query.

In this example, we intentionally modified the T-SQL batch so that it gives an error during the parse phase.

We get the error message because the table variable @Emp_new does not exist. This way, the query executes in the parse phase only.

Example 4: Specify PARSEONLY SQL Command with objects that do not exist

In this example, we use a select statement, but the table does not exist. You can see a red line below the object that shows it does not exist in the current database. As stated earlier, SQL Server checks for object existence during the compile phase. We specify SET PARSEONLY ON for skipping the compile and execute phase. Due to this reason, query complete parse phase and do not give any error.

Example 5a: Batch 1 with PARSEONLY statement and Batch 2 without PARSEONLY

It does not report an error in batch 1 (parse only) and returns output for another batch.

In this example, we use the PARSEONLY ON statement but did not turn it off. Once we turn PARSEONLY ON, it disables the compile and executes phase for all batches in the session. Therefore, SQL Server does not execute another batch as well.

Let’s twist the query a little bit. In the following query, We turn on and off PARSEONLY in a single batch. We did not use the Go statement so that SQL Server can understand different batch. Once we execute this query, SQL Server does parse and skips the query execution because PARSEONLY OFF does not have any impact on the current batch.

Look at the below queries. We specify PARSEONLY ON (batch 1) and PARSEONLY OFF (batch 2) statements inside EXEC.

It prints a message for both the batches. PARSEONLY statement does not have any impact in this case.

Now, we add another batch in this session. This batch contains PARSEONLY statement inside the IF statement. Execute these batches once in a new query window of SSMS.

It executes both batch 1 and 2 but parse batch but only parse batch 3 due to specified PARSEONLY statement.

Now, turn off PARSEONLY in the third batch of a similar session and execute the query. 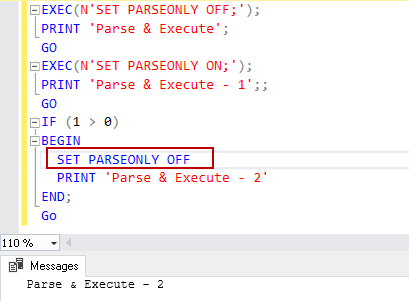 Without making any changes in queries, execute it again, and you get the following output. This time it executes all batches and prints messages. 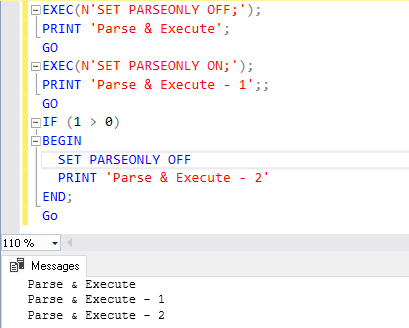 In this article, we explored the uses of the PARSEONLY SQL Command for excluding compile and execute phase of a query. It might be useful for query debugging or test purposes.