One of the paramount ways to guard data within a database is to utilize database encryption. However, no one encryption solution is perfect for all databases. Which encryption solution you select totally depends on the requirements of your application. Note that more powerful encryption for larger amounts of data requires a healthy amount of CPU. So, be prepared in the event that that introduction of encryption increases the system load.

This article will start with the divergence of hashing and encryption, and give all the details of the HashBytes function used in T-SQL

There are two main methodologies to safeguard your data: hashing and encryption. Encryption is accomplished via one of several different algorithms that return a value that can be decrypted through the correct decryption key. Each of the different encryption options provides you with a different strength of encryption. As I have mentioned earlier, the stronger level of encryption you use, the greater the CPU load on the Microsoft SQL Server.

However, if we can talk about hashing values, we are mainly referring to hashing algorithms. Hashing algorithms provide us a one-way technique that has been used to mask data, in which we have a minimal chance that someone could reverse the hashed value back to the original value. And with hashed techniques, every time you hash the original value you get the same hashed value.

In SQL Server 2012, we have an enhancement in this function and now it supports SHA2_256, SHA2_512 algorithms that can generate 32 and 64 bytes hash codes for the respective input.

Beginning with SQL Server 2016, all algorithms other than SHA2_256, and SHA2_512 are deprecated. Older algorithms (not recommended) will continue working, but they will raise a deprecation event.

The HashBytes function in T-SQL

Hashing can be created, regardless of the algorithm used, via the HashBytes system function. A hash is an essential calculation based on the values of the input, and two inputs that are the same ought to produce the same hash.

The key word in syntax

‘<algorithm>’
In this, we have to initiate the hashing algorithm to be used to hash the input. This is a mandatory field with no default. And its also requires a single quotation mark. Starting with SQL Server 2016, all algorithms other than SHA2_256, and SHA2_512 are deprecated. Older algorithms (not recommended) will continue working, but they will raise a deprecation event.

@input
In this, we have to specify a variable that contains the data to be hashed. @input is varchar, nvarchar, or varbinary.

‘input’
this specifies an expression that evaluates to a character or binary string to be hashed.

The below image depicts all supported algorithms with their respective lengths

The HashBytes function accepts two values: the algorithm to use and the value to get the hash for.

The HashBytes system function does not support all data types that Microsoft SQL Server supports before SQL server 2016. The biggest problem with this lack of support is that the HashBytes function doesn’t support character strings longer than 8000 bytes (For SQL Server 2014 and earlier, allowed input values are limited to 8000 bytes.)

I will now explain the HashBytes function as it existed before 2014, not allowing large string in SQL Server and its solution.

Let’s quickly look at the example.

The above code will throw the exception “String or binary data would be truncated.” as shown below:

To overcome the limitation, I have come up with a solution, a SQL function, to break down the string into multiple sub-parts and apply the hashing separately and later re-constitute them back into a single string

The script is as below:

Now we execute scripts and the error has vanished.

Checking and storing Passwords with Encryption

First of all, we have to make sure that the field or column we have used to preserve password for store the hash code is of data type varbinary. Then, use the HashBytes function in the insert statement to generate the hash for the password and store it in the column. Below is the salient example of storing a password in hash code with SHA2 512 algorithm and comparing the hash-coded password in a select statement.

We should review some gray areas before uses it.

Second, the column definition, if we used same data type but the length is different, then there should be the same result. To elaborate in depth, review below example of VARCHAR(50) and VARCHAR(100), we can test the output: 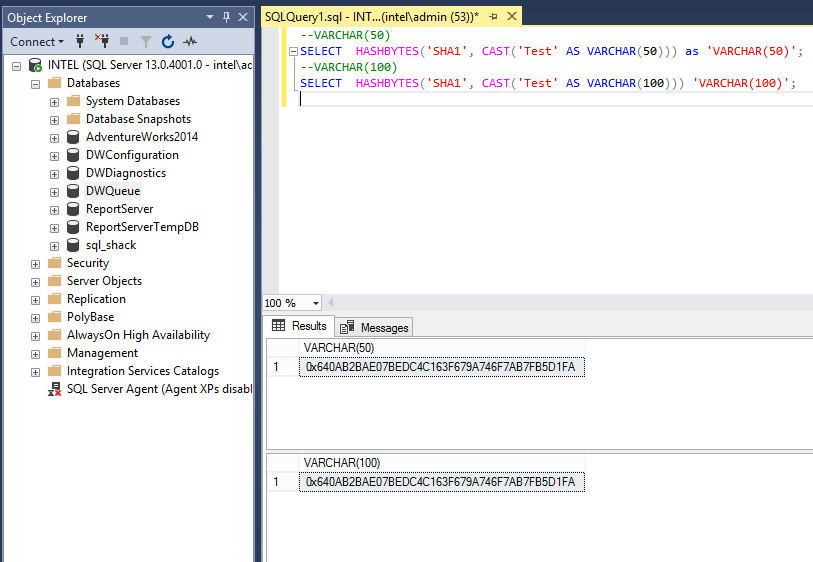 Both SELECT statements return the similar hashes value such as below:

However, although, it has a similar data type, one should be aware that VARCHAR and NVARCHAR will not produce the same HashBytes value, even with the same string. To illustrate, review the following select statements. 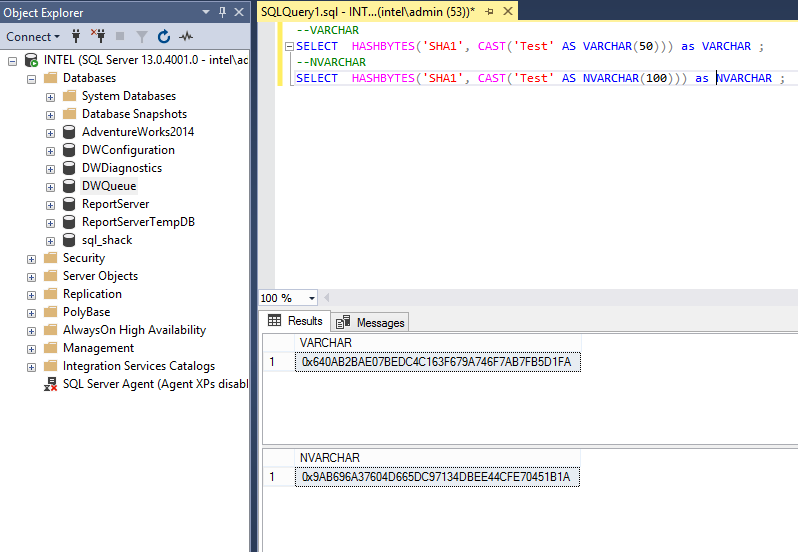 It can be noted that collations are only reviewed when we compare values between two files. The reason why the n[var]char produces a different result because it’s two bytes per character whilst the[var]char is a single byte per character.

For further understating, HashBytes, as the name implies, hashes a set of bytes, and so the two inputs return different results.

After reviewing all the points elaborated above it can be said that, there should be another hash for the similar values by using different algorithms.

Furthermore, it can be easily seen if something has changed while comparing the same string to itself if hashes algorithm is different than it is the exception. Especially, I prefer to use it for password protection, so, one can hash a password in the database table and then have the user enter their own version, hash it, and compare the results. In this way, the system end (front end) never knows the value. Just make sure to double check you have used same the same algorithm

Nikhilesh Patel
Nikhilesh Patel is a database professional having 7+ years of experience. Most of his vocation focuses on database design, development, administration, performance tuning and optimization (both SQL Server and Oracle). He has collaborated with SQL Server 2000/2005/2008/2012/2014/2016, Oracle and PostgreSQL databases. He has fabricated and developed databases for insurance, telecom and communication domain. He is a database administrator at HighQ solution. He continuously develops his professional skills to keep accelerating with new technologies.

In his downtime, he enjoys spending time with his family, especially with his wife. On the top of that, he loves to do wondering and exploring different places.

Say hi and catch him on LinkedIn