The SQL While loop is used to repeatedly execute a certain piece of SQL script.

This article covers some of the basic functionalities of the SQL While loop in Microsoft SQL Server, with the help of examples.

The syntax of the SQL While loop is as follows:

The while loop in SQL begins with the WHILE keyword followed by the condition which returns a Boolean value i.e. True or False.

The body of the while loop keeps executing unless the condition returns false. The body of a while loop in SQL starts with a BEGIN block and ends with an END block.

A simple example: Printing numbers with SQL While loop

Let’s start with a very simple example where we use a SQL While loop to print the first five positive integer values:

In the script above, we first declare an integer type variable @count and set its value to 5.

Inserting records with SQL While loop

Let’s now see how the SQL While loop is used to insert dummy records in a database table.

For this we need a simple database “CarShop”:

We will create one table i.e. Cars within the CarShop database. The Cars table will have three columns Id, Name and Price. Execute the following script:

Let’s now use the While loop in SQL to insert 10 records in the Cars table. Execute the following script:

In the script above, we again declare a variable @count and initialize it with 1. Next, a while loop is executed until the value of the @count variable becomes greater than 10, which means that the while loop executes 10 times.

Now if you select all the records from the Cars table with the “SELECT * FROM Cars” query, you should see the following output: 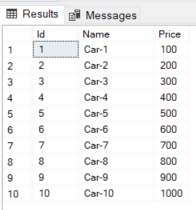 Implementing paging with SQL While loop

The while loop can also be used to implement paging. Paging refers to displaying a subset of records from a data table at any particular time.

In the following script, the while loop will be used to select two records from the Cars table at a time. The selected records are then displayed in the console output:

Inside the while loop, the OFFSET clause is used to skip the first N rows of the Cars table. The FETCH NEXT clause fetches the next N records.

In this way, all the records from the Cars table will be retrieved in sets of two. The output is as follows:

In the output, you can see all the records from the Cars table, printed in sets of two on the console.

The CONTINUE and BREAK statements

The following script shows how to use the CONTINUE statement inside a while loop to print the first five positive even integers:

Otherwise, the value of the @count variable is printed on the console. Here is the output of the above script:

The following example demonstrates the use of a BREAK statement. The while loop in the following script will terminate after printing the first five integers:

Ben Richardson runs Acuity Training a leading provider of SQL training the UK. It offers a full range of SQL training from introductory courses through to advanced administration and data warehouse training – see here for more details. Acuity has offices in London and Guildford, Surrey. He also blogs occasionally on Acuity’s blog