In this article let’s see how to install a SQL Server Instance using a Docker container in Windows server 2016.

“Containers” is probably one of the hottest buzz words talked about these days in IT world, especially Docker containers. So, what exactly is Docker? Well, Docker is one of the few companies who develops, builds and distributes container technologies. It’s a pioneer in container technologies, similar to VMWare in virtualization technologies. I won’t be going into internals and architecture of how docker container works under the hoods in this article, instead lets just focus on installing docker containers inside windows server 2016 and then setup the latest version of SQL Server Instance on top of it.

One can install dockers in windows 10 (should be enterprise or professional with anniversary update or later and Hyper-V enabled.) or in Windows server 2016, In our case we will be using Windows Server 2016 for this purpose.

In order to install Docker suite, first we have to enable containers feature in windows server 2016 and install Microsoft management package provider for docker. Okay, let’s get into action. To begin with, I created a Windows server 2016 Virtual machine and enabled direct internet access to the VM.

Open server manager and navigate to “Add roles and features” and select “Containers” feature as shown below. 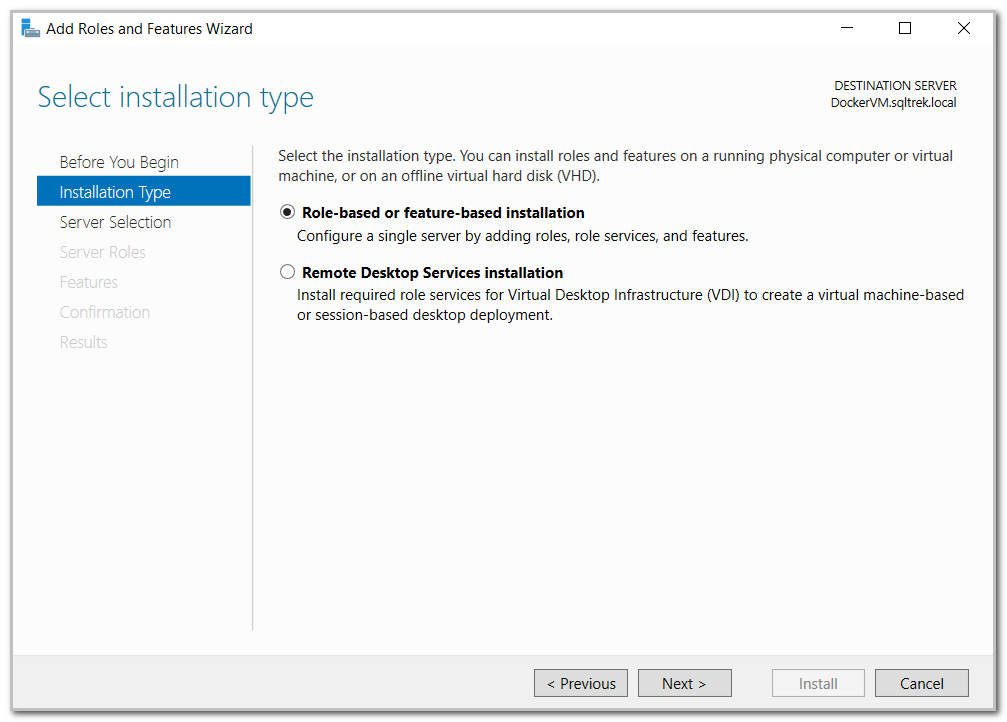 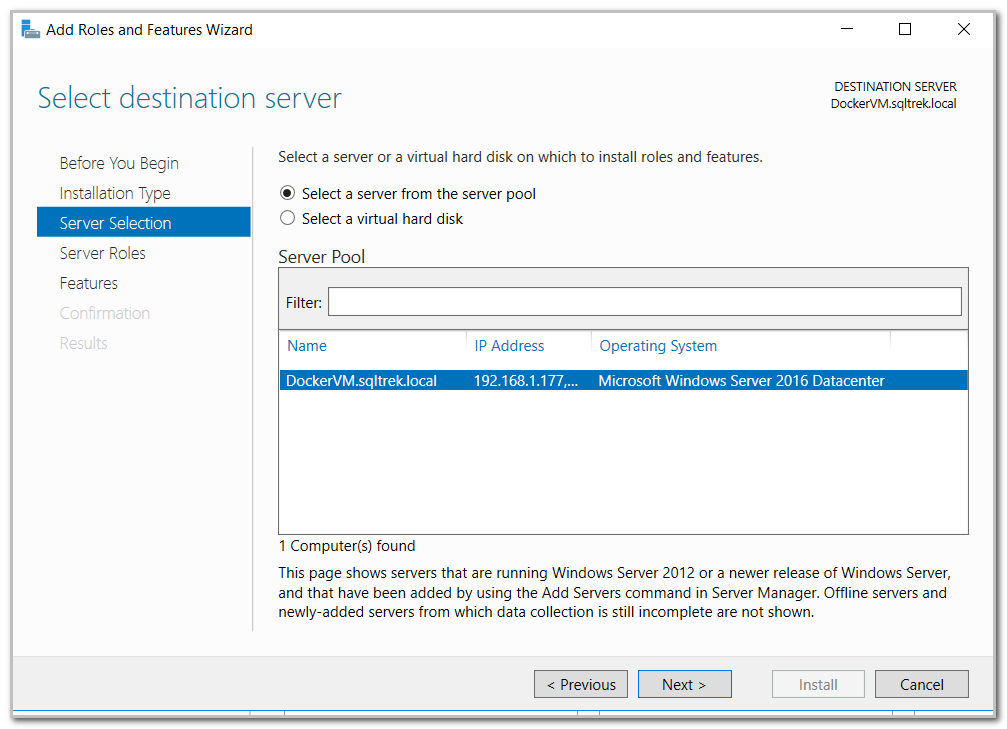 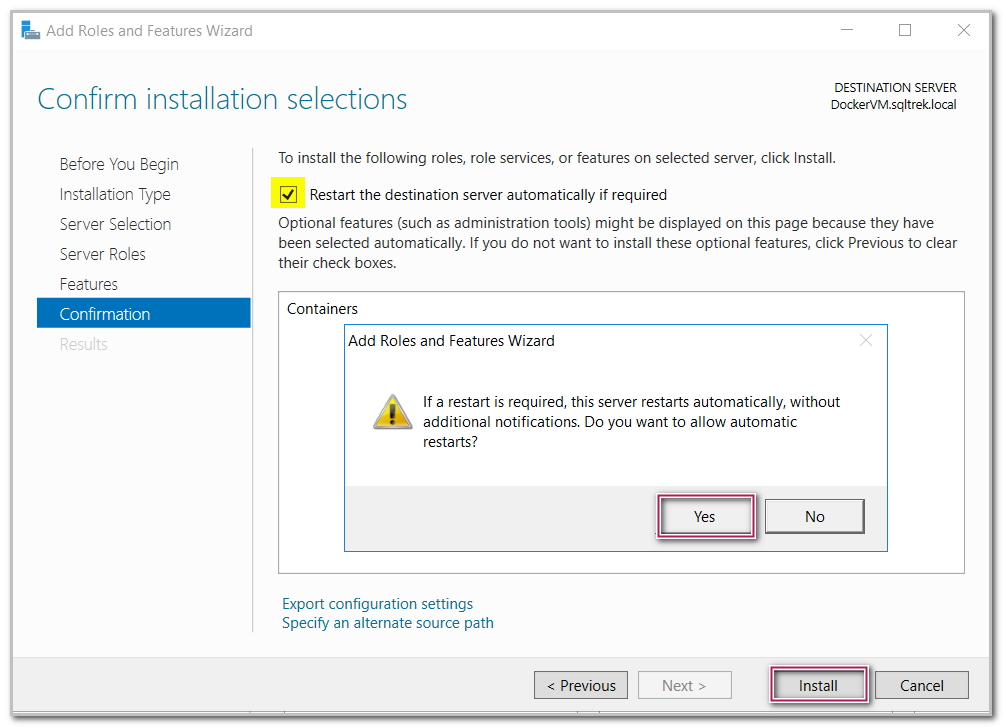 After a minute or so, the server got rebooted as per the option selected above. Now let’s download and install Microsoft package management provider for docker. For that. Open PowerShell in elevated mode (Run as an administrator) and issue below command.

You will be prompted to download and install NuGet provider as well as part of this installation, Type “Y” or just hit enter to proceed further.

In my case, I didn’t have the prerequisite patches installed on my server, so my installation ran into issues as shown in the below screenshot.

After few seconds, you should get below screen, from which you can select “Option 6” to download and install latest updates.

At this point, it prompted me to select either to install “All updates” or “Only recommended updates”. I opted for installing all updates as you can see in the below screenshots.

As you can see, after few minutes I got a popup requesting for system reboot. Select “Yes” and once the server is back online, I tried issuing the same PowerShell command which failed earlier to Install Docker services on my machine. 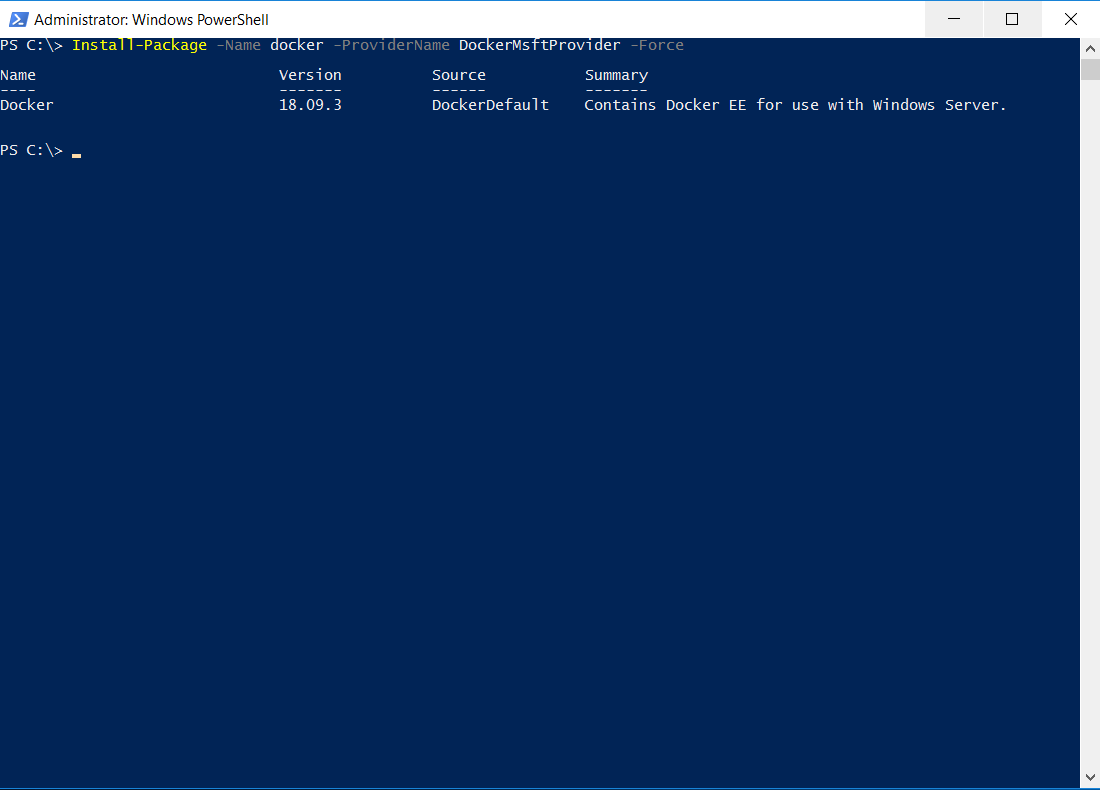 Awesome, this time I had no issues. At this point, you should be able to see Docker being installed as a service under “Services.msc” in stopped state. You can start the service from services console or issue below PowerShell statement to start the service.

Great, now that we have Docker installed on our server, it is time to verify few basic things. Issue “Docker Info” command to get information related to docker installation we just finished.

Issue “Docker version” to get version details as shown below. 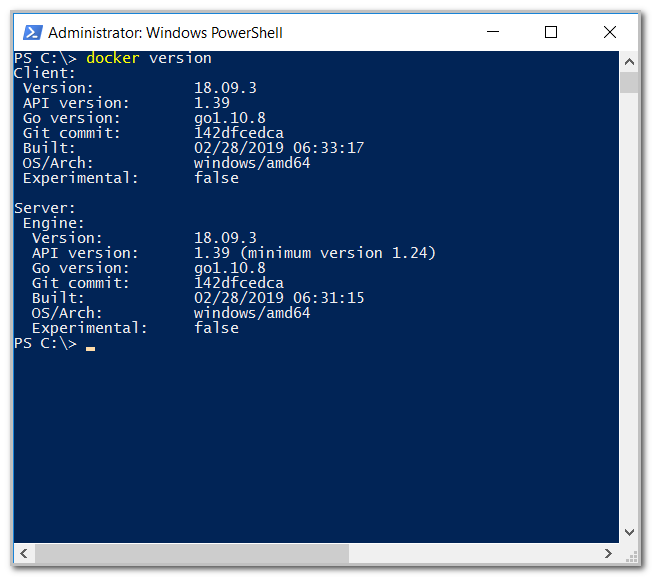 
Now that we have Docker service up and running on our server, we should be able to create SQL containers. First thing first, in order to create a SQL container, we need to have an image. Think of an image as our SQL Server installation media. Similar to how we need media to create a SQL Instance on a machine, we need an image to run a SQL container. These images can be stored and pulled (Analogy – download in our traditional setup) from your own private registry if you have one setup or from Docker hub. Docker hub is a registry/repository provided by Docker company where anyone can upload and store their images. For this article, I will be using an image published by Microsoft in docker hub to create my SQL containers.

To begin with, Let’s search all the Microsoft SQL images available in docker hub by issuing below command.

Just for fun, let’s see if I have any images already available in my local repository. I can issue the command “docker images” for that purpose. As you can see, I have none at this point.

Now, let’s pull (Again…think of it like downloading the media) “mssql-server-windows-developer” to my local registry from docker hub by issuing the below command

Depending on your download speeds, it might take a while. Once it’s done pulling the image from hub, I am issuing the “docker images” command again to check if things appear any different.

As you can see now, I have an image downloaded to my local repository which is ~15 GB in size. You can also notice that this image has been published/created by Microsoft in docker hub 14 months ago.

Now comes the fun part, we can issue below command to create and run the SQL container. Think of running a container is similar to installing a SQL Instance.

Great, Let’s verify the status of the newly created Docker windows container to make sure it’s running. For that you can issue either “Docker ps” or “Docker container ls” commands.

Tip: “Docker ps” command will only list containers which are running currently, if you want to list all the containers, issue “Docker ps -a” command.

Now, Let’s create few more Windows based SQL containers based on the same image. As you can see from the below screenshot, I was able to setup/install three SQL Server Instances using Docker windows container technology in matter of few seconds as opposed to several minutes or even hours per our traditional methods for setting up SQL Instances.

Now let’s get the IP addresses of these Docker windows SQL containers using the below shown command, I need this information to connect to my SQL container from the host machine or remotely using SSMS or any other client tools. 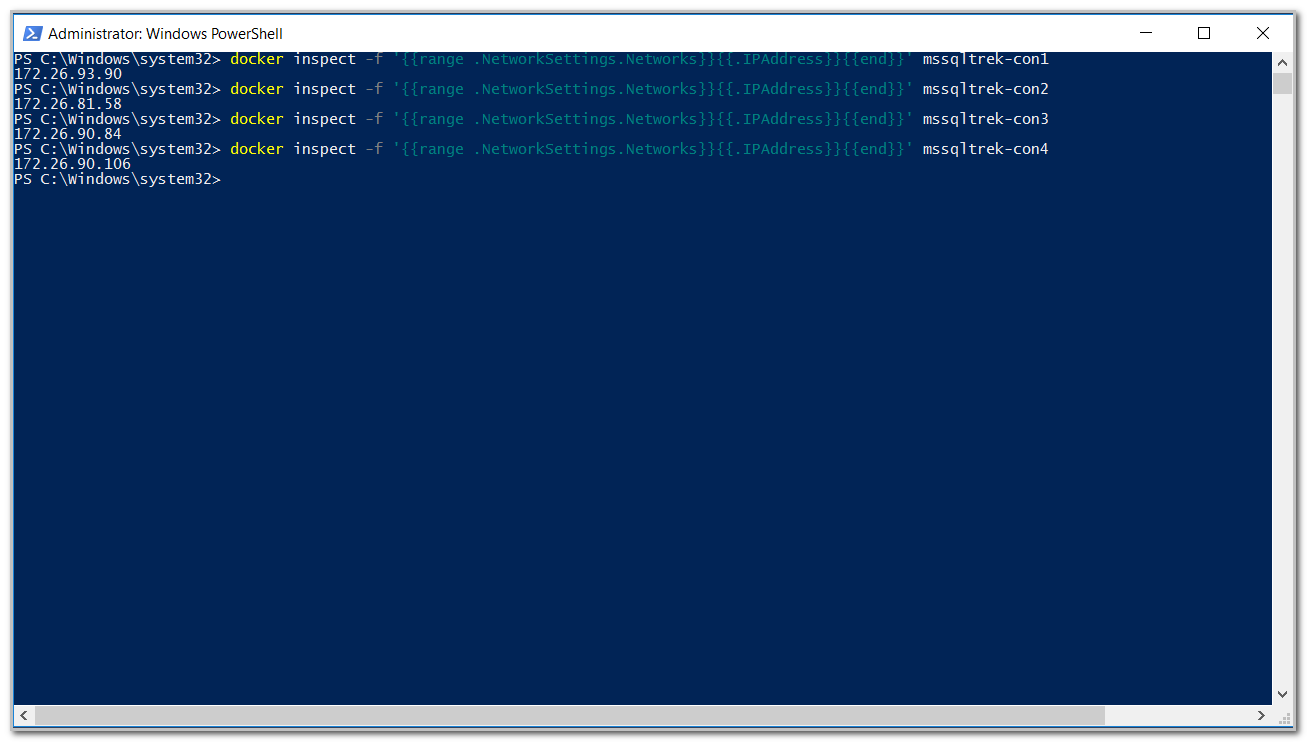 For whatever reason, if you see any issues with starting containers, you can review the logs by issuing the command “Docker container logs –name of the container”. FYI, below are the logs of my first container mssqltrek-con1. 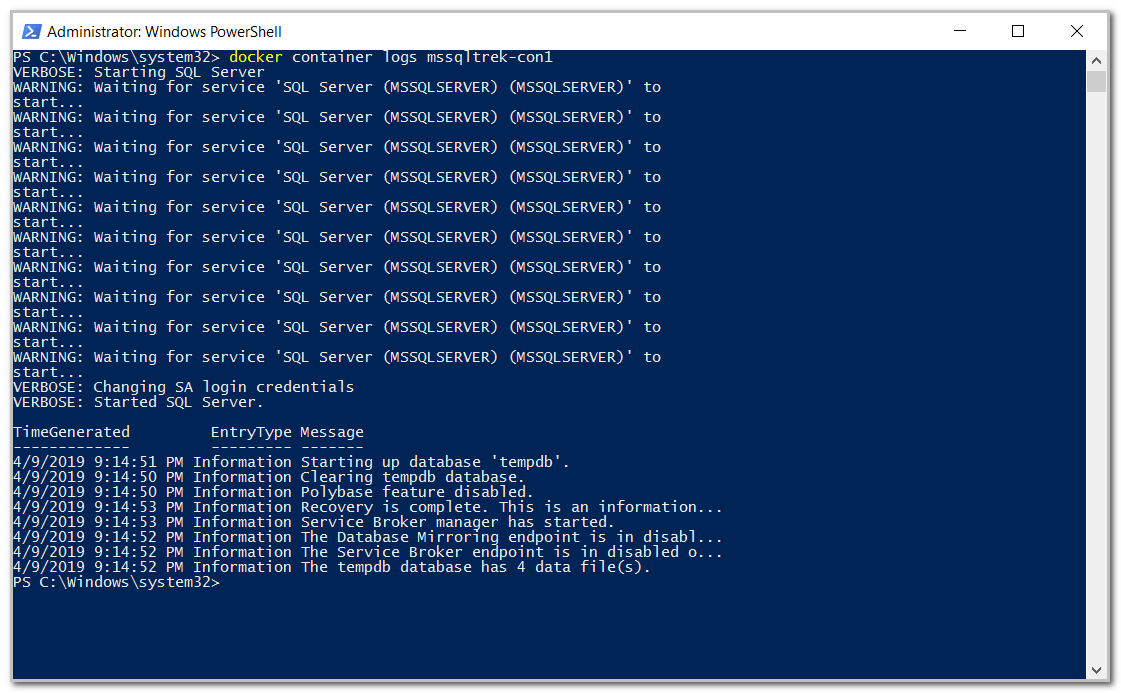 Now that we have confirmed containers are up and running, let’s connect from SSMS. 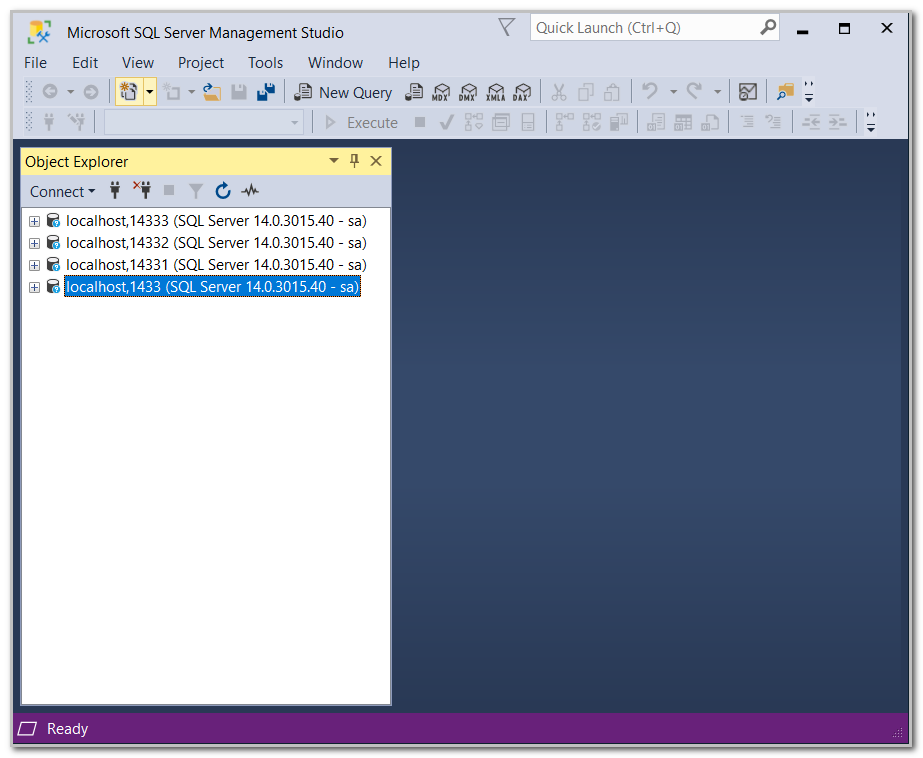 Now, let’s cleanup our environment by removing all the Docker SQL containers which we did created so far. To remove/delete a container, issue the command “docker rm containername”.

As you can see, I ran into errors when I attempt to remove my Docker windows container when it is in running state.

I stopped my Docker windows containers using command “docker stop containername” and then I was able to remove them without any issues as you can see below. 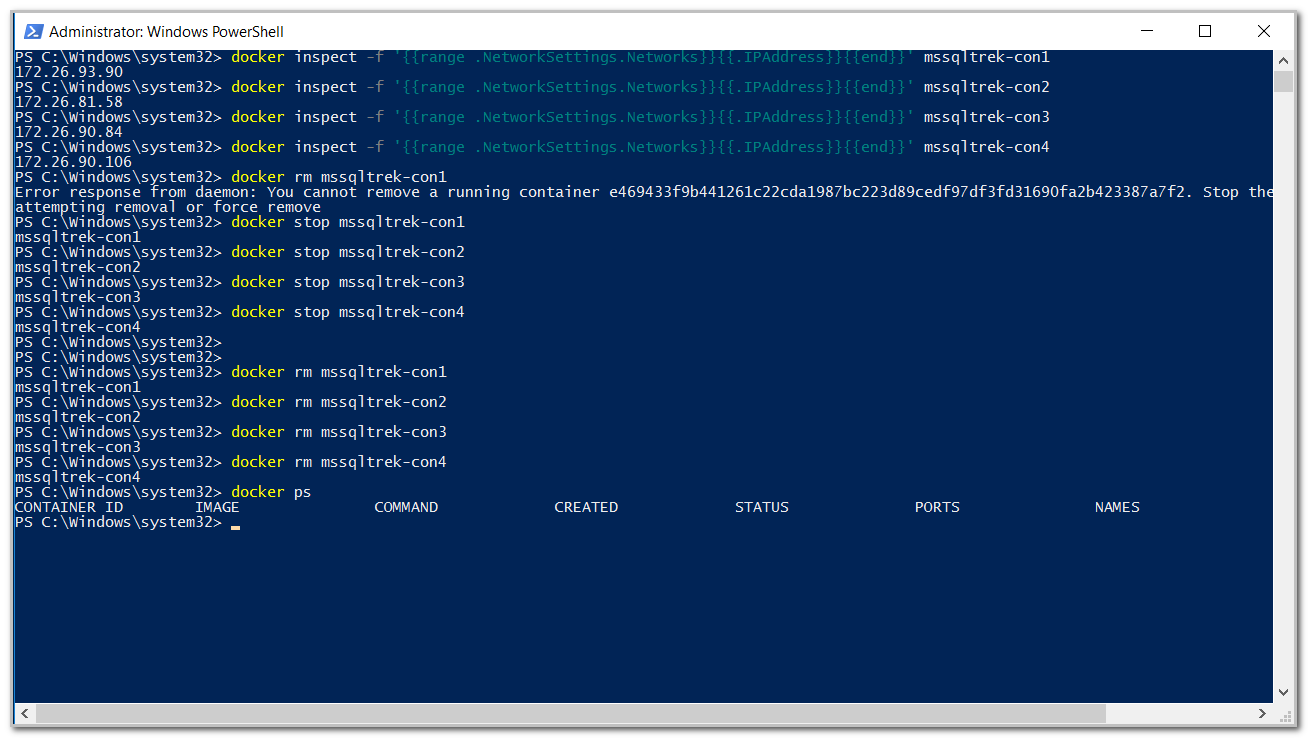 In this article, we have seen how to install containers on Windows Server 2016 from scratch and Install the latest stable version of SQL Server leveraging Docker containers technology. Container technology is here to stay and It’s not the future, it’s present. Several companies are already leveraging Docker containers technology in their shops or at least evaluating it. Getting familiar with deploying and provisioning containers could almost become a mandatory skill in near future especially for DBAs and DevOps. Hope this article will be useful in setting up Docker windows containers in a lab environment to get familiar with and explore the technology.