There is a range of other memory metrics that are not as indicative, and therefore are not commonly used. In this article, we’ll present some of them

Paging is a process that occurs on systems with insufficient. To provide enough memory for the running processes, it temporarily stores some of the memory pages into the paging file on disk. Next time a process needs this page, it will not be read from RAM, but from the page file on disk

When there’s no memory pressure on the system, every process has enough memory, pages are written into memory and flushed after the process is completed, freeing up the page for the forthcoming process

A soft page fault is when a page is still in memory, but on another address, or is being used by another program. Soft page faults don’t affect performance

A useful information related to the paging file usage is the size of the operating system paging file and how much paging file space is available. You can obtain this information from the dm_os_sys_memory view

The threshold you should not reach depends on the size of the paging file, but shouldn’t be more than 70%. As a rule of thumb, you can set the paging file to be 50% of total RAM

As this is one of the Memory Manager counters, you can obtain its value using a query such as

If the number of user connections is much higher than expected, the memory used per connection varies significantly, or these values are constantly increasing, the situation should be investigated and excessive connections killed. Besides being a performance issue, this can be an indication of a security problem

This number of pages moved at a checkpoint is relative and depends on the hardware configuration and server usage. It’s recommended to create a baseline for this metric and compare the current values to it 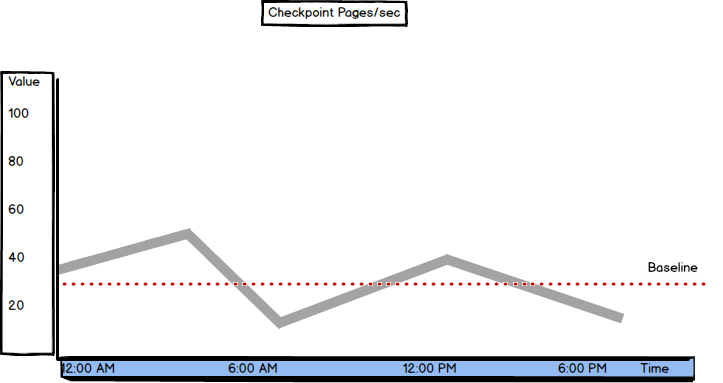 Stolen Server Memory (KB) shows the amount of memory used by SQL Server, but not for database pages. It is used for sorting or hashing operations, or “as a generic memory store for allocations to store internal data structures such as locks, transaction context, and connection information” [3]

The Stolen Server Memory (KB) counter was introduced in SQL Server 2012. In earlier versions, there was the Stolen pages counter

There’s no specific threshold value, so it’s recommended to monitor this counter for a while and set a baseline. Note that the value should be close to the Batch Requests/sec value and low compared to the Total Server Memory counter. A high amount of stolen memory indicates memory pressure

A lock block is a locked source, such as a table, page, or row

Locking is a normal process on SQL Server. When a process uses a resource (e.g. page), the resource is locked. If another process tries to use the same resource, it will have to wait until the resource is released, which affects performance

Locks occur when a process holds a resource longer than it should before releasing it, e.g. due to inefficient queries, or an error occurs so that the resource is not released automatically

Lock Blocks shows the number of lock blocks in use on the server (refreshed periodically). A lock block represents an individual locked resource, such as a table, page, or row

Lock Blocks Allocated shows the number of lock blocks allocated to support locks. The more locks occur, the more will be allocated

When SQL Server is set to use dynamic lock allocation, 2500 lock blocks and 5000 lock owner blocks will be initially allocated per node

The number of Lock Blocks should be lower than less than 1,000. If the value is higher, query tuning and optimization are the first steps to solve this issue