In this part, we will continue with SQL Server memory performance metrics and present Lazy Writes, Free List Stalls/sec, and Memory Grants Pending

Best performance is provided when SQL Server reads pages it needs from the buffer instead from disk. As the space available in the buffer is limited by physical memory, pages are constantly moved from the buffer to disk, to free up the space for new pages. These pages are usually moved at a check point, which can be automatic (occurs automatically to meet the recovery interval request) , indirect (occurs automatically to meet the database target recovery time), manual (occurs when the CHECKPOINT command is executed), and internal (occurs along with some server-level operations, such as backup creation)

At a checkpoint, all dirty pages containing both committed and uncommitted transactions are flushed to disk. Then, the page in the buffer cache is marked for overwriting

"For performance reasons, the Database Engine performs modifications to database pages in memory—in the buffer cache—and does not write these pages to disk after every change. Rather, the Database Engine periodically issues a checkpoint on each database. A checkpoint writes the current in-memory modified pages (known as dirty pages) and transaction log information from memory to disk and, also, records information about the transaction log."[1]

The lazy writer is a process that periodically checks the available free space in the buffer cache between two checkpoints and ensures that there is always enough free memory. When the lazy writer determines free pages are needed in the buffer for better performance, it removes the old pages before the regular checkpoint occurs

If a dirty data page (a page read and/or modified) in the buffer hasn’t been used for a while, the lazy writer flushes it to disk and then marks as free in the buffer cache

The threshold value for Lazy Writes is 20. If SQL Server is under memory pressure, the lazy writer will be busy trying to free enough internal memory pages and will be flushing the pages extensively. The intensive lazy writer activity can cause a system bottleneck, as it affects other resources by causing additional physical disk I/O activity and using more CPU resources

If the Lazy Writes value is constantly higher than 20, to be sure that the server is under memory pressure, check Page Life Expectancy. If its value is low (below 300 seconds), this is a clear indication of memory pressure. Check the Free List Stalls/sec value as well. If above 2, consider adding memory to the server

Ideally, Lazy Writes should be close to zero. That means that the buffer cache doesn’t have to free up dirty pages immediately, it can wait for the automatic check point

It would be logical to obtain the Lazy Writes value by querying the sys.dm_os_performance_counters view, like for other Buffer Manager counters

But, the value returned is higher by several orders of magnitude from the recommended minimum

The reason for this is that the value shown for the cntr_type 272696576 in the view is incremental and represents the total number of lazy writes from the last server restart. To find the number of Lazy Writes in a second, find the difference in the Lazy Writes counter values in two specific moments and divide by the time 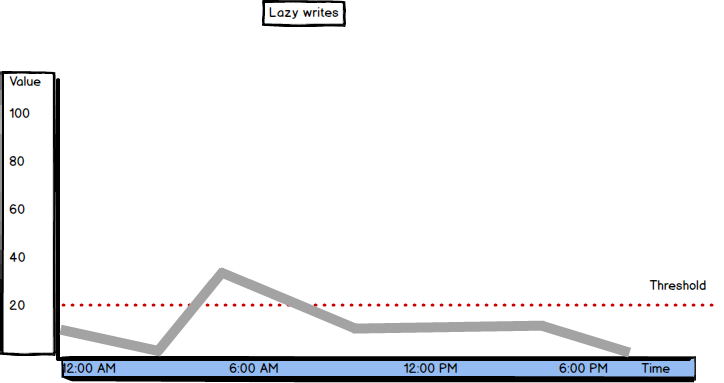 "Indicates the number of requests per second that had to wait for a free page."[2]

As the Free list stalls/sec counter type is 272696576, the current value has to be calculated using the same method as for Lazy Writes 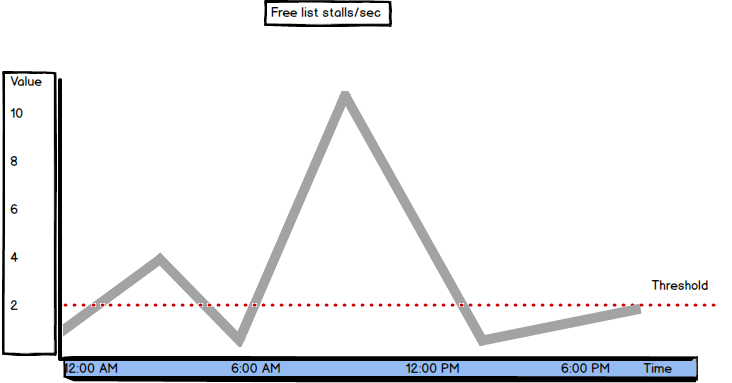 The recommended Memory Grants Pending value is zero, meaning no processes are waiting for the memory, as there’s enough memory so the processes are not queued. If the value is constantly above 0, try with increasing the Maximum Server Memory value

The value for this metric can be queried from the sys.dm_os_performance_counters view. No additional calculation is needed, as the cntr_type value 65792 shows the current value

As high Memory Grants Pending values can be caused by inefficient queries, bad or missing indexing, sorts or hashes, query tuning and workload optimization are the first steps in resolving this issue. The last resource is adding more physical memory

If the memory granted is insufficient for a query, which is especially the case with expensive operations that use a lot of resources, such as hashes and sorts, a hash or sort warning will be logged into a SQL trace

If a query spends too much time waiting for the memory to be granted, it will time out. If many queries wait for the memory grants, it’s likely that they will cause a block before they time out

Other SQL Server Memory Manager metrics that indicate memory usage by queries are:

So far, we have presented the most important and commonly used SQL Server memory metrics. They provide three different types of information they provide. The first type is straightforward where the value clearly indicates bad or good performance, like Memory Grants Pending. The second is where checking the other metrics values is highly recommended because the bad value of the metric itself doesn’t have to be an indication of bad performance. This is the case with Buffer Cache Hit Ratio. The third group of metrics are the ones that have no specific values for good and bad performance, but you should monitor them for a while and establish a baseline that you will consider as normal operation