A five recommended Trace Flags can be considered as a part of the SQL Server database administrator’s best practices checklist; such as the 4199 Trace Flag that is used to enable the query optimizer hotfixes that are made in the previous releases of the current SQL Server version. Trace Flag 8048 is used to enable the SOFT NUMA option for the large systems. Trace Flag 2371 will override the 20% SQL statistics auto update threshold and will use a dynamic threshold value depending on the number of rows in your table. Also, it is a best practice to enable the Trace Flag 1117 to allow auto growth on all database filegroup files together and Trace Flag 1118 to reduce the Shared Global Allocation Map (SGAM) contention. In this article we will concentrate on the last two trace flags in SQL Server 2016.

Where the following statement will enable the Trace Flag 1118 globally: 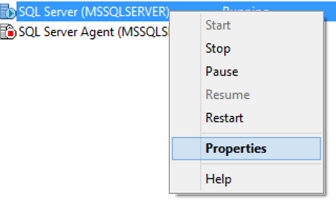 In the displayed SQL Server Instance Properties window, choose the Startup Parameters tab, and write (-T4199) value in the Specify a Startup Parameter field to enable the Trace Flag 4199, then click Add button as follows: 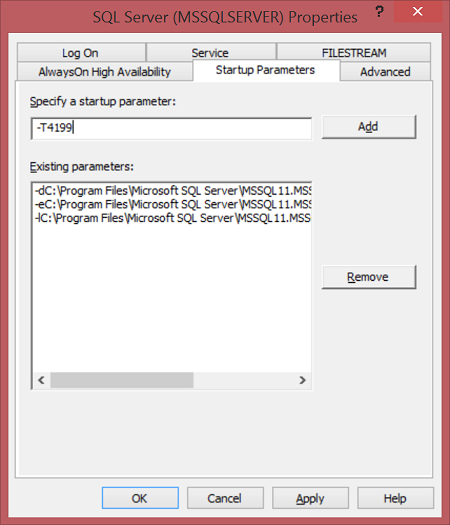 The below warning message will be displayed to inform you that the new added startup parameter will take effect after restarting the SQL Server service:

The status of the enabled Trace Flags can be checked using the DBCC TRACESTATUS SQL statement, that shows if the Trace Flag is enabled or not and if it is enabled at the Session or Global level as follows:

There is another way that can be used to enable the Trace Flag for a specific query; the QUERYTRACEON table hint statement. A good example of using this method is enabling the 9481 Trace Flag to revert back to the legacy cardinality estimator when you are using SQL Server 2016 as in the below SELECT statement:

If you manage to disable a specific Trace Flag, the DBCC TRACEOFF statement can be used to perform that. The below statement is used to disable the Trace Flag 4199 on the current sessions:

And the following statement will disable the Trace Flag 4199 globally:

Now, we have a good idea about the SQL Server Trace Flags in general. As we mentioned previously, our main concerns here are Trace Flag 1117 and Trace Flag 1118, which we will discuss in details in the rest of this article.

In SQL Server 2016, enabling the Trace Flag 1117 will not force all files under the same filegroup to grow together. Let’s first list our test database files with its size using the below query:

If we try to enable the 1117 Trace Flag, apply large number of inserts and disable the Trace Flag again as the below query:

Then check the database files again, the result will be like:

The below ALTER DATABASE command is used to will force all SQLShackDemo database files under the Primary filegroup to grow together:

If you repeat the insert statement again:

And check the database files growth, the result will be like:

The second Trace flag that also changed in SQL Server 2016 is Trace Flag 1118. The 1118 Trace Flag is used to reduce the SGAM page contention in the SQL Server. The SGAM or the Shared Global Allocation Map is responsible for tracking page allocation within the extents. SQL Server data is stored in data pages, with each page size 8 KB, each 8 contiguous pages form a data extent with 64 KB size. In SQL Server versions prior to SQL Server 2016, when a new object is created, the first eight pages are allocated from different extents. This allocation type is called Mixed Extents Allocation. When the object requires more pages, it will be allocated from the same extent, in a technique called Uniform Extent Allocation. With a lot of mixed pages within different extents, the allocation will be more complex, with heavy scans on the SGAM page.

Using the Trace Flag 1118, the first eight pages will be allocated from the same extent when creating a new database object, minimizing the scan operations on the SGAM page, by turning off the Mixed Extents Allocation.

In SQL Server 2016 the Trace Flag 1118 has no effect, as the Uniform Extent Allocation is the default allocation method, where the first 8 pages will be allocated from the same extent once a new database object is created, with the ability to turn the MIXED_PAGE_ALLOCATION ON and OFF using the below ALTER DATABASE statement:

If we try to add the Trace Flag 1118 to the Startup Parameters in SQL Server 2016 as described previously and check the SQL Server Error Log, a message will be displayed informing us that this Trace Flag is no longer in use and will not take effect, and that it is replaced by the ALTER DATABASE statement:

To understand how it works let’s create a new table in our SQLShackDemo database and insert records into that table as in the below script:

Now, run the below command that list all pages associated with the new table:

The output of the previous command will be similar to the below: 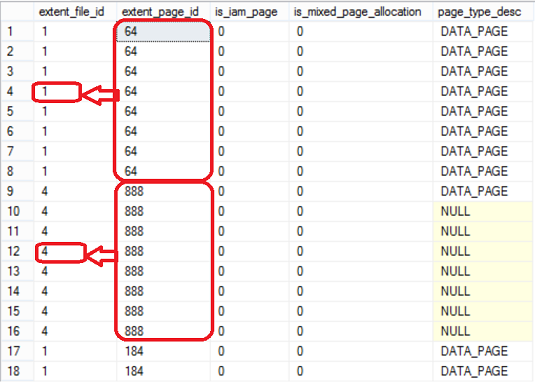 As we can see from the previous image, the pages are allocated in our table uniformly, where the first eight pages allocated from the same extent and so on.

SQL Server Trace Flags are useful switches that can help database administrators control the SQL Server Engine behaviors. Enabling some of these Trace Flags becomes a best practice in order to force the SQL Server to behave in the best way at some circumstances. In SQL Server 2016, two of these Trace Flags; 1117 and 1118 are no longer applicable and replaced by new options using the ALTER DATABASE SQL command. This change allows the database administrators to deal easily with these options and take benefits of it.