Pros for using a natural key as a primary key

Cons for using a natural key as a primary key

If the business logic changes, you’ll need to change all references to an existing primary key. Some examples are the change in ISBN (International Standard Book Number) from the 10 digit universal identifier into the 13 digit identifier. In the case of using SSN (Social Security Number) as a primary key you need to consider a possibility that SSNs may be reused after a person’s death and also that in cases of fraud, or an identity thefts an individual will get a new SSN.In the following example if a Customer’s SSN changes that change will have to be reflected in the two tables that reference the Customer table 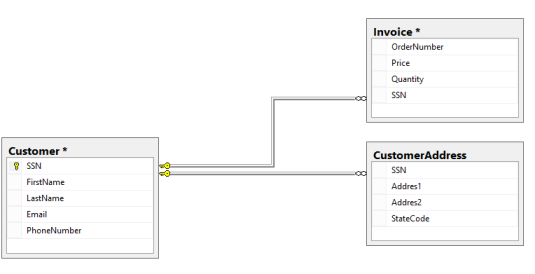 The record cannot be entered into a table until the value of a primary key is known.

A surrogate key is a unique number generated by SQL Server or a database itself, and has no business logic. In SQL Server it is most often used as an IDENTITY column or a Globally Unique Identifiers (GUID) column – a globally unique 128 bit long data type.

Pros for using a surrogate key as a primary key

Cons for using a surrogate key as a primary key

The CPU time needed to parse and compile the JOIN statement with varchar data type columns and a composite primary key:

The parse and compile time of the JOIN statement with an integer data type primary key:

Choosing a primary key by replacing a natural key with a surrogate key is a method mostly used to reduce coupling between a database schema and external applications in cases when an existing natural key may change. Also, a large natural key may reduce performance

Regardless of a chosen primary key type for your database tables you should choose a single strategy and be consistent in applying it throughout your database. By refactoring your database to consolidate key strategy you can achieve code consistency because having a variety of keys your code to access a database is also implemented in various ways which increases the maintenance of code having your developers to follow all different approaches. Also, if your company has a corporate standard for a preferred key strategy you may discover that your schema doesn’t comply with the rules, so you’ll need to refactor your primary keys and implement the consolidate key strategy refactoring

SQL by Design: How to Choose a Primary Key
Surrogate vs Natural Primary Keys – Data Modeling Mistake 2 of 10
Primary Keys: IDs versus GUIDs

Milica Medic
In my spare time, I love spending time with friends and family. Going to the movies is a must if there is some new epic or sci-fi movie. In the summertime, I enjoy scuba diving and reading lots of books

View all posts by Milica Medic