The PowerShell execution policy was developed with a vision to be friendly to administrators, and at the same time, be accessible to end users. More than the former, the latter goal was a little challenging to pull off, considering that convenience is, more often than not, inversely proportional to security.

PowerShell scripts do not run out of the box

There were two major flaws in the aforementioned model:

Even if the user manages to right-click on the script and selects Run with PowerShell, or loads up PowerShell ISE and hits the F5 key, you would get an error:

File C:\Users\Prashanth\Downloads\RandomInternetScript.ps1 cannot be loaded because the execution of scripts is disabled on this system. Please see “get-help about_signing” for more details.

PowerShell is very powerful. Its access goes straight into the computer. From the system administration standpoint—starting from fetching/setting the date and installing/uninstalling applications—there is hardly anything that PowerShell cannot do. Apart from managing Windows workstations and servers, PowerShell is extensively used with other applications and systems as well, such as Microsoft Exchange, Citrix XenApp and Nutanix HCI, to name a few.

PowerShell execution policies are several. They are set at different levels to control how the computer behaves with PowerShell scripts. Microsoft’s own documentation will give you a good picture of the different execution policies (or you can run Get-Help about_Execution_Policies to know more about these policies).

Here is a gist of the different PowerShell execution policies and what they mean:

PowerShell ships with Restricted set as the default execution policy, starting Windows Server 2012 (or Windows 8). Therefore, you cannot run a script right out of the box, unless you change the policy to something else before.

You can run individual commands on the PowerShell console, though. Even scripts written by you cannot run with this policy set on your computer.

This is the safest policy available, in case running scripts is permitted on the computer. With this policy set, your computer will run those PowerShell scripts that are accompanied by a valid signed with a valid digital signature (signed using a code signing certificate).

The certificate used to sign the script should be trusted by your computer. Otherwise, the script will not run. It also means that scripts that are tampered with after being digitally signed will not run either.

This condition also applies to scripts that you wrote, even on the computer that you are trying to run the script on.

This is also a safe PowerShell Execution policy to set in an enterprise environment. This policy dictates that any script that was not created on the system that the script is running on, should be signed. Therefore, this will allow you to write your own script and execute it. You would not be able to run a script that was downloaded from the Internet, or got from a friend who wrote it under his account or on a different computer. PowerShell differentiates between script you wrote on that computer, and a script that came from elsewhere using the file metadata.

This policy is unsafe in any environment, and should be applied only when you know what you are doing. Also, keep in mind the scope at which you set this policy. More on this later in the post.

The Unrestricted Execution Policy lets you run PowerShell scripts without any restrictions.

This policy is best avoided. This policy should be used only in those cases where you have an alternative authorization mechanism already in place, and you do not want PowerShell to interfere with the execution. 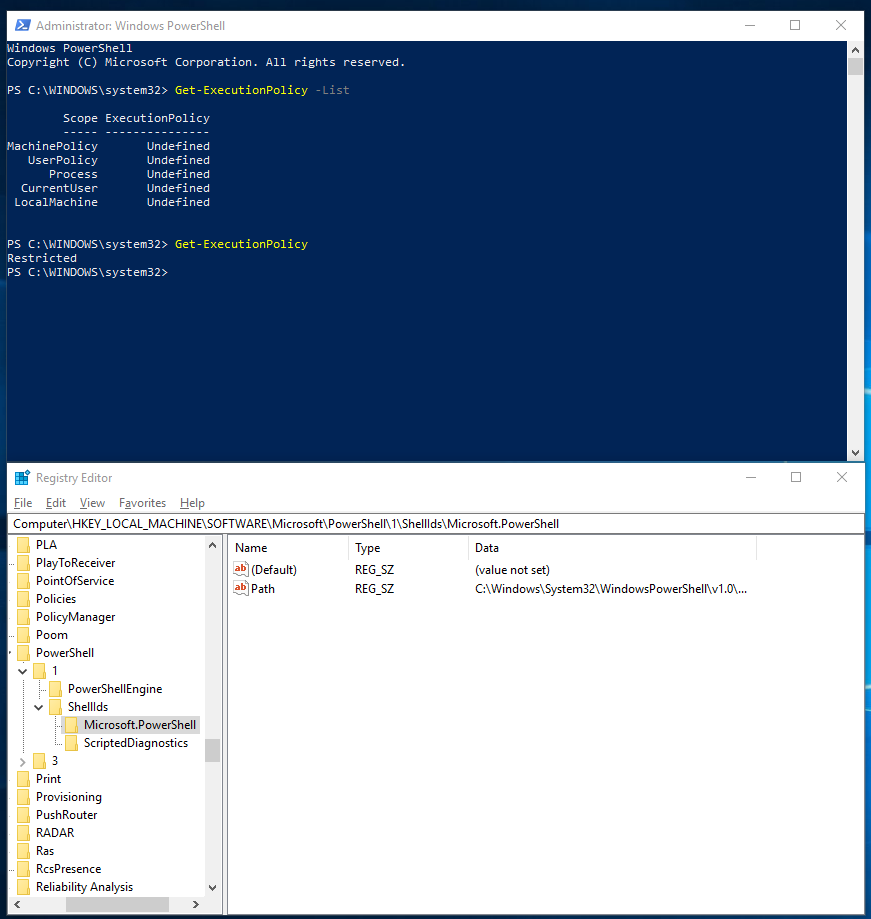 Now, we set the PowerShell Execution Policy at the local machine level, to AllSigned. 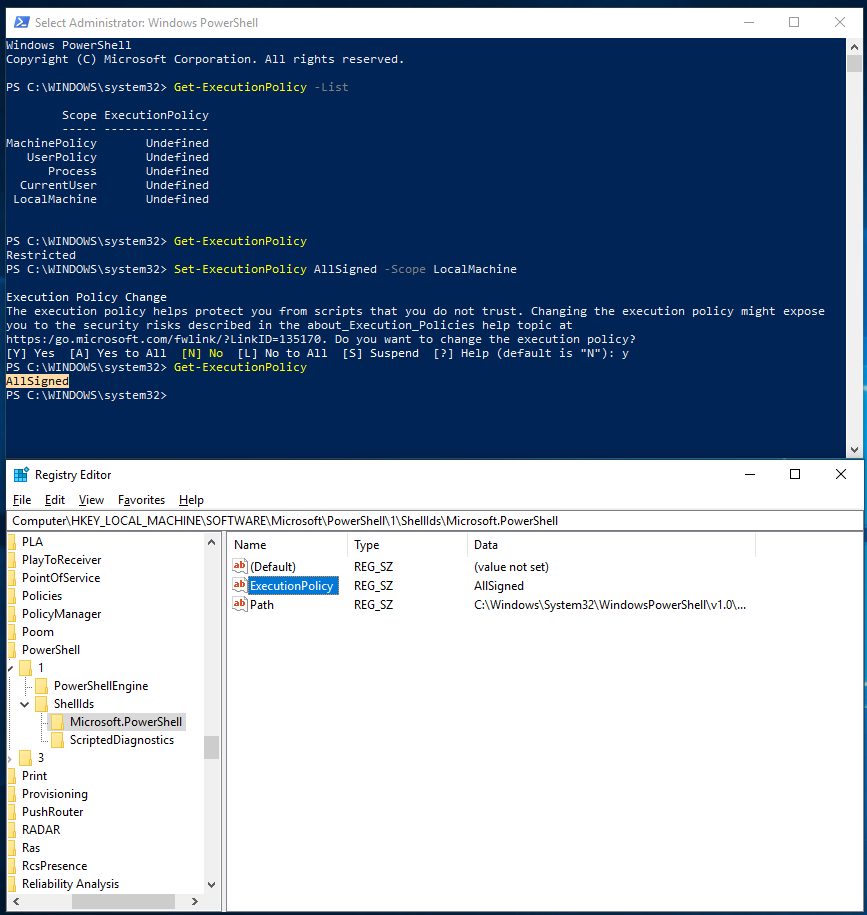 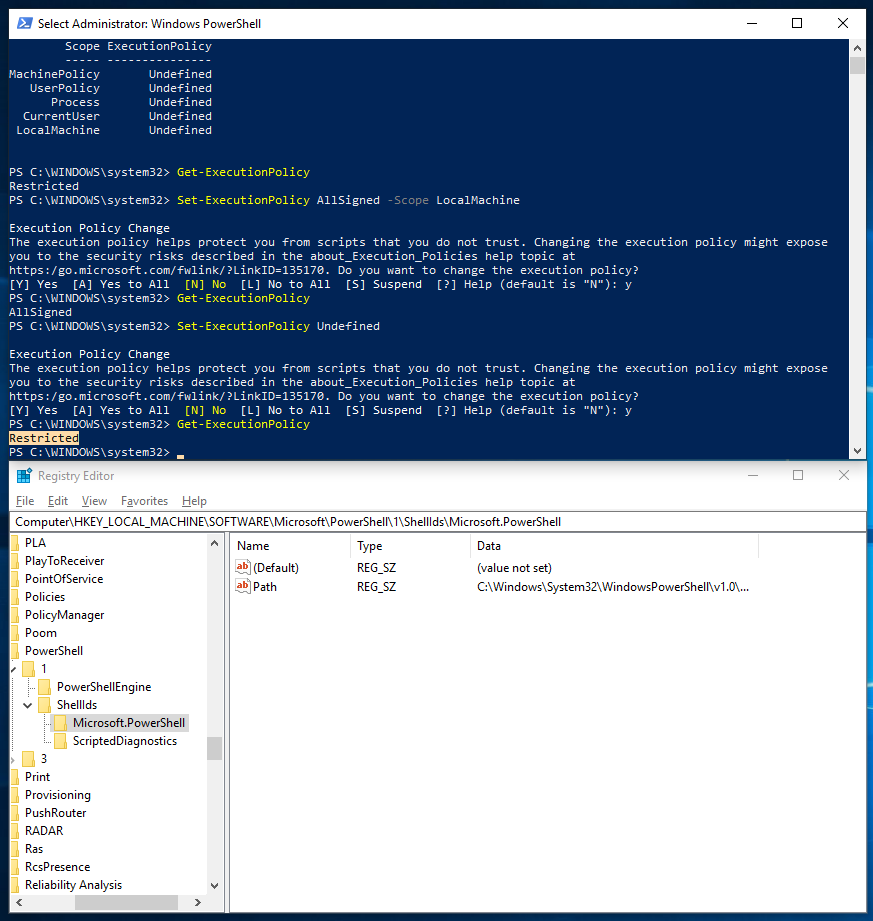 The PowerShell Execution Policy set on Process is stored in the memory (RAM), and is valid for as long as the PowerShell process on which the policy was set, is active. On a newly-opened PowerShell session, the resultant policy will be that set on CurrentUser.

If the CurrentUser does not have any policy set (in other words, the PowerShell Execution Policy set on CurrentUser is Undefined), the policy set on LocalMachine will be applied to CurrentUser, which will subsequently flow to Process, unless there is an override at the Process level.

If there is no policy set at CurrentUser, LocalMachine or Process, the default PowerShell Execution Policy of Restricted will apply from PowerShell itself.

To get a list of the available scopes at which you can set PowerShell Execution Policy levels, run the following command:

You would see an output similar to the following (also, as said before, notice the resultant PowerShell execution policy in spite of the policy being Undefined at all scopes):

PowerShell Execution Policies cannot be set at MachinePolicy or UserPolicy levels from the console; they have to be done using Group Policies. If you try to set an execution policy at these scopes from the PowerShell console, you would get an error:

Set-ExecutionPolicy : Cannot set execution policy. Execution policies at the MachinePolicy or UserPolicy scopes must be set through Group Policy.

If I were to share my recommendation, I would set, on an environment that has adequate security measures applied to it at the perimeter and within the environment itself, the following:

Of course, this is a recommendation. As an Enterprise Administrator, you should have a good understanding of what is best for your environment. The goal of this article is to explain what the group policies are, and explain what the scopes are, by means of a deep-dive look at the different aspects concerning Execution Policies in PowerShell.