We use the SQL CHARINDEX function to find the position of a substring or expression in a given string. We might have a character in different positions of a string. SQL CHARINDEX returns the first position and ignores the rest of matching character positions in a string.

Example 1: Search a character position in a string

In this example, we want to find position of @ character in a specified email address rajendra.gupta16@gmail.com

In the following screenshot, we can see position of each character in the email address string. The character ‘@’ is in position 17. We get this position in output of SQL CHARINDEX.

Similarly, let’s search dot (.) position in this string. We can see that the dot is on position 9th and 23rd in the specified string (email address).

Once we execute this script, it returns the first position of the dot in the output. It starts the search from starting position of a string and stops once it finds a suitable match.

Example 3: Search a substring position in a specified string in SQL CHARINDEX

In previous examples, we searched a specific character in a specified string. We can also search a substring as well in a string.

In the following query, we declared a variable @ExpressionToSearch for the string and set a value on it. We want to search for substring Rajendra in this string.

If an exact match is not found it returns 0 in the output.

Example 4: Search a substring position in a specified string with multiple matching in SQL CHARINDEX

We can use SQL CHARINDEX with SQL Case statement to search a particular substring existence in a specified string.

In the following screenshot, we can see that SQL CHARINDEX function checks for a particular substring. If it returns a value greater than 0 it means substring exists in specified string else it does not exist.

In the previous examples, we did not use case sensitive search. For example, in the following query, we want to search for substring sqlshack in our string. This substring exists does but it exists in upper case.

It does not perform case sensitive search, and we still get the correct output.

We can use SQL CHARINDEX for existing data in a table. We can use it to get output in a separate column. In the following example, we want to check the position of character R in empname column values of the Employee table.

In the following screenshot, we have a new column to get position of character R in EmpName column values. If Empname does not contain specified character R, it returns 0. 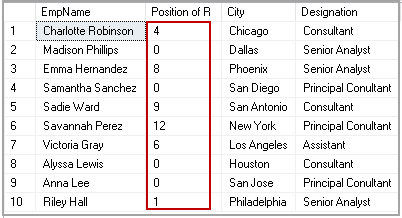 Let’s update one record in Employee table and replace empname with NULL.

Rerun the SQL CHARINDEX query, and we see value NULL in Position of R column. If we have a NULL value in a column, it also returns a NULL value. 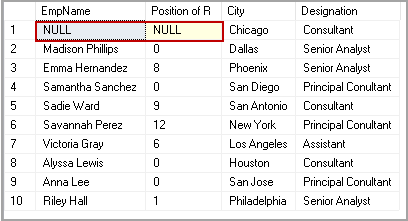 We can search for numeric value as well as using SQL CHARINDEX. Suppose we want to find a position of character 1 in empid column of the employee table.

We need to specify numeric value as well in single quotes. If we do not put single quotes, it gives following error message.

In this article, we explored SQL CHARINDEX function and its usage with various examples. Please feel free to provide feedback or ask questions in the comment section below.