This article explores the process to recover data in AWS RDS SQL Server and its recent enhancements.

Amazon Web Services (AWS) is a leading cloud solutions provider. It is a highly available solution and provides better infrastructure management with reduced administrative costs – prompting many organizations to move their infrastructure to the cloud. With its pay-as-you-go model, AWS frees organizations from maintaining equipment, resulting in time and cost savings.

Amazon RDS is a platform as a service (PaaS) solution that provides highly available SQL Server instances while removing the need to maintain underlying infrastructure. It also reduces administrative efforts for backups, database maintenance, minor upgrades, and monitoring. You can learn more about Amazon RDS using this link.

Let’s explore a scenario involving an on-premises SQL Server instance. Suppose you have a database, TestDB that is backed up regularly. A developer accidentally deletes rows from a table in the database that need to be recovered. You can think of the following solutions:

Unfortunately, there are some limitations in the RDS database, and you cannot recover your data from a database backup since it does not allow you to restore the database with a new name from the same backup file. We will cover this scenario and solution to recover data in this article.

In the following screenshot, we can see the Amazon RDS SQL Server Express edition and DB identifier is myrdsinstance:

If you click on myrdsinstance under the DB identifier column, it launches DB instance properties. Under the Connectivity and security tab, you can see the endpoint. We require this endpoint to connect to RDS instance using SSMS.

You should have Public accessibility set to Yes in order to connect it outside the Amazon cloud:

In SSMS, specify the endpoint in the server name and provide the user name and password specified during Amazon RDS instance creation: 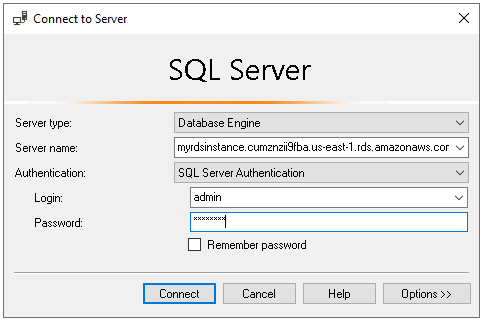 Create a new database and objects

Execute the following CREATE DATABASE statement for creating testdb that stores our tables:

Once a database is created, we can use the sp_helpfile command to see data and log file information:

We can then create a Customers table and insert two records in it.

You can copy S3 bucket ARN from S3 bucket properties. Select the S3 bucket and click on Copy Bucket ARN as shown in the following image:

Execute the backup command mentioned above, and it starts the database backup.

We need to use another stored procedure to track the status of the database backup. Specify the task id from the above screenshot:

You can execute this procedure multiple times to see the status changes.

As shown below, the status changes: Created -> In_PROGRESS -> SUCCESS:

If there is an error while doing a database backup, you can see the error message in the task status:

Once the task status is completed successfully, you can see the backup file in the S3 bucket:

We have database backup now. Suppose someone accidentally deleted records from the database:

We have a database backup before the accidental removal of data. Previously Amazon RDS did not allow restoring a database backup on the same instance if the source database was already present on the RDS instance. You can reference the backup error message in Amazon blogs.

For example, in our case, we cannot restore a database backup from the S3 bucket into an existing RDS instance with a different name such as testdatabase_recoverdata. We will cover the reason for this later.

You can restore the backup on a different instance and script out data there. This means you need to manufacture a separate RDS instance for restoration purpose only.

On October 24th, 2018, Amazon announced an exciting feature for database backup and restore. Below is the screenshot from the RDS feature announcement.

Amazon RDS now supports restoring a differently-named database from the backup to an existing RDS instance where the source database exits:

Let’s restore the database from the backup in the S3 bucket. We need to use the same stored procedure, only with different parameters:

It starts a task to restore the database and you can note the task id:

Check the status for the database restore using the query below. In the following screenshot, we can see status Success along with duration, source backup file, and database name.

Here is the result:

Let’s verify the record in the new database by running the query below:

We can see both the records in the restored database. We can script this out and recover data in the source database:

We cannot use the import and export wizard in Amazon RDS to export data from a restored database to a source database: 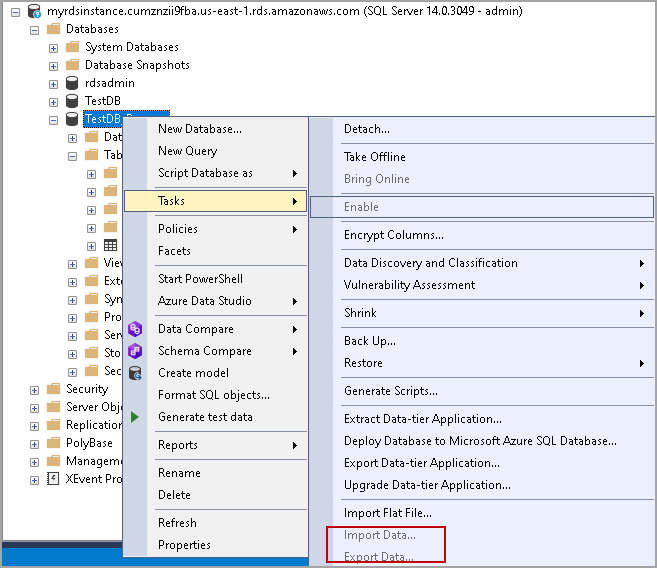 Earlier, we mentioned that Amazon RDS does not allow database restoration from backup on the source database RDS instance. Let’s see the reason for it.