We have some custom files that we receive from different providers and for these situations we are unable to use standard ETL programs without any customization. Since we’re expanding our ability to read these custom files with .NET, we’re looking for efficient ways to read files with PowerShell that we can use in SQL Server Job Agents, Windows Task Schedulers, or with our custom program, which can execute PowerShell scripts. We have many tools for parsing data and wanted to know efficient ways of reading the data for parsing, along with getting specific lines of data from files by number, or by the first or last line of the file. For reading files efficiently, what are some functions or libraries we can use?

For reading data from files, we generally want to focus on three major functions for completing these tasks along with some examples listed next to them of these in practice:

The latest version of PowerShell (version 5) and many earlier versions of PowerShell come with the Get-Content function and this function allows us to quickly read a file’s data. In the below script, we output an entire file’s data on the PowerShell ISE screen – a screen which we’ll be using for demonstration purposes throughout this article: 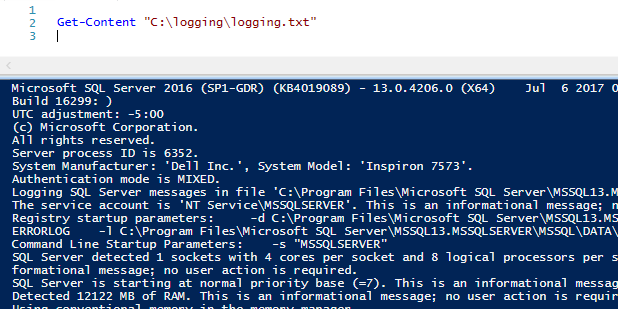 Get-Content outputs the entire file of logging.txt to the PowerShell ISE screen (note that the above image is only part of the full file).

We can save this entire amount of data into a string, called ourfilesdata:

We can select a part of the file by treating our variable (object being another name) like a SQL query where we select some of the files instead of all of it. In the code below, we select the first five lines of the file, rather than the entire file:

PowerShell ISE’s output window only returns the first five lines of the file.

We can also use the same function to get the last five lines of the file, using a similar syntax:

PowerShell ISE’s output window only returns the last five lines of the file.

PowerShell’s built-in Get-Content function can be useful, but if we want to store very little data on each read for reasons of parsing, or if we want to read line by line for parsing a file, we may want to use .NET’s StreamReader class, which will allow us to customize our usage for increased efficiency. This makes Get-Content a great basic reader for file data.

In a new PowerShell ISE window, we’ll create a StreamReader object and dispose this same object by executing the below PowerShell code:

In general, anytime we create a new object, it’s a best practice to remove that object, as it releases computing resources on that object. While it’s true that .NET will automatically do this, I still recommend doing this manually, as you may work with languages that don’t automatically do this in the future and it’s a good practice.

Nothing happens when we execute the above code because we’ve called no method – we’ve only created an object and removed it. The first method we’ll look at is the ReadToEnd() method:

The ReadToEnd() method for StreamReader looks identical to Get-Content in the ISE window in that it outputs all the file’s data.

As we see in the output, we can read all the data from the file like with Get-Content using the ReadToEnd() method; how do we read each line of data? Included in the StreamReader class is the ReadLine() method and if we called it instead of ReadToEnd(), we would get the first line of our files data:

The ReadLine() method reads the current line of the file, which in this case is the first line.

Since we told the StreamReader to read the line, it read the first line of the file and stopped. The reason for this is that the ReadLine() method only reads the current line (in this case, line one). We must keep reading the file until we reach the end of the file. How do we know when a file ends? The ending line is null. In other words, we want the StreamReader to keep reading the file (while loop) as long as each new line is not null (in other words, has data). To demonstrate this, let’s add a line counter to each line we iterate over so that we can see the logic with numbers and text: 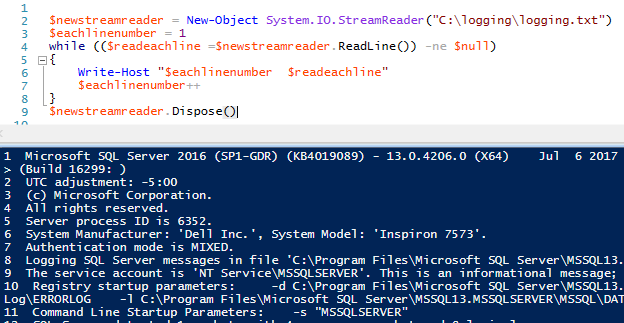 Our counter now features each line along with the line of the file’s text.

As StreamReader reads each line, it stores the line’s data into the object we’ve created $readeachline. We can apply string functions to this line of data on each pass, such as getting the first ten characters of line of data:

StreamReader returns the first ten characters of each line of data by using the Substring string method.

We can extend this example and call two other string methods – this time including the string methods IndexOf and Replace(). We only call these methods on the first two lines by only getting the lines less than line three: 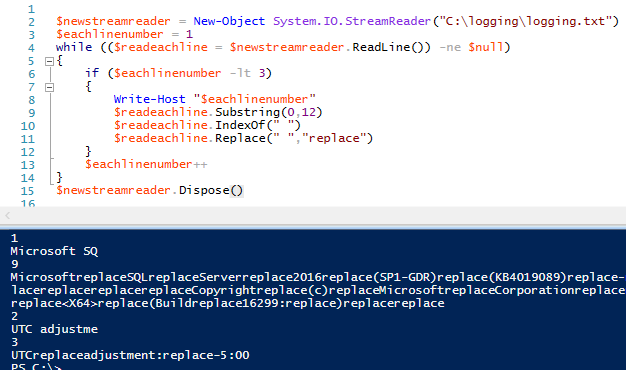 The Substring(), IndexOf() and Replace() string methods on the first two lines of the file. 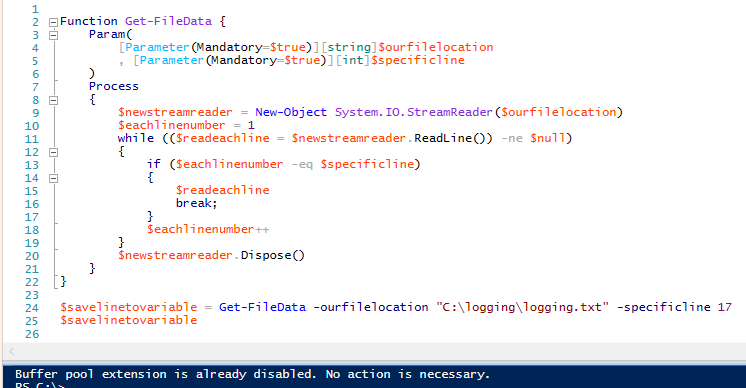 If we check, line 17 returns “Buffer pool extension is already disabled. No action is necessary.” correctly. In addition, we break the if statement – as there’s no need to continue reading the file once we obtain the line of data we want. Also, the dispose method does end the object, as we can check by calling the method from the command line in PowerShell ISE and it will return nothing (we could also check within the function and get the same result):

For custom performance, StreamReader offers more potential, as we can read each line of data and apply our additional functions as we need. But we don’t always need something to customize and we may only want to read a few first and last lines of data, in which case the function Get-Content suits us well. In addition, smaller files work well with Get-Content as we’re never getting too much data at a time. Just be careful if the files tend to grow in time.