In this article, we will talk about the query tuning features that were announced with SQL Server 2019.

Sometimes, tuning the queries can be a tough task for database developers or administrators. The most significant point of optimizing a query is to be able to interpret the query plan accurately because it gives lots of information about the query, in this way we can overcome performance issues more easily. At the same time, using the new features of the SQL Server 2019 can help to defeat performance issues without any code changing. In the next sections, we will see how query performance changes in two different versions of SQL Server and we will examine which features of SQL Server 2019 lead to this performance improvement.

In this article, we will use the Adventureworks2017 sample database, but this database size is very small to simulate performance problems of the example query, for this reason, we will use the Create Enlarged AdventureWorks Tables script to obtain an enlarged version of the SalesOrder and SalesOrderDetail tables.

Interpreting the execution plan of a query

Firstly, on the execution plan, we will right-click the select operator, and then we will check the completion time of the query. The elapsed time attribute indicates how long the query took to execute. This query was completed in 169 seconds. 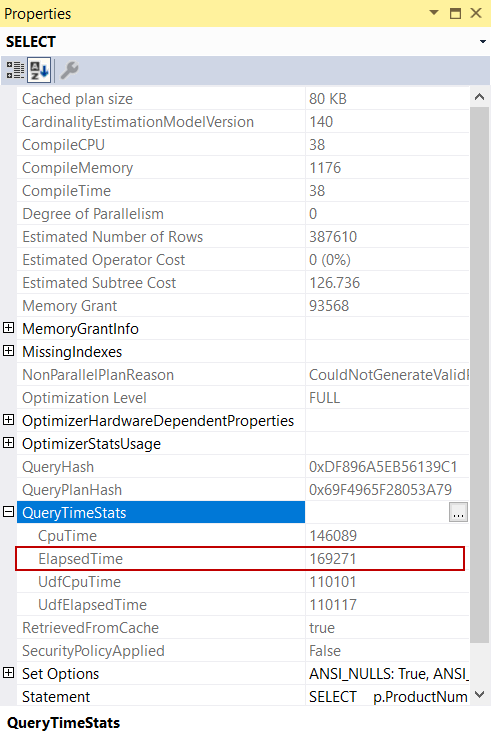 After that, we can ask the following questions:

Let’s look for answers to the questions together now.

User-defined functions generally cause performance problems in the queries because the query optimizer does not have any idea about the scalar-valued function code therefore it cannot include them into the query plan costs accurately. This behavior of the scalar functions can be likened to the black boxes.

The query optimizer estimates how much memory is required to execute a query using the estimated number of rows. At the same time, sort and hash join operations affect this memory demand. Outdated statistics cause the estimated number of rows to be calculated incorrectly so the required memory amount for the query to be calculated improperly. During the execution of the query, SQL Server cannot demand more memory dynamically. In this case, the query starts to use the tempdb database, and this issue causes performance problems. In our sample query execution plan, we can see a warning sign on the sort operator and it warns us about the tempdb spill problem.

When we hover the mouse over on the left arrow that is between the compute scalar operator and sort operator, we can see the dramatic difference between the actual number of rows and the estimated number of the rows. This case indicates outdated statistics.

For some queries, SQL Server recommends creating an index or indexes. These indexes may help to improve the performance of the query. On the other hand, there are some risks involved in applying these index suggestions because when SQL Server makes these index suggestions for a particular query but it has no idea about the entire workload of the database engine. The indexes may lead to reduce the performance of the insert, update, and delete statements. As a result, we should consider the advantages and disadvantages before creating the recommended index.

SQL Server 2019 was announced some new features that help to improve the performance of the query and the outstanding ones are:

Scalar UDF inlining can solve the performance problems of the scalar function because this new feature automatically transforms scalar functions into sub-queries or scalar expressions and it includes them in the query. So, the query optimizer generates more accurate and consistent execution plans and it can also generate parallel plans. Now we change the Adventureworks compatibility level to SQL Server 2019 and observe the effection of this feature on the execution plan. 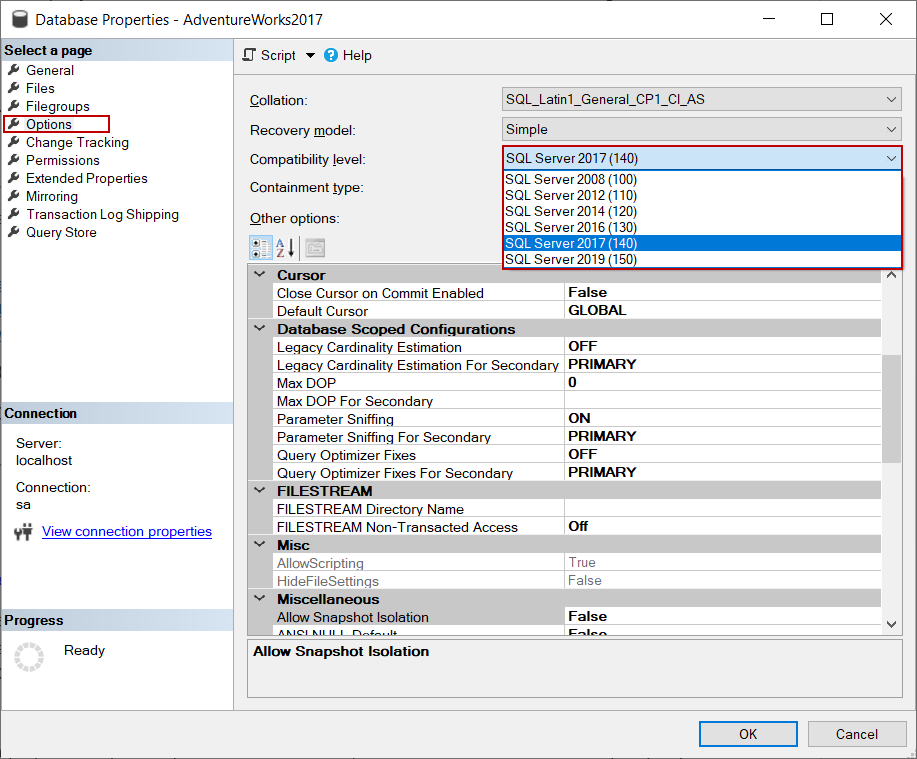 After changing the compatibility level of the database, we will execute the same example query and re-analyze the execution plan.

As we can see in the execution, the query optimizer generated a parallel execution plan and transformed the scalar function into a subquery. 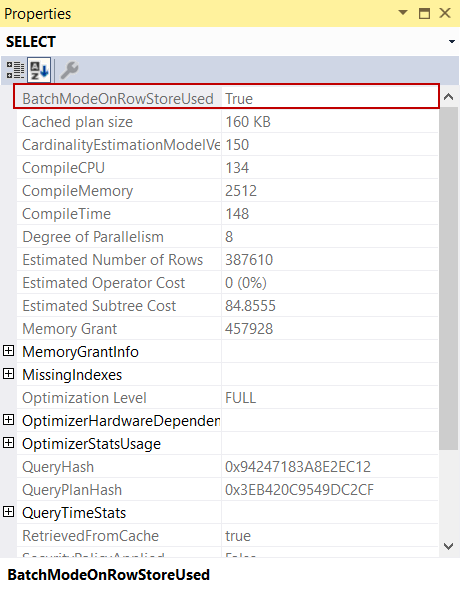 On the clustered index scan operator properties, we can find out more details about the batch mode processing. 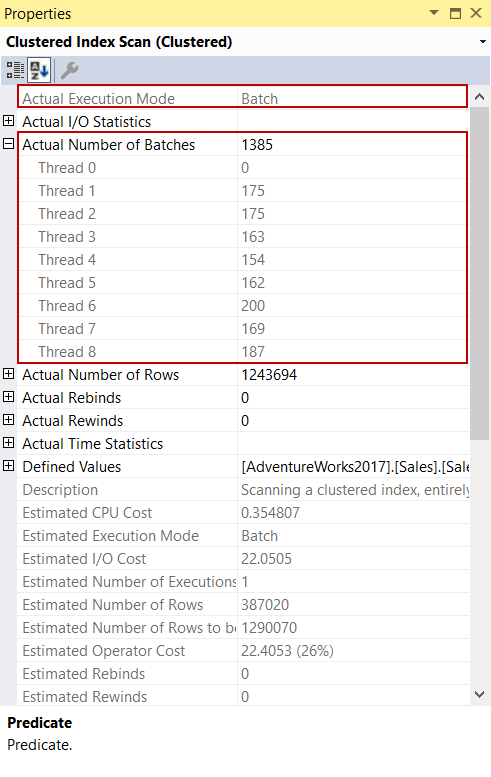 The above image shows that each thread has proceeded a bunch of rows through the batch mode on the rowstore feature. When we make a very simple calculation we can find out that the database engine proceeded ~ 900 rows at a time rather than row by row.

So far, we realized that the SQL Server 2019 features can be very helpful to boost the performance of queries without any code changing. The following chart illustrates the dramatic elapsed time difference between the two SQL Server versions. 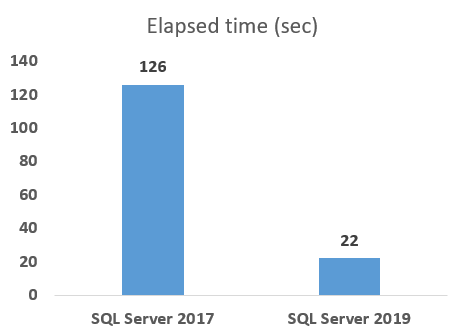 If memory allocation is insufficient for a query, in the next execution of the same query, SQL Server will assign more memory for it using the pre-executed query execution plans. This feature is called memory grant feedback. When we execute the sample query 3 or 4 times, we will see that the warning sign will disappear which was placed on the sort operator. When we re-examine the select operator properties, we will see the IsMemoryGrantFeedbackAdjusted attribute indicates YesStable value. It means that the memory grant feedback option has been applied to this query and grant memory is now stable. 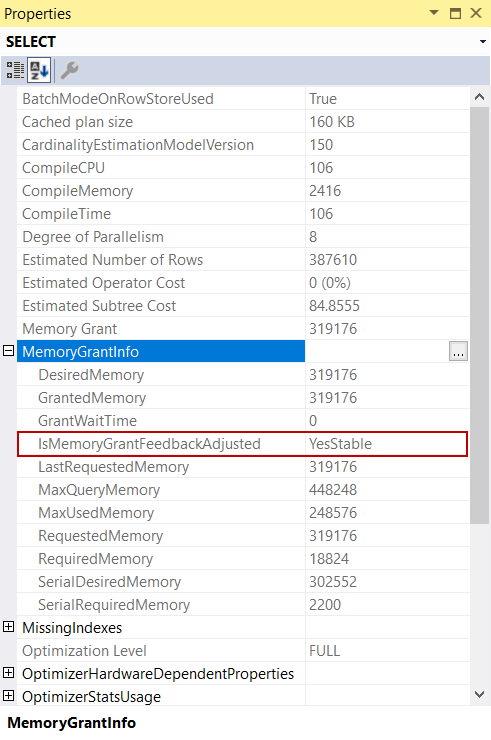 In this article, we have learned the query tuning feature details that were announced with SQL Server 2019 and we examined the details on an example. Particularly Scalar UDF Inlining and Batch Mode on Rowstore can improve the performance of the query without any code changes and this point is an impressive part of these features.