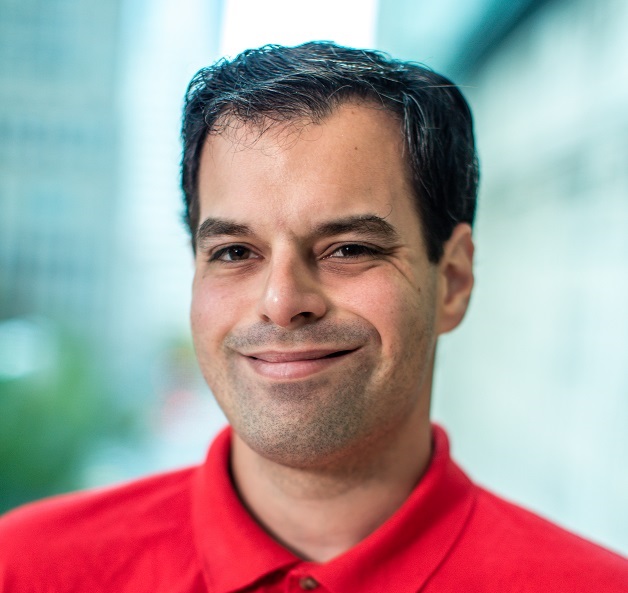 SQL Server 2016 includes a variety of query optimizer enhancements. Some of these have existed since the first previews while others were added later. This is an opportunity to discuss, test out, and validate the behavior and benefits of these changes!

What follows is a feature-by-feature walkthrough, with some demos, explanations, and the implications of each change based on my testing and analysis. Some of these changes are very straightforward and do not require any real testing, but discussion is still worth the time and effort 🙂

We can validate the current compatibility mode for any (or all) databases on a server via the sys.databases system view:

The results are a list of databases and their associated compatibility mode. This is a nice quick way to verify if any databases have an old compatibility level, or are not at a desired version:

Running this on my local machine returns a single database that is running under SQL Server 2008R2 compatibility mode:

Compatibility mode may be updated using an ALTER DATABASE command, such as this:

This TSQL will adjust AdventureWorks2014 to use SQL Server 2016 compatibility.

What changes when you move to compatibility level 130? Here’s a brief list with a bit of detail:

These changes are almost exclusively enhancements—each improving how execution plans or statistics are managed or adding parallelism into plans that previously could not benefit from it. If you’re using old has algorithms that are discontinued in SQL Server 2016, be sure to transition to newer ones that are supported prior to upgrading your compatibility level.

Foreign keys provide referential integrity between tables, ensuring that write operations on either do not render the related columns orphaned. Whenever a foreign key column is written, a check must occur of the referenced table to ensure the write operation doesn’t violate the foreign key definition.

In previous versions of SQL Server, this meant that scans or seeks would be performed against the parent table in order to validate a write operation, prior to it being committed. The specific operations required to validate the foreign key would be explicitly shown in the execution plan, for all referenced tables. In SQL Server 2016, the Foreign Key References Check is introduced to handle all referential integrity checks in a single step. Microsoft’s documentation indicates that this change will greatly simplify execution plans and reduce compilation time for the execution plan.

What does this mean for any existing keys and the queries that write to related columns? Let’s take a few minutes to run some tests and find out exactly how this new operator performs and compares to what we experienced in previous versions.

We’ll start with some simple updates on Production.Product (in AdventureWorks) under compatability mode 120, which indicates that we will use the optimizer rules taken from SQL Server 2014:

These updates each are affecting two foreign-keyed columns, both of which link back to Production.UnitMeasure. As a result, when we update them, it is necessary to validate referential integrity for each value added here:

These plans each show that each individual update is check for a valid value in the parent table. Note that in the first update statement, we use the same value twice. Common sense would tell us that it should only be necessary to validate this once, but the optimizer will check Production.UnitMeasure twice anyway. These checks take the firm of the two clustered index seeks seen in each of the above execution plans.

With SQL Server 2016, we are promised a new operator that will make checks such as these more efficient and better documented. The latter is a useful point, as in large queries, it might not be immediately obvious which operators refer to a referential integrity check and not the active query itself.

Let’s update our compatibility mode to 130, which will allow the use of the new optimizer enhancements: 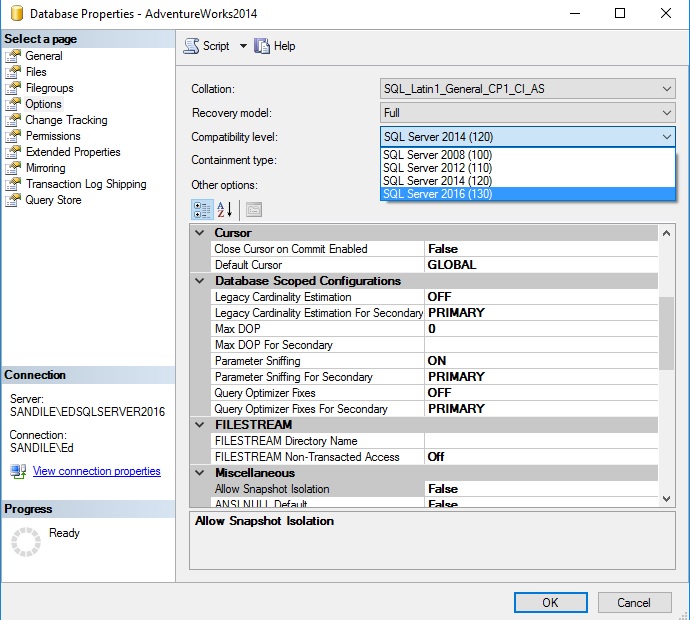 Now that we can make use of the new operator, let’s test it with one of our updates from above:

The resulting execution plan is the same as earlier:

Well, that was uneventful. We hoped for a new, shiny plan operator and instead got exactly the same results as before. Let’s try a few other queries and see what changes we can uncover:

If updates don’t seem to get what we want, we should also try out some inserts and deletes. Running the above queries will add a row to Production.Product and Production.UnitMeasure, respectively, and then delete those rows. The resulting execution plans for the above queries are as follows:

I didn’t bother to fit the entire plans into single images. It’s clear from the number of tables being queries above that we are not getting a clear foreign key operator, and are instead getting the same plans we’ve always gotten previously. What do we expect to see here? The following image is from an MSDN blog post:

This shows clearly that the long string of referential integrity check scans/seek are replaced with a single simplified operator that presumably outperforms the previous methodology. The following TSQL is what they used to test this new operator:

The resulting execution plan I receive is the same as the old plan shown above. Since it is unclear why I am unable to get the desired results, I’ve left a note on the article to get more info on why this isn’t working. If there is some feature or setting I am missing, or if this operator is not yet available for the current RTM release, then it’ll be good to have that information to work with.

If an update on the new operator is received, either via the MSDN post or some other channel, I’ll update this article with the details.

The MSDN article referenced above can be found here

I had some high hopes for this change, being that the current execution plans used to enforce referential integrity tend to be rather unintelligent. To be sure, though, I installed a separate SQL Server 2016 instance on another computer, and ran the same queries from above. Results were the same in that I was unable to make use of the new plan operator. It’s possible this feature will become available in a future revision of SQL Server 2016, so I’ll keep an eye out, and if this feature becomes usable, I’ll be sure to document and test the heck out of it 🙂

In previous versions of SQL Server, when a hotfix or cumulative update was released, any query optimizer improvements bestowed by that update would not immediately go into effect. Instead, it was necessary to turn on trace flag 4199, which would then enable any new optimizer features originating from any installed updates to SQL Server.

This off-by-default methodology worked, but was a bit obfuscated and not clear to administrators that this was the intended behavior that they should work with. Often, patches would be installed, the trace flag not turned on, and thus no optimizer changes were realized until a major upgrade occurred. This is typically acceptable as we shouldn’t change optimizer behavior unless a problem exists that needs resolution, or if we upgrading to a new major version.

Specific trace flags used to be used prior to trace flag 4199 for enabling query optimizer enhancements via an individual hotfix. This functionality was intended for scenarios where a distinct bug is in need of patching, and the enhancement needed as part of the fix. A variety of trace flags from 4101 – 4135 (non-inclusive) handled these specific hotfixes, which were no longer utilized after trace flag 4199 was created.

Each version of SQL Server comes with its share of query optimizer changes. Some are paired with new features, while others are intended to improve existing functionality. At least one of the new features, the foreign key referential integrity operator, isn’t available yet, but hopefully will make its appearance in a soon-to-be released revision.

The compatibility mode guarantee provides significantly more control over how new features affect the optimizer and ensures that upgrade processes can be better designed. The guaranteed knowledge of how features will behave provides a level of confidence that was not as easily available in previous versions of SQL Server.

Keep an eye out for more! It is not unheard of for Microsoft to release or document additional improvements in later service packs. These can be innocuous bug fixes or possibly cool new DMVs, optimizer enhancements, or feature additions!