In this article, we will talk about two query optimization myths and these myths can be changed according to the characteristics of the queries. Every query can exhibit different behaviors according to data distribution, SQL Server version, database settings, and other tons of parameters therefore the fixed ideas may not help to overcome the query performance issues. In the next part of the article, we will focus on the following most known discourse:

The execution plans are a vital tool that helps to figure out all behaviors and data flow of a query. Execution plans are generated by the query optimizer mainly consider CPU, IO, and memory metrics. So, when we understand a query execution plan properly we can solve the query performance issues more easily. Anyway, to cut a long story short, let’s get into action and work on our examples.

In this article, we will use the AdventureWorks database and we will also use the enlarging script that helps to obtain a larger copy of this database.

A query plan is worth a hundred words

Practically, for the query plans, we need to read an execution plan from the right to the left and from the top to the bottom. However, before starting to read the execution plan of the select statements, we need to glance at the select operator because it contains some different statistics from the other operators. This method always helps us when we deal with query optimization.

The Cardinality Estimator estimates how many rows will return when a query is executed. The estimated information uses by the query optimizer to calculate the memory requirement of a query. So, if we don’t have any valid reason, we need to enable the latest cardinality estimator model for query optimization and it will be a correct approach. In our example, the query has been executed in SQL Server 2019 for this reason CardinalityEtimationModelVersion shows the value 150. The NonParallelPlanReason attribute shows why the query optimizer does not generate a parallel execution plan. EstimtedDOPIsOne value expresses that the maximum degree of parallelism setting is determined as one. The Optimization Level attribute shows the FULL and it means that the optimizer works well and completes all phases of the query optimization. The WaitStats attribute shows which wait type has occurred during the execution of the query and this information may help to resolve bottlenecks of a query. As a last, we need to consider QueryTimeStats options which help to realize the execution time statistics. We can interpret the execution plan by tracking the numbers on the operators but the select operator includes so valuable details, therefore we have to look at the select operator before reading the execution plan.

Why a merge join is used in this query plan

Merge join is the most effective way to join type for the large datasets but the two input datasets must be in a sorted manner before processing by it. In the sample execution plan, the clustered index scan operators have returned their result sets in a sorted manner because data is sorted according to the SalesOrderID column so the data engine avoids extra sort activity. We can realize this situation when we look into the Ordered attribute of the clustered index scan operator. 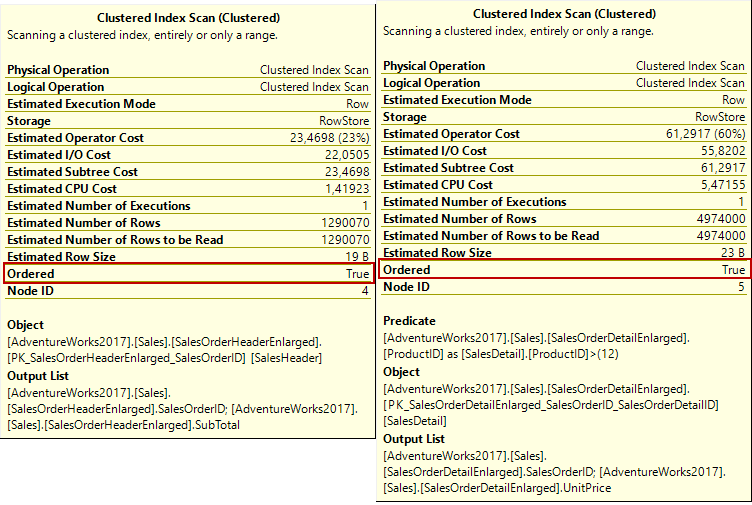 Clearly seen in the above image, the first execution plan cost is lower than the others, for this reason, the optimizer has decided to use hash match join. Understanding the query optimizer cost-based approach is very important for query optimization because execution plan selection is based on this approach.

Which is faster? Merge Join vs Hash Match Join

The above graphic illustrates that the hash match join has boosted the performance of the query despite that it has consumed much memory.

However, we should not overlook one point about the execution plan that includes hash match join. When we hover over the mouse into the clustered index scan operator we will come across an interesting thing. SQL Server has accessed the data using a new feature, named Batch Mode on Rowstore. This feature can handle multiple rows at one time so it helps to improve the performance of the query and hash match join. 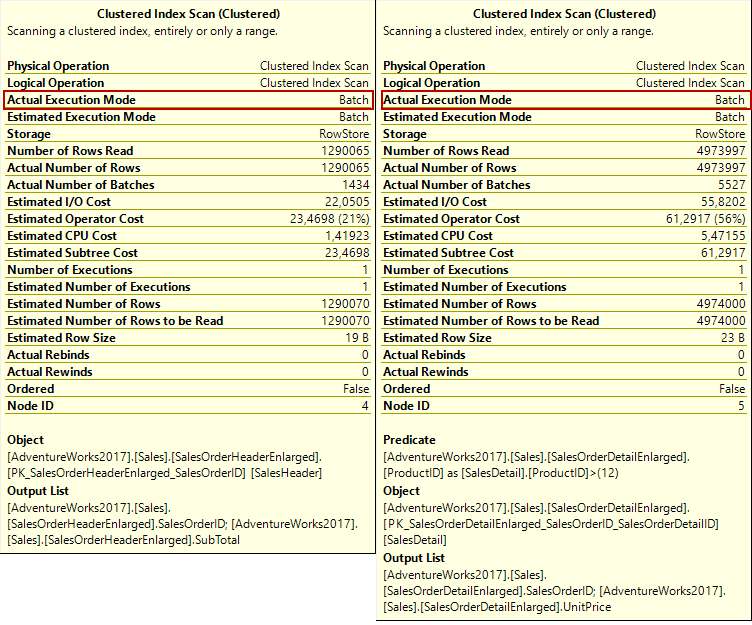 For this execution plan, the hash match join operator will process the mode in batch mode so it also improves the performance of the query.

Keep Calm and Make Your Choice

In this part of the article, we will prevent the query optimizer to use the merge join operator in their execution plans. The QUERYRULEOFF is used to eliminate some rule for a specific query. When we add the JNtoSM rule after this query hint, the query optimizer eliminates the execution plans which include the merge join operator. In this circumstance, there are only two candidates left, the nested loop join or hash join. Now, execute the following query and look at its execution plan

In the execution plan, we see a new operator and its name is Adaptive Join. With the help of this feature, SQL Server decides the join type on the runtime of the query. If the row count is under the Adaptive Threshold value it decides to use Nested Loop join otherwise it will use the Hash Match Join. So that, this approach helps in the query optimization process automatically. For our sample query, adaptive join has decided to use hash match join, because the Actual Join Type property shows this situation.

In this article, we have talked about some query optimization myths. When we deal to improve query performance, we have to analyze the execution plan with all details because lots of question answers are hidden on it. At the same time, we have to ask them questions, if they talk about the below scenarios: