This article talks about Python scripts for creating pivot tables in multiple ways.

You might use PIVOT tables in Microsoft Excel for data analytics, preparing reports. It helps us to extract meaningful information from a large data set. We can transpose row into column along with aggregations on it.

We can generate PIVOT data in different ways in SQL Server.

We can use Recursive CTE, While loop, SQL Concatenation, FOR XML PATH or CLR

Python is an interactive and easy to use programming language. We explored many use cases of Python scripts on SQLShack. This article explores the use of Python for Pivot data.

We will explore a few methods that you can use in Python for a Pivot table. For the demonstration, create the following table and insert data into it.

Open the following attachment to insert data into this table.

For this demonstration, I am using data stored in the [SalesData] table of the SQLShackDemo database.

We want a PIVOT table as highlighted in the following screenshot. Here, we require Quantity, SubTotal and UnitPrice for pivot column ProductName.

For detailed instructions, refer to this article How to use Python in SQL Server 2017 to obtain advanced data analytics.

Once we have prepared the environment, execute the following Python code, and you get the output per our requirement specified above.

Similarly, let’s look at another example of the following source data. 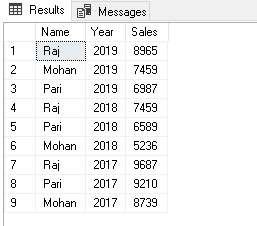 We want to generate pivot data in two formats.

You get the following PIVOT table in the output and it satisfies our first requirement.

For the second requirement, let’s add a new row for Raj and now we have two entries for Raj in the year 2019.

Now, for this requirement, we add [Year] column as well in the index columns for Pivot.

In the output, we get Pivot for employees along with yearly detail. We can note that for Raj it combined both entries of year 2019 and give a sum of sales in pivot output. 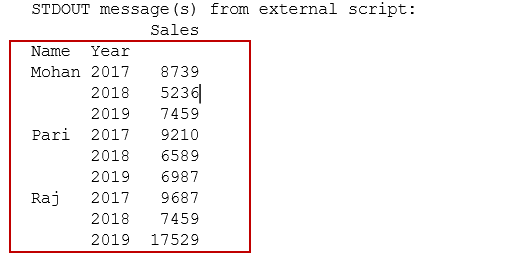 In the previous examples, our source data was in SQL tables. Python can read CSV, Excel files as well using pandas’ modules.

We can store the CSV file locally in a directory, or it can read directly from a Web URL. In this demo, we use a CSV file stored on a Web URL.

In the following code, we use pd.read_csv function and input a Web URL as source data. Python directly takes data from this URL, but you should have an active internet connection for it.

Later, we define index columns (Team, Salary) and values (college) for it. We also use aggregate function np.sum on this.

In the output, we can see a few records show zero in the college column. We do not have a college name in the CSV file for those records, and in PIVOT, it shows zero for the NULL or blank cells.

Suppose we do not want those records in the pivot table. Let’s drop these records having blank cells in CSV using the dropna() Python function. We use argument inplace=true to make changes in the data frame itself.

The complete code after adding the dropna() function is below.

Now, execute it and notice the change in pivot tables. It eliminated records with NULL values in the output as shown in the following image.

We can use groupby and lambda functions as well in the Python scripts for Pivot tables. For this example, I have a data set of a few states of India and their cities in a SQL table. 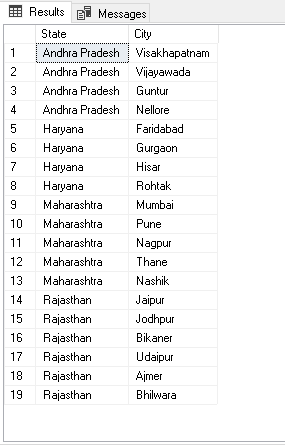 We need a pivot table from this data. In the output, it should list all cities for a state in a column; it should use || as a city name separator.

We use the following function for our scripts.

Execute the following Python script to get the desired pivot data.

In this article, we explored Python scripts for creating PIVOT tables similar to Microsoft Excel. You should explore Python as it is a popular, versatile, and useful programming language.