In the previous articles of this series, we built the bridge that leads us to the best way of migrating our SQL workload to Microsoft Azure, by showing how to create the databases migration strategy that contains a deep study of the current environment and the available options in Azure to replace the on-premises setup, which we tried to make it easier by providing all Azure database services and the workload that fits each service, and finally, we introduced several Microsoft tools and services that can be used to assess the current setup, provide migration guidance steps and migrate the databases to Microsoft Azure services with the minimal downtime.

I recommend you go through these articles before stepping to this point of the article’s series:

In this article, we will show how to migrate a SQL Server database from an on-premises server to a SQL Server instance hosted in Azure VM.

Although the cost of hosting your SQL Server instance in an Azure VM is higher than using other PaaS services, still can be controlled by the compute and storage size of the VM, it comes with many benefits, include:

Before migrating your SQL Server databases to a Microsoft Azure VM, you should use the discovery and assessment tools to make the migration process clear and smooth. These tools include the Microsoft Planning and Assessment tool that can be used to discover the on-premises environment configurations and components, the Data Migration Assistant tool that is used to assess the on-premises databases for any blocking or compatibility issue that may affect the migration process and the Database Experimentation Assistant tool that is used to assess the target server for the current workload type.

After assessing the current environment, we should decide which license type we will use for the SQL Server Virtual Machine, where Microsoft supports both the pay-as-you-go (PAYG) model, in which the license cost will be included in the per-second billed cost, and the bring-your-own-license (BYOL) model, in which you can use your own SQL Server license in the Azure VM and billed for the VM usage only.

The next thing to consider here is the size of the virtual machine that will host the SQL Server instance in Microsoft Azure. The size of the machine should consider on-premises workload handling and growing requirements. Take into consideration that the minimum VM size for SQL Server Enterprise editions DS3_v2, and DS2_v2 for the Standard edition. For more information about the VMs sizing in Azure, check the Size for Virtual Machines in Azure.

Prepare a VM on Microsoft Azure

In the “Select SQL deployment option” page, choose the image that will be used to install the Operating System and the SQL Server instance, based on the license and version requirements, then click Create, as below:

In the Basic page of the Create a Virtual Machine window, provide the resource group under which you will create the VM, the region where the VM will be hosted, a unique name for the VM, the size for the VM and the administrative account that will be used to connect to that VM. After providing the required information, click on Next to configure the SQL Server Settings: 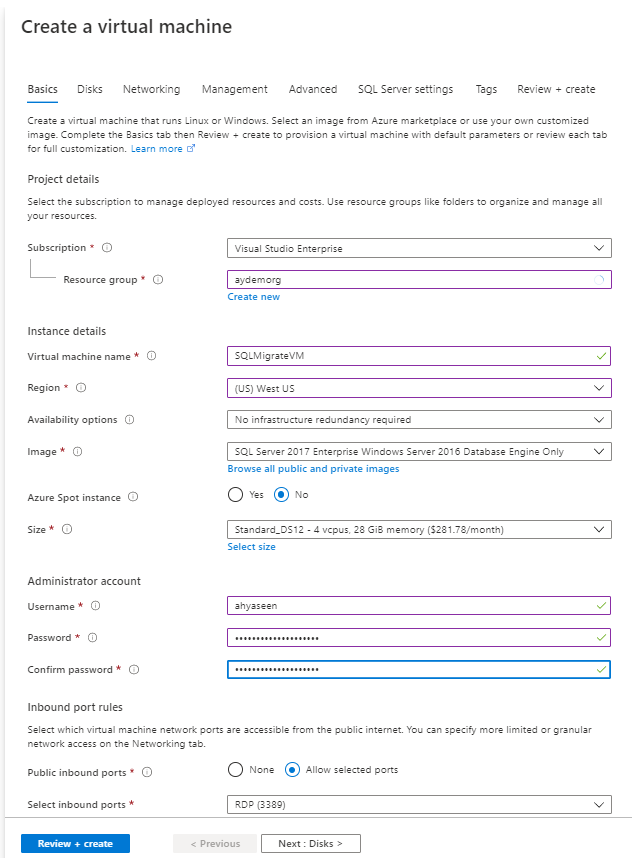 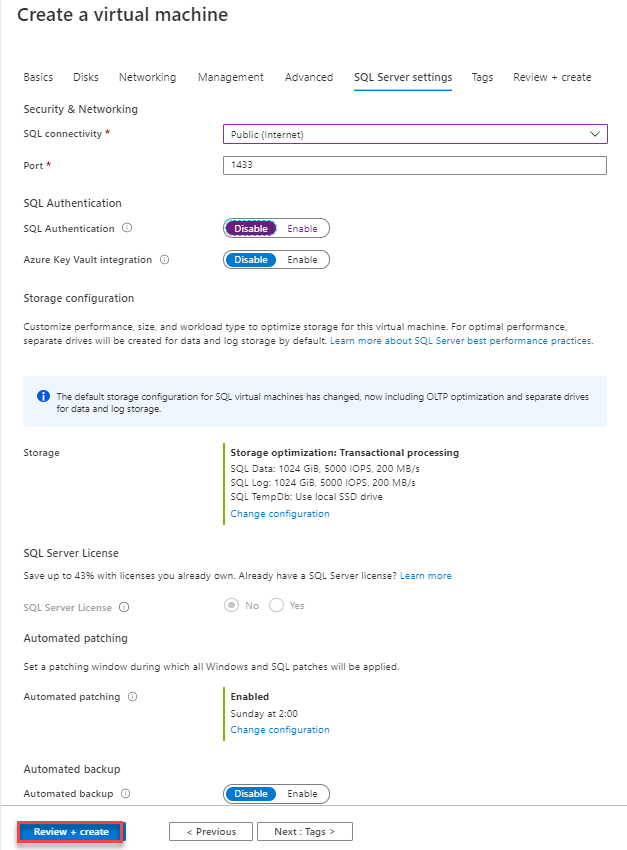 Once the SQL VM is created successfully, open that VM from the Virtual Machines page and click on the Connect option to create a connection to that machine, as shown below: 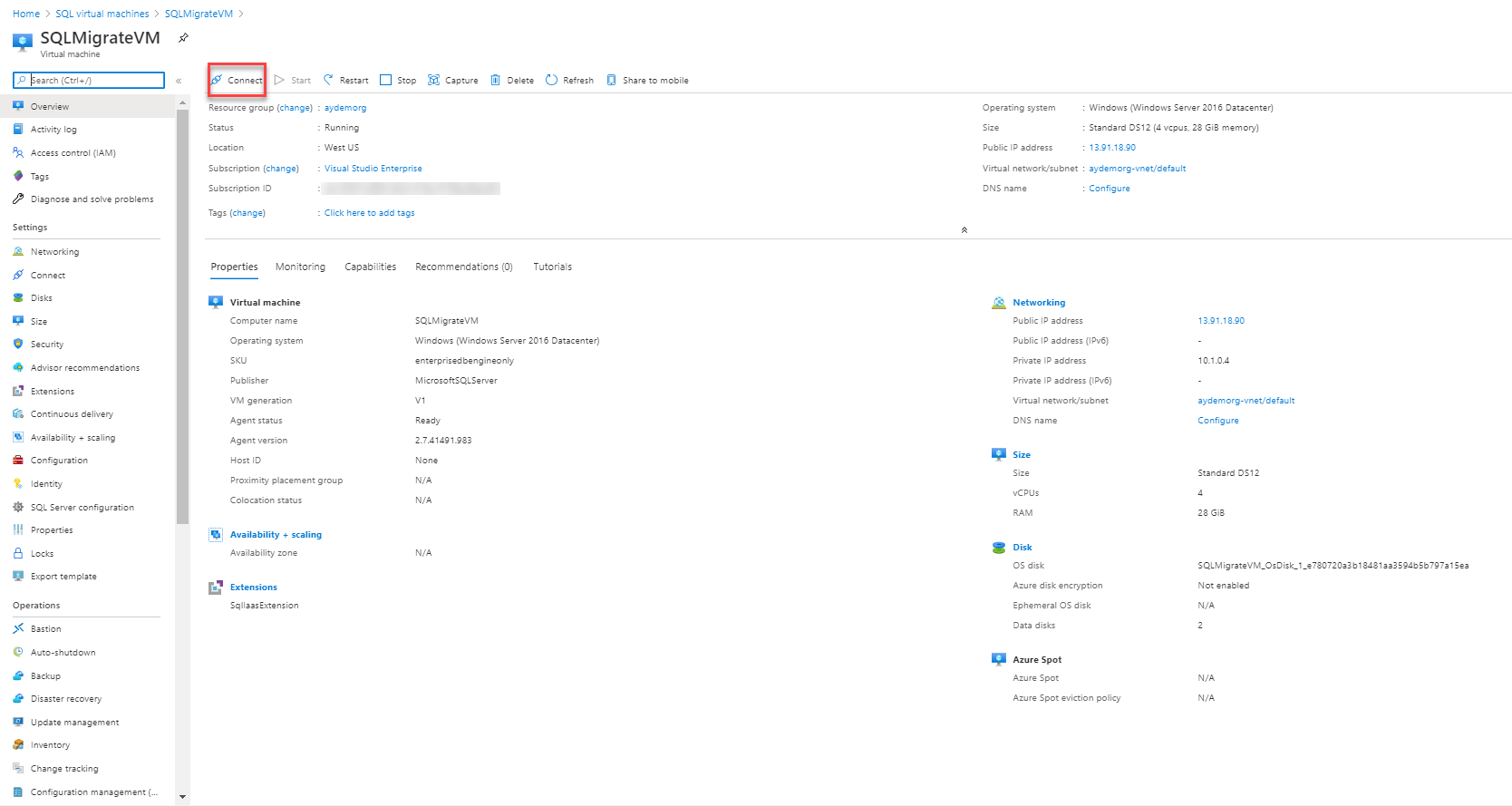 From the Connect page, we need to connect using RDP as this is a Windows machine. Click on Download RDP File option to download locally a .exe file that will be used to connect to that Microsoft Azure VM, as follows: 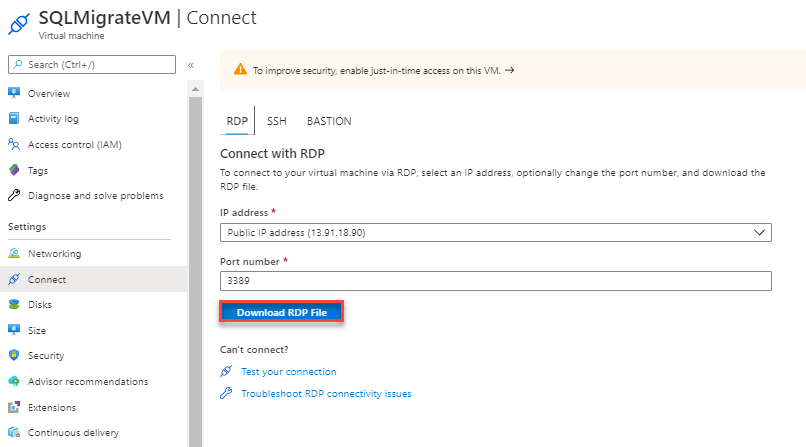 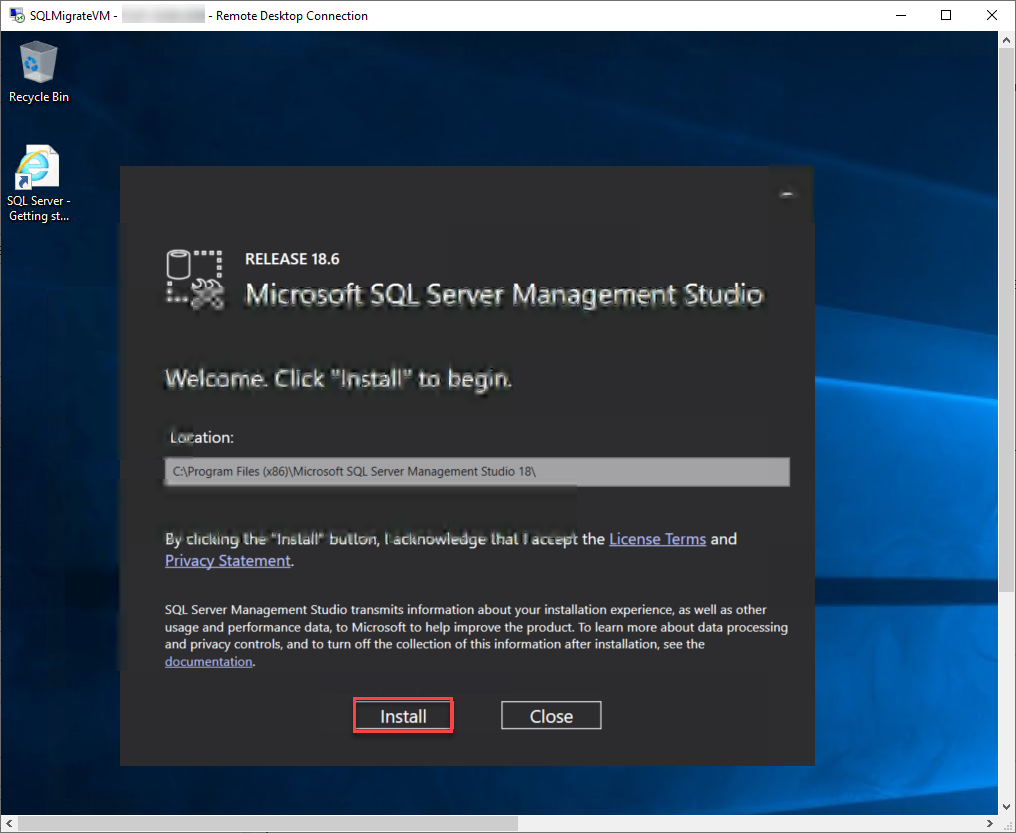 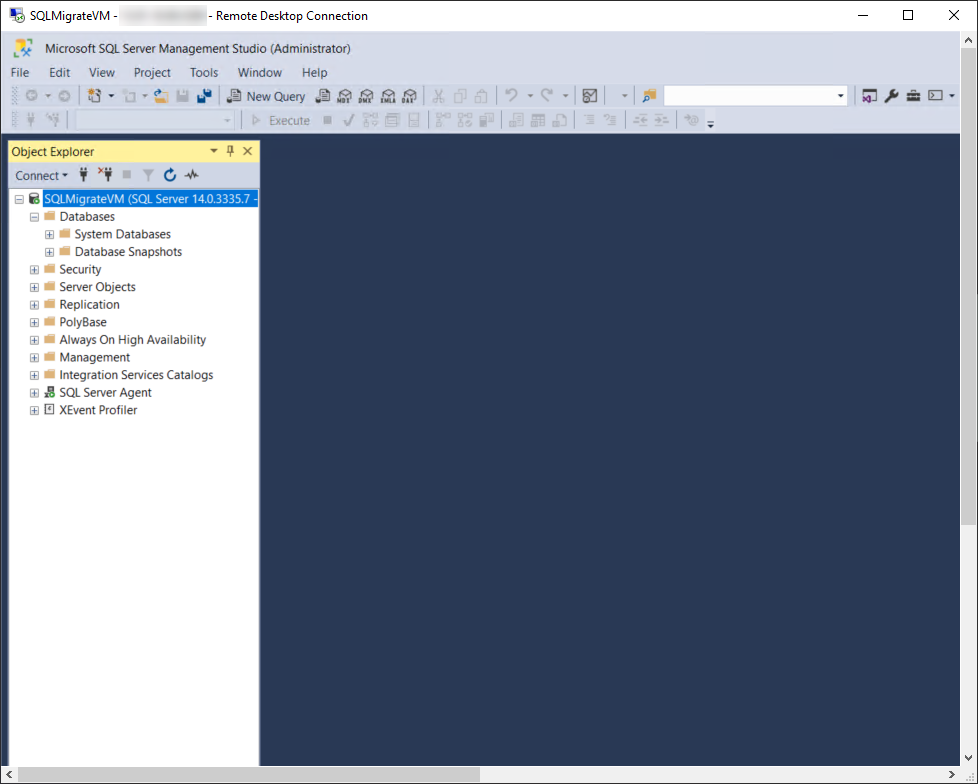 Based on the provided migration method, you can choose the method that meets your requirements and fits your own scenario.

In this demo, we will take a compressed backup and configure the destination of that backup as the Azure Blob Storage URL, where you will be asked to provide the URL for the Azure Blob container where the backup will be stored and the Shared Access Signature to authenticate the access to that container, as shown below: 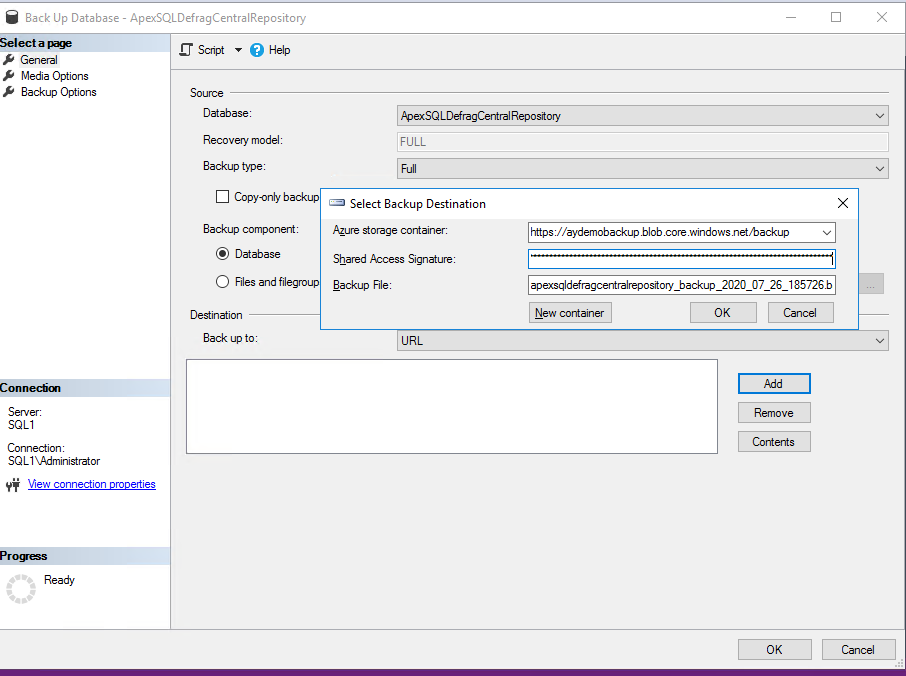 After completing the backup process, we will restore the database backup file from that URL to the SQL Server instance hosted in the Azure VM, again by providing the URL for the container where the backup is stored and the Shared Access Signature to authenticate the access to that container, as shown below: 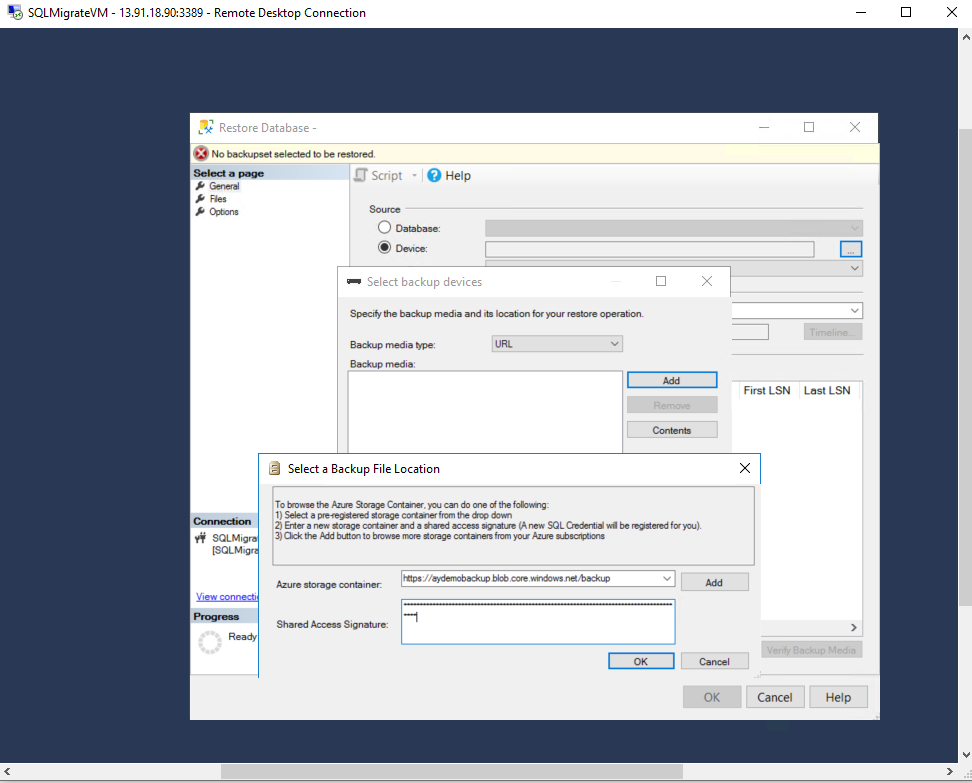 When you provide the container URL and SAS key, you will be able to access the container and choose the backup file that will be restored to that SQL Server instance, as below: 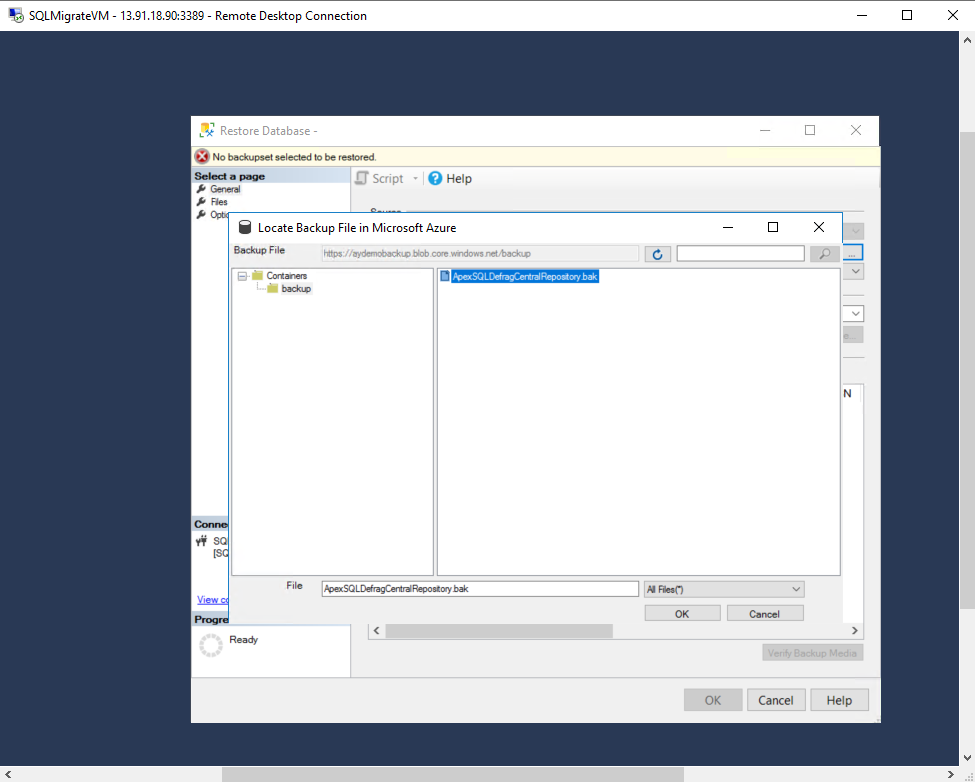 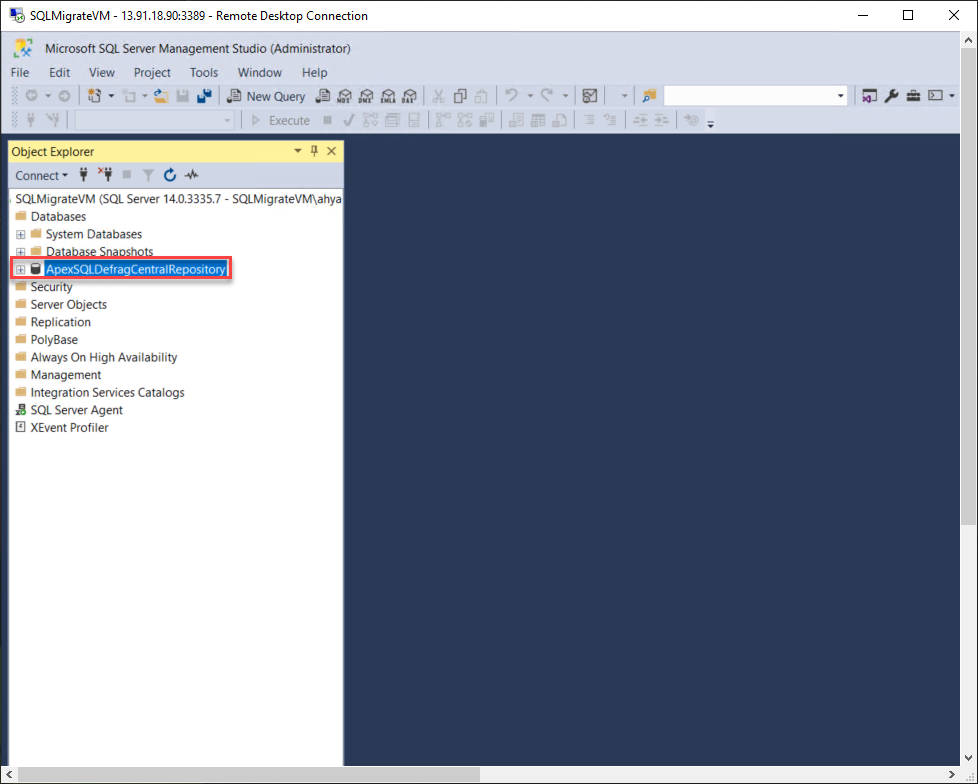 In this article, we went through the different considerations and methods that can be used to migrate an on-premises SQL Server database to a SQL Server instance hosted in a Microsoft Azure VM.

In the next article, we will see how to migrate a SQL Server database from an on-premises server to an Azure SQL Database. Stay tuned!